Overclocking Core i7: A Tale of Two Retail Processors…

To facilitate our Core i7/X58 motherboard testing, we have been snapping up retail CPU’s from a variety of outlets in the US and Europe. Since most of the users adopting this platform are opting for a Core i7 920 as their mainstay processor, we have been on a buying spree for this particular model while also dropping some hard earned cash for a couple of the 940 and 965XE retail processors.

I purchased my first 920 over three weeks ago from SCAN UK. This particular CPU is a 3838A batch processor, which I proceeded to test in the Foxconn Bloodrage and EVGA X58 SLI motherboards. It’s the same old story really when it comes to clocking, I scoured the forums, spoke with Gary and Kris (who had a head start on me with this platform) and asked them the lowdown of what to expect in terms of voltage related scaling hoping that I had something at least as good if not better than their retail processors.

Like many others out there, I was hoping for a processor that could clock to 4GHz and beyond at fairly low processor core and VTT voltages. This together with an IMC that could handle triple channel speeds well above 1600MHz, actually, make that 2000MHz. The kind of speeds I’d seen posted on various overclocking forums using the 920 processors had voltages just tolerable enough for 24/7 use. I must also add at this point that some of the testing we do on these boards falls well outside the 24/7 bracket. An ever increasing number of boards are released solely with benchmarking in mind, a growing segment of the industry that seems to be on the fringe of demanding complete segregation from mainstream products due to its specialized needs. 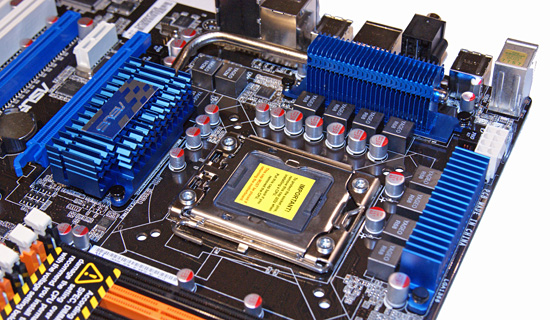 A large part of testing these boards involves running both entry-level and high-end components well out of specification ranges, just to see what a particular board can do if pushed or if it will go up in a ball of smoke, something Gary seems to master at times. This may seem trivial to most of our readership, but it’s an ever growing part of the enthusiast sector and somebody around here has to test it, so in comes my need for decent components, especially processors in this case.

While this processor matched the ‘international average’ for core voltage scaling, I discovered that I had to apply ridiculous levels of VTT/Uncore voltage to get it to boot at anything over 185BCLK. A 3.8GHz clock speed fell with relative ease, but pushing up to 4GHz, well that’s where things became real tricky. This processor seems to stop in its tracks with VTT voltage levels over 1.36V (just outside the warranty maximum by the way) or so, causing both of the motherboards to halt during POST with a C1 error.

Manipulating voltages within the OS using motherboard specific software tools can circumvent this condition to an extent, but the voltage has to be ramped up in small steps. Either way, 4GHz stable on this particular processor is way more hassle than it could ever be worth in a 24/7 system so I am stuck at 3.8GHz. Ok, this seems a bit demanding of me, a free 1.2GHz overclock from stock and I’m nowhere near happy! In fact, at this point I was pretty much convinced that both of the motherboards I was testing were duff, not the CPU, especially when I looked over at some of Gary’s early results on the same boards, as well as results of forum members.

I conferred back with Gary on his results, he’s got three retail 920s in his repertoire (with a fourth on its way) and his results are erratic in this department too. One of his processors needs high levels of Vcore to make 4GHz possible, well in excess of 1.50V, and refuses to POST with Bclk ratios set higher than 200, regardless of VTT/Core voltages. The other two (3837A)are better than mine for IMC VTT scaling and can also handle 6GB triple channel memory at 2000+MHz with a little persuasion. Something I found impossible on my 3838A processor with 3GB of memory let alone 6GB. Also, both of his processors allow for 3.8GHz operation at stock or below stock core voltages with VTT near 1.15V. Both processors allow clock speeds to reach about 4.3GHz on 1.45V of VCore, but VTT required is near 1.425V on air cooling with a 2:8 memory ratio, change the memory ratio to 2:10 for DDR3-2000 and VTT requirements hit 1.50V, which also happens to be the maximum amount his processors will allow before throwing up a C1 code on POST.