I refuse to make any further references to the Turbo buttons on PCs from the 80s and early 90s in this section :)

Intel's Core 2 processors have historically been quite overclockable, however most users don't overclock and thus they get no benefit from the added headroom in Intel's chips. Enthusiasts obviously benefit and get the performance of the best CPUs at much lower price points thanks to overclocking, but the rest of the world has all of this untapped power sitting under their heatsinks.

Varying clock speed according to system demands and temperature is nothing new, but it's predominantly done in the downward direction. At idle periods CPU clock speeds are dropped, when temperature limits are reached the same also happens, but why not boost clock speed when conditions are ideal?

I measured the impact of Nehalem's Turbo mode on the top bin Core i7-965, which runs at 3.2GHz by default but can ratchet up to 3.33GHz or 3.46GHz depending on whether the workload is single or multi-threaded: 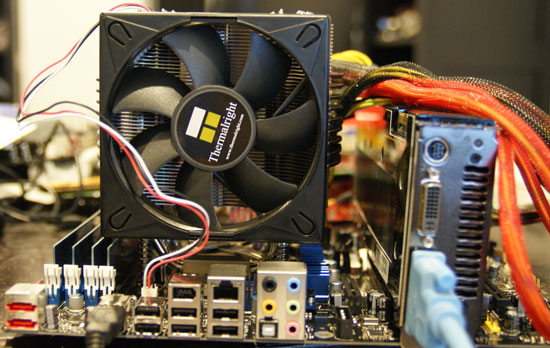 Now these tests were conducted on an open-air testbench with an aftermarket cooler by Thermalright, we wondered what would happen if we used a retail Intel HSF and stuck the Core i7 in a system with a Radeon HD 4870 and a 1200W PSU. The CPU actually ran a lot warmer and Turbo Mode never engaged, pretty much as expected.

With Nehalem it may be worth investing in one of these oversized heatsinks, even if you're not overclocking, you'll get a couple of extra percent in the performance department if you can keep the cores cool.