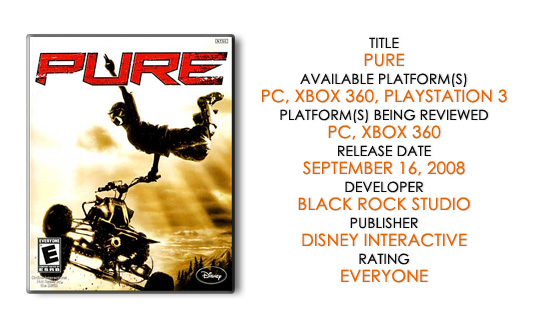 When it comes to games, the line between realism and fantasy slices nearly every genre into two parts. While each while each section is rarely the other's equivalent, gamers often tend to gravitate toward one or the other. This raises a few questions. Would you rather wield a knife or a flaming samurai sword? Would you rather explore an office complex with a flashlight or dungeon catacombs with a lantern? Closer to the game at hand, would you rather your vehicle catch twenty feet of air or a thousand? The good folks at the newly coined Black Rock Studios show us what side they're on by taking the fantastical approach to off-road racing with PURE, a freestyle ATV racer whose focus is on frantic speed and exaggerated aerial acrobatics.


In a world where new IPs are few and far between, it's always nice to see a fresh new title rise up among those with a number 2, 3 or 4 in them. While PURE's style of gameplay isn't anything we haven't seen before, it certainly puts its best foot forward at being the best in its class. So, what exactly is its class?

PURE finds its footing among off-road racing games like MotorStorm and DiRT, with trick pulling elements that are more reminiscent of snowboarding or skateboarding games like SSX or Tony Hawk respectively. As in all racing games, speed is definitely on the agenda. However, only a combination of speed and freestyle stunts will put players in the winner's circle.