Today is all about the Radeon HD 4870 X2, the same card we previewed last month but AMD is quietly announcing a few other products alongside it. The 4870 X2, internally referred to as R700, is a pair of RV770 GPUs on a single card - effectively a single-card, Radeon HD 4870 CrossFire (hence the X2 moniker). Like previous X2 cards, the 4870 X2 appears to the user and the driver as a single card and all of the CrossFire magic happens behind the scenes.

Unlike most single-card multi-GPU solutions, the 4870 X2 is literally two Radeon HD 4870s on a single card. The clock speeds, both core and memory, are identical and this thing should perform like a pair of 4870s (which is pretty quick if you have forgotten). The only difference here is that while the standard Radeon HD 4870 ships with 512MB of GDDR5 memory, each RV770 on a X2 gets a full 1GB of GDDR5 for a total of 2GB per card. 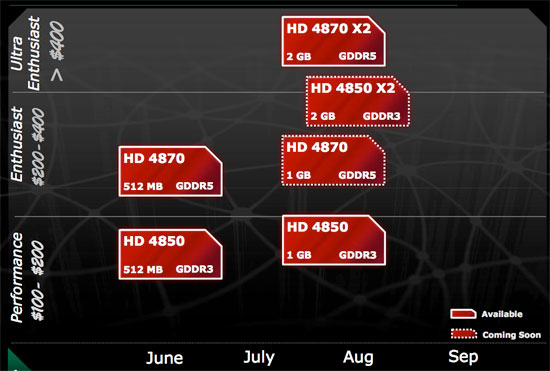 ...which leads us nicely into some of AMD's other products that will be coming out in the next month or so. There will be 1GB versions of both the Radeon HD 4870 and Radeon HD 4850.

Then at $399 we'll see a Radeon HD 4850 X2, which as you can probably guess is a pair of Radeon HD 4850 GPUs on a single card, but with 2GB of GDDR3 and not GDDR5 like the 4870 X2. As interesting as all of these cards are, we only have the 4870 X2 for you today, the rest will have to wait for another time. But it is worth noting that if you are interested in buying a Radeon HD 4870/4850 and keeping it for a while, you may want to wait for the 1GB versions as they should give you a bit more longevity.

Enough with being distracted by AMD's product lineup, let's talk about the competition.