Putting it all Together - Return of the Ring Bus

Intel is keeping two important details of Larrabee very quiet: the details of the instruction set and the configuration of the finished product. Remember that Larrabee won't ship until sometime in 2009 or 2010, the first chips aren't even back from the fab yet, so not wanting to discuss how many cores Intel will be able to fit on a single Larrabee GPU makes sense.

The final product will be some assembly of a multiple of 8 Larrabee cores, we originally expected to see something in the 24-to-32 core range but that largely depends on targeted die size as we'll soon explain: 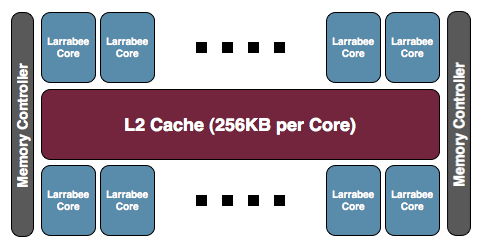 Intel's own block diagrams indicated two memory controller partitions, but it's unclear whether or not we should read into this. AMD and NVIDIA both use 64-bit memory controllers and simply group multiples of them on a single chip. Given that Intel's Larrabee will be more memory bandwidth efficient than what AMD and NVIDIA have put out, it's quite possible that Larrabee could have a 128-bit memory interface, although we do believe that'd be a very conservative move (we'd expect a 256-bit interface). Coupled with GDDR5 (which should be both cheaper and highy available by the Larrabee timeframe) however, anything is possible.

All of the cores are connected via a bi-directional ring bus (512-bits in each direction), presumably running at core speed. Given that Larrabee is expected to run at 2GHz+, this is going to be one very high-bandwidth bus. This is half the bit-width of AMD's R600/RV670 ring bus, but the higher speed should more than make up the difference.

AMD recently abandoned their ring bus memory architecture citing a savings in die area and a lack of need for such a robust solution as the reason. A ring bus, as memory busses go, is fairly straight forward and less complex than other options. The disadvantage is that it is a lot of wires and it delivers high bandwidth to all the clients on the bus whether they need it or not. Of course, if all your memory clients need or can easily use high bandwidth then that's a win for the ring bus.

Intel may have a better use for going with the ring bus than AMD: cache coherency and inter-core communication. Partitioning the L2 and using the ring bus to maintain coherency and facilitate communication could make good use of this massive amount of data moving power. While Cell also allows for internal communication, Intel's solution of providing direct access to low latency, coherent L1 and L2 partitions while enabling massive bandwidth behind the L2 cache could result in a much faster and easier to program architecture when data sharing is required.