How Many Cores in a Larrabee?

Initial estimates put Larrabee at somewhere in the 16 to 32-core range, we figured 32-cores would be a sweetspot (not in the least because Intel's charts and graphs showed diminishing returns over 32 cores) but 24-cores would be more likely for an initial product. Intel however shared some data that made us question all of that. 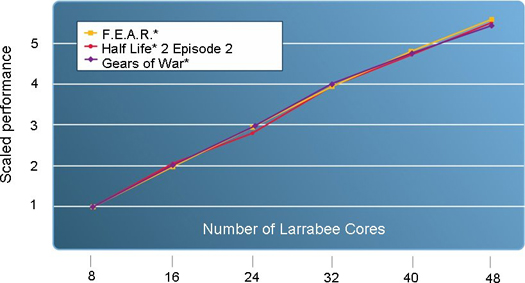 Remember the design experiment? Intel was able to fit a 10-core Larrabee into the space of a Core 2 Duo die. Given the specs of the Core 2 Duo Intel used (4MB L2 cache), it appears to be a 65nm Conroe/Merom based Core 2 Duo - with a 143 mm^2 die size.

The move to 45nm could scale as well as 50%, but chances are we'll see something closer to 60 - 70% of the die size simply by moving to 45nm (which is the node that Larrabee will be built on). Our 40-core Larrabee is now at ~370mm^2 on 45nm. If Intel wanted to push for a NVIDIA-like die size we could easily see a 64-core Larrabee at launch for the high end, with 24 or 32-core versions aiming at the mainstream. Update: One thing we did not consider here is power limitations. So while Intel may be able to produce a 64-core Larrabee with a GT200-like die-size, such a chip may exceed physical power limitations. It's far more likely that we'll see something in the 16 - 32 core range at 45nm due to power constraints rather than die size constraints.

This is all purely speculation but it's a discussion that was worth having publicly.