It’s announcement day! Well, not really. Intel made a few disclosures about its efforts in the embedded space, but nothing tremendous. It all starts with a little chip called Atom.

Oh, hai. You're bigger than I expected. You know, being called Atom and all.

Intel’s Atom processor is quite possibly Intel’s most important microarchitecture, yet it is hardly discussed - mostly because current implementations are hardly interesting. Today the Atom processor is little more than a very low power x86 chip that performs a lot like a 1.2GHz Pentium M, it’s not exactly setting any speed records.

We’ve already detailed the Atom architecture in depth here, to recap it’s a 2-issue, in-order architecture with SMT support. The goal for Atom has always been to be able to deliver the performance of a 4-year-old Pentium M, in a 1W power envelope. As we found in our initial performance investigation of Atom, Intel was able to sort of meet this goal. At 1.6GHz, the Atom performs somewhere between a 800MHz Pentium M and a 1.6GHz Pentium M - we roughly approximated that to be the performance of a 1.2GHz PM. 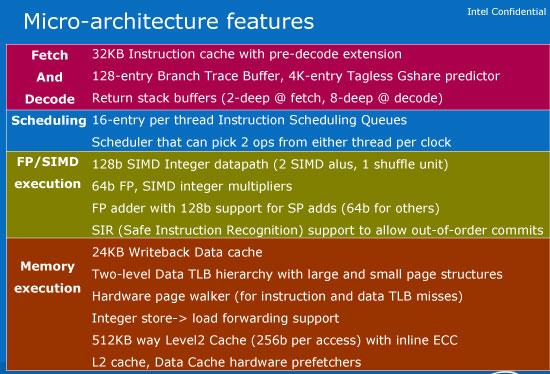 The problem is that at 1.6GHz, we’re at a 2W TDP. In order to drop below 1W we have to look at the 800MHz Atom Z500, which not only runs at half the clock speed but also lacks SMT support, which normally delivers a healthy performance increase on the in-order architecture.

So today Atom is hardly interesting beyond some niche markets. ASUS has embraced the chip for its Eee PC and Eee Box machines, but it’s either too slow for a real desktop, or too power hungry (and too large) for things like smartphones. You have to start somewhere though, and that’s what Atom is - a starting point. The next step is where things get more interesting...