Remember this chart from a couple of CPU reviews ago? 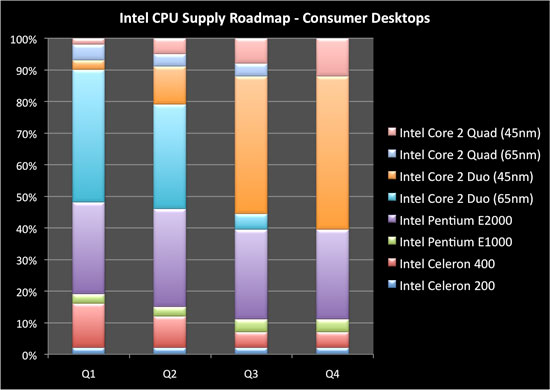 It helped explain why Intel's first Penryn microprocessors, based on its new 45nm process, cost so damn much. In short, the chart showed that in Q1 and for much of Q2, the demand for dual and quad core CPUs exceeded what Intel was able to supply in 45nm versions. However today is July 1st and we're now entering the third quarter, which is when we first predicted we'd see 45nm 1Ku and street prices collide. Have they?

The table above speaks for itself, while the ridiculously priced QX9770 will set you back $70 over what Intel's 1Ku pricing sheet indicates, the rest of the chips are priced very close to what their 65nm ancestors were priced at. At the lower end of the spectrum the Core 2 Duo E8200 remains an exception, costing over $180 instead of the $163 we'd expect to pay for it. I suspect that within the next month or two you'll see the E8200's pricing fall in line with expectations, just as the rest of the lineup has. The new $133 golden boy, Intel's Core 2 Duo E7200, is actually selling for $129 these days - making it the new value leader from the boys in blue.