The X4450 Up Close and Personal

When we look at the Sun Fire X4450, we find a few differences from the "reference" design. Six pairs of fans are easily accessible at the front of the server. If one fails, you just have to open the first part of the top cover door and replace the faulty fan. This is an advantage compared to other similar servers and the Intel S7000FC4UR for two reasons. The first reason is that all the fans are in one place - no searching is necessary. The second reason why Sun's approach is better is that if a rear fan fails on other servers, you will have to pull out the entire server to replace those fans in the back. You can imagine that this might be difficult if your server is located relatively high in a rack. Thumbs up for the Sun machine: it offers better serviceability. 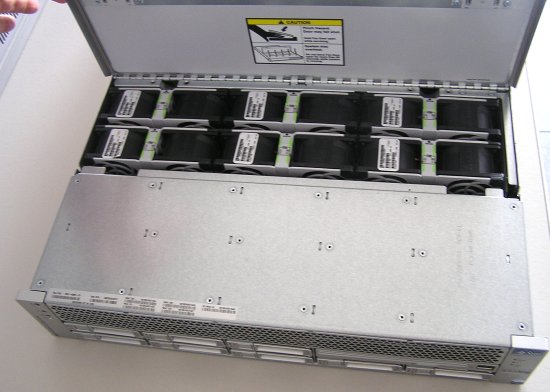 The top cover is split into two parts. If you remove the main cover (the part in the back), the system will automatically enter standby mode. Sun makes use of two 1050W PSUs, which could save power compared to the 1570W power supplies found in the Intel S7000FC4UR. (Efficiency and other factors will of course play a role.) 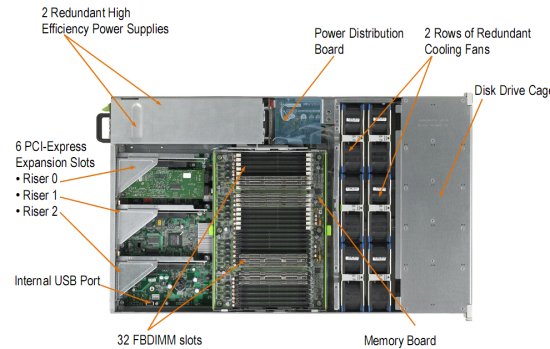 The most remarkable part of the X4450 design is that the engineers managed to put a memory board on top of the CPUs and the Northbridge heatsink. The complete memory basket is easy to remove and does not require any tools as you can see below. 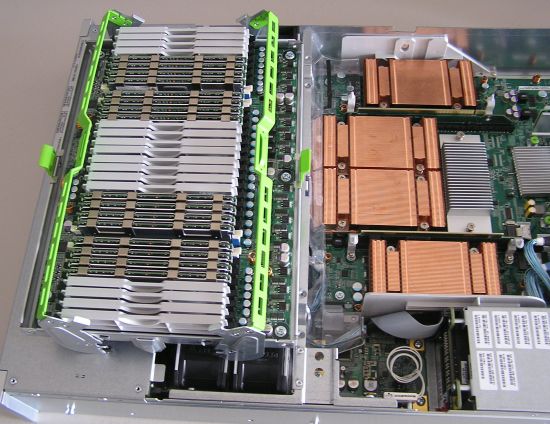 All servers claim to be ready for virtualization, but Sun and Dell have to have thought this through just a little better. Integrating four Gigabit Ethernet ports instead of two is a very smart move. For a typical ESX server you need:

In some virtualization scenarios, you'll use up to eight (!) gigabit ports:

We admit eight ports might be a bit luxurious, but frankly there is little you can do with only two Ethernet ports these days. 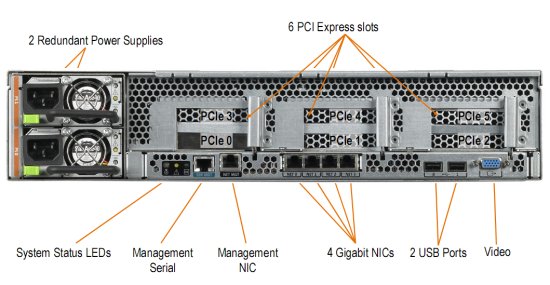 Three risers allow you to plug in six different PCIe cards, which should be more than enough upgrade space for most applications. Let's see how Sun compares to its competitors:


The HP server is the most expandable, but still forces almost every customer to buy an additional NIC. It's not a big deal, but it's still a small disadvantage. IBM is clearly counting on the fact that you'll use a SAN storage with this server. This is also only a small disadvantage as most users will combine this kind of server with a SAN. However, if you are looking for one big database server, the IBM will not fit the bill. Notice how the Sun Fire server has the PSU with the lowest spec, a first indicator of power consumption.