This guide's intent is to help those with limited overclocking experience or those unfamiliar with NVIDIA-based motherboards in learning the basics when it comes to overclocking DDR3 memory using the 790i MCP. All of these options can be directly accessed from the main BIOS setup page entitled "Extreme Tweaker" or from one of the four submenus listed below. 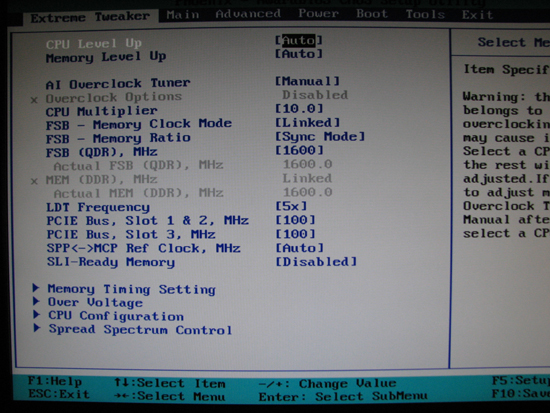 CPU Level Up - [Auto, Crazy] Selecting Auto, our recommended setting, allows for user adjustments of each individual CPU and memory overclock option (when available). If anything other than Auto is used the only overclocking option that can be manipulated is CPU Multiplier.

Crazy automatically sets AI Overclock Tuner to CPU Level Up, locks the FSB to the next higher tier based on the installed CPU's default value (333MHz goes to 400MHz, 400MHz is slightly increased to 433MHz etc.) and sets whatever DRAM:FSB ratio is needed to keep the memory running at DDR3-1333.

Auto locks the FSB frequency to the CPU's default value and sets DDR3-1333 for the memory speed. For most 45nm processors this means the memory then runs at a DRAM:FSB ratio of 2:1, standard practice for DDR3 motherboards. One exception to this rule would be the QX9770 working at a default FSB of 400MHz, in which case a 6:5 divider would be needed for DDR3-1333 memory operation. CPU Multiplier is the only other possible overclocking adjustment when using this option.

Standard is much like Auto in that the board automatically sets the FSB and memory speeds and only allows for CPU Multiplier manipulation. Essentially, these two settings performed the same during the course of our testing, implying that Standard, better known as stock, is in fact the default (automatic) setting.

AI Overclock enables Overclock Options, allowing the user to select one of four pre-defined overclocking "profiles", establishing a new FSB frequency. The memory and FSB memory speeds are linked and FSB - Memory Ratio (DRAM:FSB) can be adjusted along with CPU Multiplier.

The last option, CPU Level Up, functions differently based on the current value of FSB - Memory Clock Mode. If set to "Auto" or "Linked" then this option is almost exactly the same as choosing "Crazy" from CPU Level Up, except that the FSB is initially set to the installed CPU's default value. Setting FSB - Memory Clock Mode to "Unlinked" provides the ultimate freedom with respect CPU and memory overclocking - by effectively unlinking these two system clocks the FSB can be set independently from the memory frequency. Although the goal is that these two clocks remain completely autonomous in their operation, the chipset is not actually infinitely adjustable in this regard - it is entirely possible to find the actual memory speed set a little lower than the target speed, depending on the values selected for each.

Our experience has shown that instead of the relatively small number of "dividers" possible with Intel chipsets, NVIDIA's "unlinked" chipsets essentially provide 2^8 (256) dividers with some of the ratios at least achievable in theory sometimes falling outside of the range of possible memory speeds, depending on the FSB. This is usually enough to create the illusion of a fully unlinked FSB - Memory Ratio even though this is not really the case.

Overclock Options - [Disabled, Overclock 5%, Overclock 10%, Overclock 15%, Overclock 20%] This option is only available for adjustment when AI Overclock Tuner is set to "AI Overclock", otherwise it has no affect. The available settings - 5% to 20% overclock in 5% increments - refer to the target Front Side Bus (FSB) overclock, so CPUs with higher multipliers (as well as those with higher default FSB) will experience a more radical overclock than those with lower default values. For the most part, this is a poor overclocking strategy and we recommend you choose one of the more hands-on approaches if you are looking for real results.

CPU Multiplier - [6.0 to Default Multiplier, Fully Adjustable for Extreme CPUs] This value, when multiplied by the Front Side Bus (FSB), sets the CPU's core operating frequency. For instance, an 8x multiplier, combined with a 400MHz FSB frequency, results in a final CPU speed of 3.20GHz (8 x 400MHz = 3200Mhz).

However, being an "Extreme" CPU, the QX9770 is capable of essentially unbounded adjustment when it comes to the multiplier - trust us, you will run out of operating margin long before you begin to explore the upper limits of these processors' multipliers. This makes owning an Extreme CPU particularly pleasant, as there is never any limitation on which multipliers can be selected for use. This is often referred to as having a CPU with an "unlocked" multiplier.

FSB - Memory Clock Mode - [Auto, Unlinked, Linked] For the most part, Auto is synonymous with Linked, meaning the DRAM:FSB ratio must be one of just a few fixed ratios. Unlinked means the user has the option of dialing in just about any FSB and DRAM frequency independent of one another. Maximum performance is achieved using the Linked mode of operation, something we will discuss in more detail later on.