Prior to its Intel Developer Forum, Intel is revealing a bit more detail on some new products coming down the pipeline - including Nehalem and Larrabee. 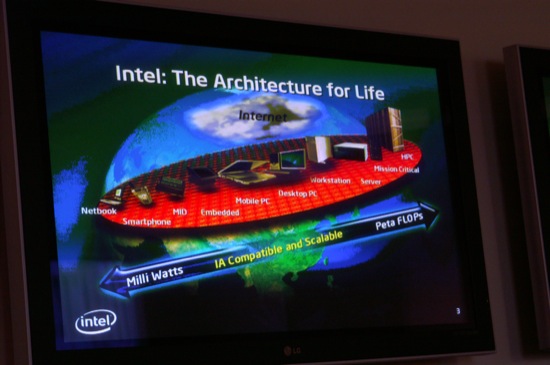 IDF is going to be all about scaling Intel Architecture from milli watts all the way up to Peta FLOPs. This is clearly a reference to the Intel Atom on the milli watts side and new high end quad-core Itanium and Larrabee products on the Peta FLOPs side. 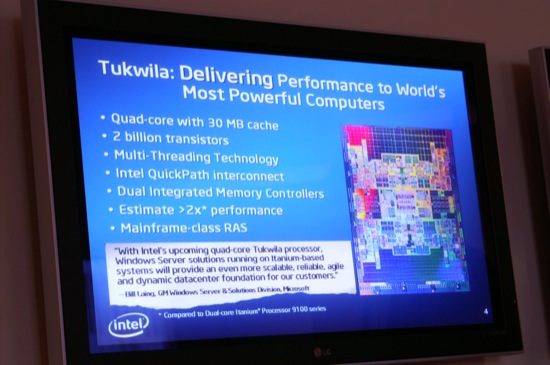 Tukwila is Intel's first chip with a full 2 billion transistors and should be shipping by the end of this year, with full systems available next year. Tukwila, like Nehalem, will support Intel's QuickPath Interconnect (QPI), a point-to-point interconnect similar to AMD's Hyper Transport. Also like Nehalem, Tukwila will feature an integrated memory controller - two in this case.

Next up was the Intel Dunnington processor, a 45nm 6-core Xeon part based on Penryn cores: 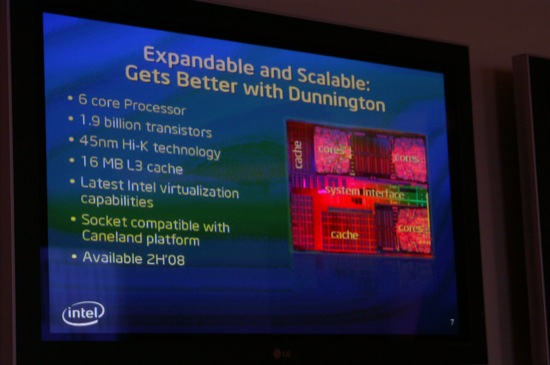 With 6 cores (3 dual-core pairs on a single die) and a massive 16MB shared L3 cache, Dunnington is close to Tukwila in transistor count, weighing in at a whopping 1.9 billion transistors. Dunnington is the first shipping product to come out of Intel's India Design Team based out of Bangalore, India.

Architecturally there's not much difference between Dunnington and current Penryn based Xeon parts, you simply get more cores and a very large L3 cache shared by all of the cores. Designing such a beast isn't an insignificant effort, but it's made easier because when Intel designs a core it designs everything up to but not including the L2 cache. The L2 and everything external to it is referred to as the "uncore" and is made somewhat modular, although not quite to the same degree as Nehalem.

Dunnington is the first step in Intel implementing a very Phenom-like cache architecture with its future Core products, culminating in Nehalem.