As the G9x series of GPUs slowly trickles into the mainstream, we are very happy to report that NVIDIA has executed a solid post 8800 GT launch: the G94 is very competitive at its price point in the form of the GeForce 9600 GT. That the current generation couldn't outpace the previous generation is a major complaint we had of previous midrange launches. Hopefully NVIDIA and AMD will be able to keep up the competition for all the new introductions we see this year.

The Radeon HD 3850 has been doing fairly well, and we are glad that, for a change, AMD has been able to put the pressure on NVIDIA. The 8800 GT has done a good job above $200, but now we'll be taking a look at what happens when the technology creeps below a threshold that makes it infinitely more attractive to the average gamer.

The GeForce 9600 GT, in addition to finally encroaching on ATI's naming scheme, is fabbed on a 65nm process by TSMC and sports a 256-bit memory bus. The differences between G9x and G8x are small, but even so details were light. Their compression technology has evolved to provide higher effective bandwidth between the GPU and framebuffer. We would love to provide more details on this and the other changes, but NVIDIA is still being a bit tight lipped.

The only other major difference is in PureVideo. The G92 and the G94 both support new PureVideo features that should enable a better, more flexible experience when video players roll out software support for these additions. The changes include performance improvements in some situations, as well as potential quality improvements in others. We have yet to test out these changes as none of the players currently support them, but we will certainly talk a little bit about what to expect. 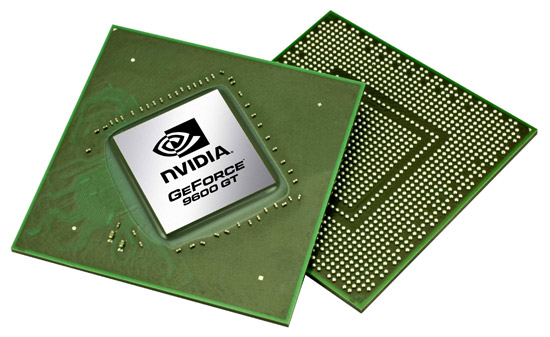 Here's a look at exactly what we get under the hood of a stock GeForce 9600 GT as compared to the rest of the NVIDIA lineup.

Dynamic Contrast Enhancement simply takes, on a frame by frame basis, the contrast histogram of a scene and stretches it out - resulting in artificially increased contrast. NVIDIA indicated that Dynamic Contrast Enhancement is most useful in scenes that have relatively high contrast already, as it is specifically programmed to ignore certain low contrast scenes to avoid completely corrupting the intention of a frame.

Automatic Green, Blue and Skin Tone Enhancements is a longer way of saying automatic color saturation adjustment. When enabled, this feature looks at midtones of most colors and simply boosts their values so that these colors appear brighter/more vibrant. The higher a color's initial starting value, the lower the amount it will be boosted by - in other words, this isn't a linear function. Because it's a non-linear function, you don't end up crushing the colors but instead you get a curve that tapers off giving you more vibrant, brighter colors overall. Like the Dynamic Contrast Enhancement feature, the Green/Blue and Skin Tone Enhancements are evaluated on a frame-by-frame basis.

Video purists will hate these features as they don't accurate reproduce the image that was originally recorded, instead you're getting the Best Buyification of your computer monitor: oversaturated colors and overboosted contrast galore. However it turns out that most users prefer oversaturated colors and overboosted contrast, which is why most TV makers ship their sets far from calibrated. Most PC monitors lack the sort of configuration options to achieve the same effect as an improperly, but appealingly calibrated TV. NVIDIA hopes that its PureVideo HD Enhancements will be able to bridge the gap between how things look on your PC monitor and how they look on your TV.

If you spend a lot of time properly calibrating your TV, chances are you won't want to use these features. Thankfully they can be disabled. However, if you do like similar functions on your TV, then you may just be pleased by what the 9600 GT has to offer.