An Unexpected Loss of Performance at Higher Speeds

Our testing provided us with many opportunities to explore the full limits of the QX9650. Along the way, we noticed some unexpected performance problems when overclocking above ~4.25GHz. It appeared as though the processor refused to maintain full load when forced into a period of sustained 100% CPU usage. Our first indication of a problem came when we observed rapidly fluctuating on-die core temperatures while running an instance of Prime95 on all four cores. Manually assigning the processor core affinities for each thread and the observing the system showed that throttling was occurring on Core 1.

Because traditional CPU frequencies detection tools showed no real-time change in operating frequency of any kind, we concluded that the core clocking signal was somehow subjected to a modulated duty cycle. This confused us though as what we were seeing did not fit with what we already knew about Core 2 thermal protection mechanisms. Although Intel processors do make use of a feature intended to lower processor power consumption should they get too hot, all the documentation we can get our hands on suggests that all cores will be affected, not just one. Besides that, core temperatures are well under control and nowhere near the QX9650's maximum allowable T-junction limit of 105°C. 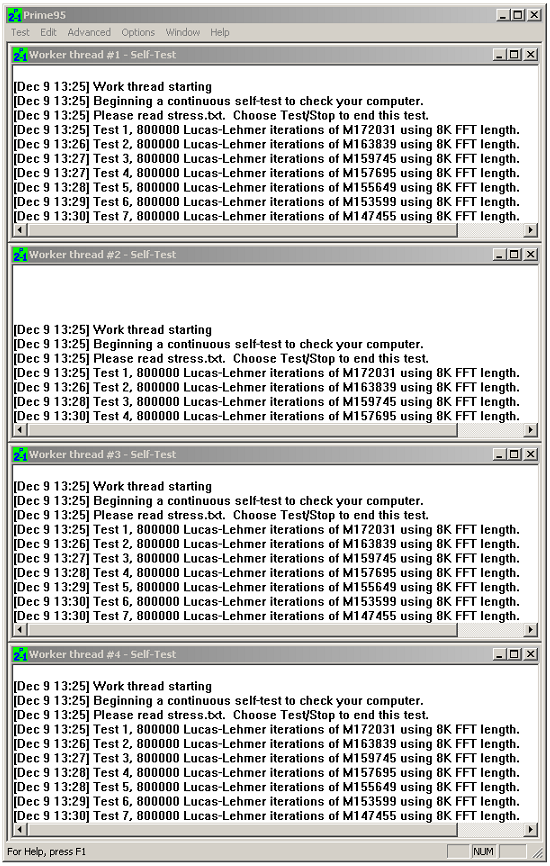 We first suspected our motherboard's VRM circuitry might have been overheating while supplying the high load current. If this were the case the PWM IC would communicate with the processor using the PROCHOT pad and the CPU would respond by modulating an internal clocking signal to each core thereby artificially lowering the load and allowing the VRM to cool - a failsafe meant to save the VRM should things start to get too hot. Eventually our frustration in the matter led us to modify our board by disconnecting the control signal altogether. Unfortunately, there was no change.

We discussed the possibility of having discovered an undocumented erratum, thinking that maybe some internal control logic was at fault. The Analog Devices ADP3228 PWM controller used on the ASUS P5E3 motherboard, designed in compliance with Intel's new VRM 11.1 specification, includes a new power management feature intended to improve power circuit efficiency during periods of light loading. When directed by the CPU the VRM essentially disables four of the eight power delivery phases until they are later command back on. (This is not unlike the concept put to use in the automobile industry wherein half an internal combustion engine shuts down while cruising in order to improve fuel economy.) However, we are unable to completely rule out a possible incompatibility as no one is aware of how to go about disabling this feature.

In fact, we believe what we are seeing may be nothing more than a CPU protection mechanism in action. The Core 2 family of processors is extremely resilient to abuse - reports of failures due to overvoltage or over current incidents are exceedingly rare. Features such as these work by clamping processor input voltage (and current) to tolerable levels in order to prevent permanent damage. Further testing reveals we have some level of control with regards to the "throttling" - it seems that by slightly lowering the VID, and thus in turn the CPU supply voltage, we are able to complete testing at some of the same frequencies with no noticeable performance degradation issues. Could it be possible that we found a processor protection limit with nothing more than common water-cooling? Normally, such discoveries are the domain of those that freeze their CPUs with one or more rotary compressors or copious amounts of liquid nitrogen. Given the enormous power increases observed at these higher speeds due to what might be a processor capacitance effect, we cannot help but wonder if these new limitations are an unintended consequence of Intel's 45nm process.

If what we believe is true the implications could be enormous. The need for certain industries built on delivering high-performance cooling solutions to the overclocking community would be largely invalidated. What's the point in spending more money on a more effective heatsink if there's nothing to gain? With that said, we honestly believe a new direction in CPU overclocking may soon be upon us. While there will always be those that continue to push processors to their absolute limits, the majority of us will find our new "performance" benchmark in efficiency. This makes sense though - the market has been heading this way for years now and overclockers may have simply chosen to ignore the obvious. The multi-core era we now live in places a heavy emphasis on performance-per-watt figures and other measurable efficiencies. Does anyone else find it odd that Intel's flagship product, the QX9650, comes at exactly the same speed bin as the previous 65nm offering? All this talk of improved performance and efficiency and not even a measly frequency bump - perhaps Intel is trying to tell us something.