Everything You Need to Know: Yorkfield vs. Kentsfield

The big question is: how does Yorkfield stack up to Kentsfield, the current 65nm quad-core part from Intel? Thankfully, the QX9650 runs at the same clock speed/FSB as the Kentsfield-based QX6850 making our job a little easier. We put these two bad boys up against one another and waited for the smoke to clear. 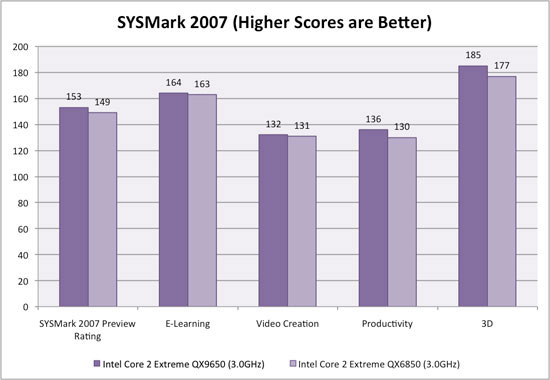 As we saw in our initial Penryn preview, the general application suite tests just don't show any real improvements of Penryn over Conroe. SYSMark 2007's overall performance went up by 2.6% but that's far from significant. If you look at the individual tests however, you'll see that the 3D benchmarks went up by 4.5% and the productivity suite went up by a similar 4.6% margin. The improvements in the 3D suite are expected, given the Radix-16 and Super Shuffle Engine enhancements to the Penryn core. The productivity suite most likely benefits from the Radix-16 divider as well as the larger cache. Overall the performance boost just isn't that significant, but given that Penryn is expected to arrive without a price premium, any performance improvement is better than nothing. 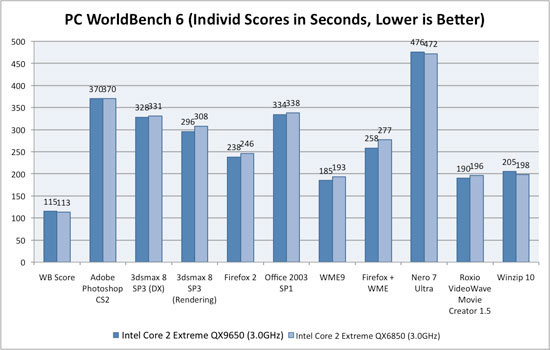 We see the same situation under PC WorldBench 6: the overall performance boost of Penryn over Conroe is basically nil. Digging deeper we see performance increases on the order of 4 - 7% if we look at the individual 3D rendering or media encoding tests.

Next up we've got our encoding tests, and given what we've already seen, we should expect some nice gains here: 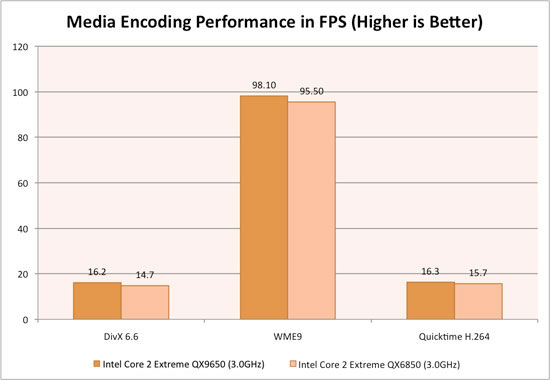 And nice gains we do get. The clock-for-clock improvement under DivX 6.6 is a nice and round 10%, although curiously enough we get a meager 3% from our Windows Media Encoder test. Our QuickTime H.264 test shows a more average 4% performance increase, similar to our WME test.

Professional 3D rendering and image manipulation are also areas where we expect to see reasonably high gains from Penryn. Our 3dsmax, Cinebench and Lightwave tests remain unchanged from previous articles. The CS3 benchmark is the same Retouch Artists test we've used in previous CPU reviews. In order to avoid having a graph scale that ranged from zero to the thousands we simply included percentage improvements here rather than actual numbers (e.g. 3dsmax scores are single digits while Cinebench scores are 4 digits): 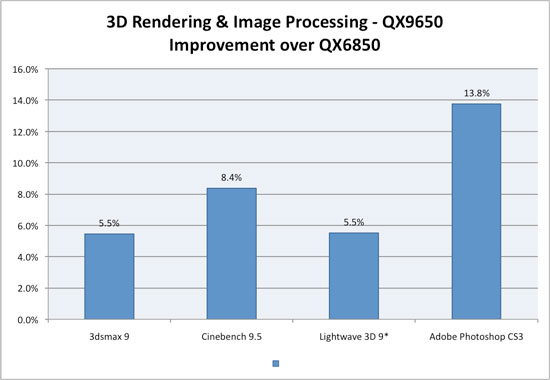 As expected, we're seeing reasonable gains here. 3dsmax shows a 5% increase, Cinebench 8%, Lightwave 6% and Photoshop CS3 has a healthy 10% performance boost in store for us. Without a doubt encoding and 3D/image manipulation are the real strengths of Intel's Penryn architecture.

The final Penryn test is all about 3D gaming and thankfully we have a number of new titles to play with. All of our benchmarks were run at 1024 x 768 to avoid being GPU bound and with high quality settings (the exceptions being Crysis and World in Conflict which both used Medium quality defaults). 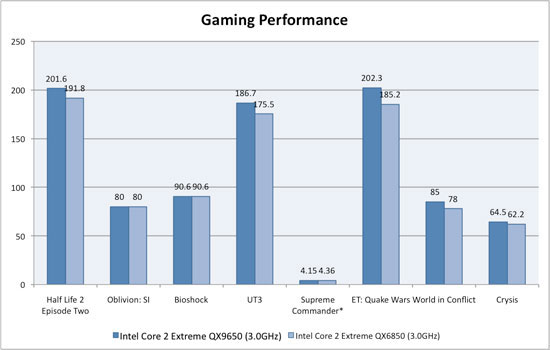 Penryn's gaming performance is really all over the place. Titles like Oblivion and Bioshock see absolutely no performance increase, while Crysis gives us a mild 3.7% performance boost. Half-Life 2: Episode Two and Unreal Tournament 3 enjoy a 5.1% and 6.4% increase respectively, while World in Conflict and Quake Wars are both at around 9%.

If anything the gamut of gaming benchmarks sums up Penryn's performance improvement over Conroe quite well: it really varies from nothing to something.