Our typical expectations were to see the standard orange or yellow LANParty color scheme, change is in the air and lime green is the flavor of the month. No matter the color scheme, the general layout of this board is nearly flawless. 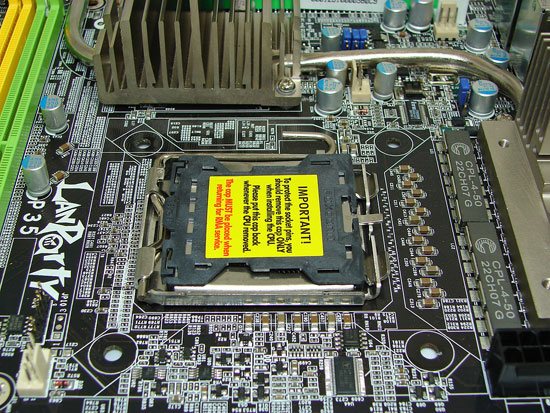 A clean CPU socket area ensures compatibility with large air-coolers. We do recommend that users consider having enough space for an additional fan to provide airflow over the PWM and Northbridge heatsink, if they intend to use more than 1.6V on the Northbridge. The 8-pin power connector sits at the top left corner of the board, close to the PWM circuitry, with enough room to allow the use of bulkier connectors without any interference from surrounding components.

A more noteworthy subject is the 8-phase Digital PWM circuit, using the Volterra VT1115MF buck controller and associated fast-switching, high-bandwidth "Digital" MOSFETs. This solution has received mixed responses from overclockers, some feeling that Digital PWM does not have sufficient durability for an extreme overclocking motherboard. The current 8-phase design has managed to run overclocked quad-core CPUs completely Prime load stable at speeds of up to 4GHz. However, the jury is still out as to the effectiveness of the current Digital PWM design when quad-core CPUs are super-cooled. In the past, VCore settings over 1.6V and CPU speeds over 4GHz have not fared too well on lesser 6-phase implementations of DPWM, especially in high CPU load benchmarks. 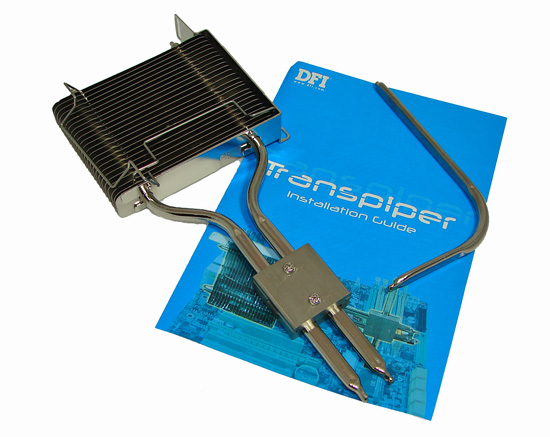 DFI utilizes a heat pipe system that connects the PWM, P35, and ICH9R together to provide a cooling solution that works quite well, until you really push the board. At that point, additional cooling from active air or water solutions is required to properly cool these critical components. DFI engineered an extension joint (Transpiper) that attaches to the ICH9R heatsink to help carry heat within this system out of the chassis. There are numerous mounting configurations, with the most logical being to connect the highest heat producing area (the PWM heatsink) and have the Transpiper assembly exiting the PC case, so that heat is removed from the case, in theory reducing all internal component temperatures.

This system typically worked well with an air-cooling setup on the CPU and pushing the board to its limits on air. However, we did not notice any benefits during heavy overclocking sessions with water or cascade cooling. In fact, the hot air exiting the test case from our OCZ 1000W or 1200W power supplies seemed to have a reverse effect during extended overclocking sessions with the Transpiper located in front of the PSU fan as recommended by DFI. As such, DFI offers a version of this board without the Transpiper option for these users, or ones who want to save about $20.

That's not all; there is also a heat transfer plate that can connect from the CPU IHS to the PWM heatsink, sandwiched between the IHS and user CPU cooling solution. Our own thoughts are that users are best advised not to use this plate, as the temperature of both the PWM and CPU seem to suffer as a result. A closer look at the PWM heatsink mounting holes for this transfer plate shows that the width between the two holes is only a quarter of an inch offset from the mounting dimensions of the already available MIPS DFI 680i LT MOSFET waterblock (the key phrase here is "already available"). Had the holes on the PWM heatsink aligned with the MIPS 680i LT block without requiring a redesign ,or the removal of DFI's own PWM heatsink for functionality, current owners of the block and perspective water-cooling users could have been saved some time and perhaps money. 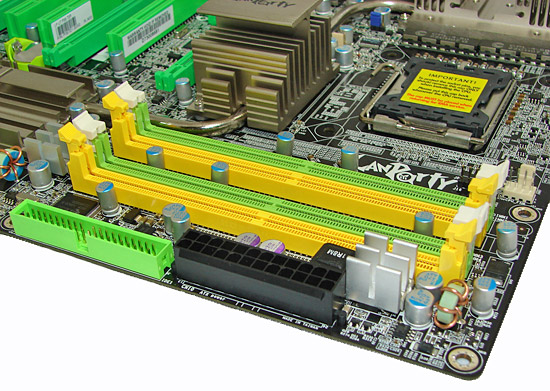 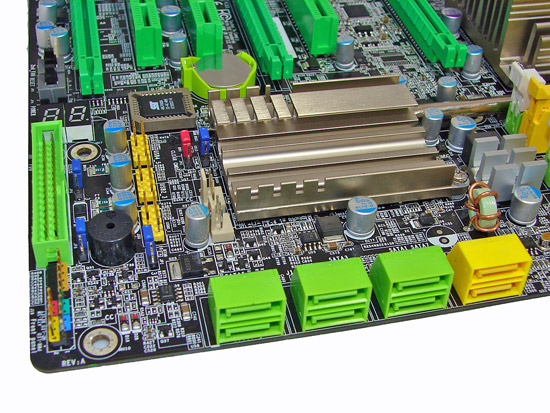 DFI once again adhered to their typically overclocking friendly layout, easily accessible CMOS battery, onboard power and reset switches featuring EZ CMOS clear, and of course the LED POST Code display. The floppy drive connector sits at the lower edge of the board to the right of the POST Code display. The six Intel ICH9R SATA ports are located at the lower right edge of the board, facing to the right making connector insertion a little awkward at times once the board is mounted in a case. There are also two JMicron JMB363 SATA ports situated above the Intel SATA ports.

The memory slot connectors are situated almost in line with the primary PCI Express connector; large graphics cards such as the 8800 GTX may have to be removed when swapping out memory modules. The 24-pin ATX connector is placed to the right of the slots and does not hinder the use of the IDE connector below it. There are six onboard fan headers, all logically placed in high heat production areas, with both BIOS and OS Smart Guardian fan control options. 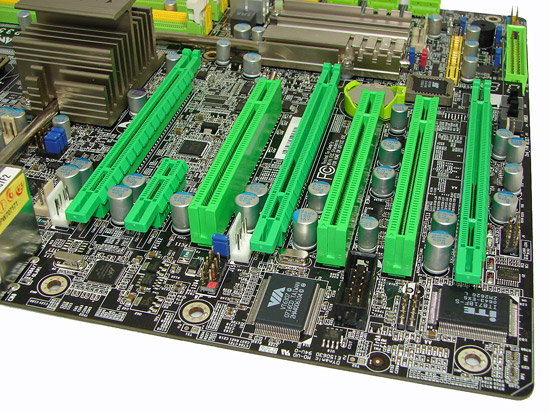 The expansion slot layout is comprised of three PCI Express x16 slots (one x16, one x4, and one x1 slot), one PCI Express x1 slot, and three PCI slots. The supplied Bernstein Audio module features the Realtek ALC885 8-channel High Definition Audio CODEC and has its dedicated connector placed between the PCI slots, rendering one of the PCI slots inactive if the module is used. There are three onboard USB connectors for an additional six USB ports, a connector for an external COM port, one IrDA connector, one CIR connector, and a connector for the second IEEE-1394 port. 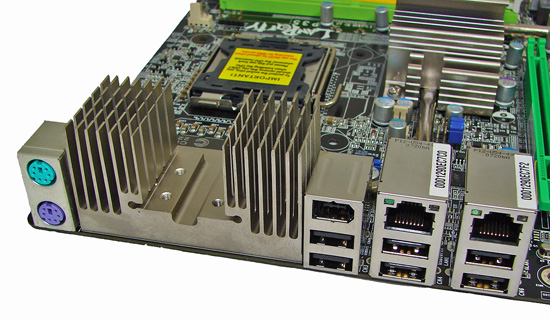