The last three months have seen the overclocking enthusiast sector bombarded with motherboards based around the Intel Bearlake (P35) chipset. While it has become an expectation for many to see boards from the main players up front and ready to go at product launch, early adopters have naturally expected DFI to be fashionably late to the ball with their own LANParty series offering. In terms of business, the enthusiast sector is an area of the retail market where being late does not earn the "money shot"; vital sales are lost in delays, no matter how good the product is - the delay is costly. So costly that many of the leading players in the once hot AMD S939 sector such as DFI, abit, MSI, Albatron, Chaintech, Shuttle, and EPoX have seen their market shares dwindle (sometimes drastically to the point of not being around anymore) since the introduction of the Core 2 Duo from Intel and the resulting market switch by the enthusiasts to the blue camp.

This time around DFI managed a reduced delay period of two months behind the official Intel Bearlake chipset rollout, greeted by applause from most tweakers who have been awaiting a killer product from the company since the "glorious" NF4 era. We thought the RD600 would fill that role last year, but it came up short in performance even though the BIOS options foretold the future about DFI's BIOS designs on Intel product. DFI managed to hit a home run with the Infinity 965-S Dark. Unfortunately, everyone had left the P965 ballpark to watch the P35 play in a new stadium by that time. Hopefully, their X38 product will be released in the coming weeks but until then (probably afterwards also based on early numbers), we think most people will be more than satisfied with the UT P35-T2R - provided you can afford it and do not have a need for multi-GPU benchmarking. 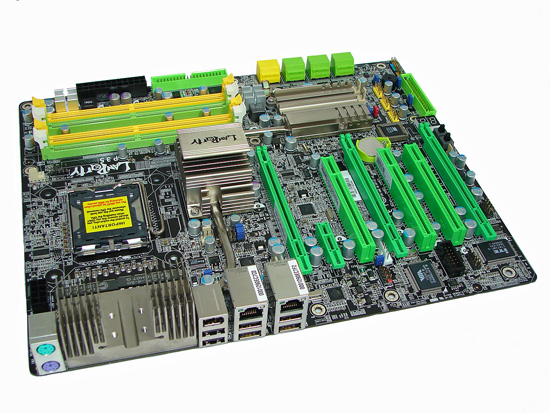 Beyond color enhancing UV lights to show off the board, the enthusiast knows that beauty in electronics, as with all other things, can often lie only skin deep. Rigorous in-house testing by DFI to iron out BIOS kinks was chosen over sending out boards at the chipset launch. This was done in an attempt to nail issues before users spent their hard earned dollars for partial functionality. As a matter of fact, anyone who buys motherboards close to official chipset launch dates should be fully versed in the ritual BIOS flashing regimen often required for long-term usefulness. Running a few quick benchmarks featuring high front side bus speeds might grab some early headlines, but it does not indicate a board's actual performance capability or stability. Put in perspective for the end-user, the two month delay is not such a bad thing, if a more solid and compatible motherboard is the end result.

Due to the very extensive BIOS options on this motherboard, assessing a product like this demands extra time. It also forces you to go over the options with greater detail while explaining their use and determining the worth of performance benefits when changing these options. While we are certainly not BIOS engineers, we are hoping that the time we have taken to go beyond the scope of normal motherboard review criteria will be welcomed by our readers, who are often just as confused as we are when we first take a look at a new DFI BIOS.

The goal then of this article is to take a focused look at how to properly set up and overclock this latest DFI offering, and even if you're not specifically planning on purchasing this motherboard we hope to provide some insight into what is involved in reaching top overclocks with Intel's impressive P35 chipset. In the near future, we will be able to provide direct overclocking performance comparisons and capabilities of this board against additional motherboards in the upper-end market sector. In the meantime, our results today are more of a dog and pony show as to what the board is capable of under various overclocking scenarios.

Additionally, we will be providing a catalog of "How to Guides" that will outline the BIOS settings utilized, BIOS option explanations, and recommended setups in our motherboard forum as we roll out these articles in the coming weeks. We welcome your input, suggestions, and ideas for improving this type of content. For now, let's take a look at DFI's latest board and its general performance results before we hit on the overclocking features.