As usual, gaming performance was tested with a variety of current games. We ran benchmarks at a 1024x768 resolution. Much more than this resulted in completely unplayable game conditions although we did find several older non-FPS games such as the Civilization series, Railroad Tycoon 3, Rollercoaster Tycoon series, and others played acceptability up to 1280x1024 with the quality settings at normal or lower.

This benchmark is performed using DICE's built-in demo playback functionality with additional capture capabilities designed in house. During the benchmark, the camera switches between players and vehicles in order to capture the most action possible. There is a significant amount of smoke, explosions, and vehicle usage as this a very GPU intensive Battlefield 2 benchmark. We run Battlefield 2 using medium quality graphics settings available in the video settings. The game itself is best experienced with average in-game frame rates of 35 and up. 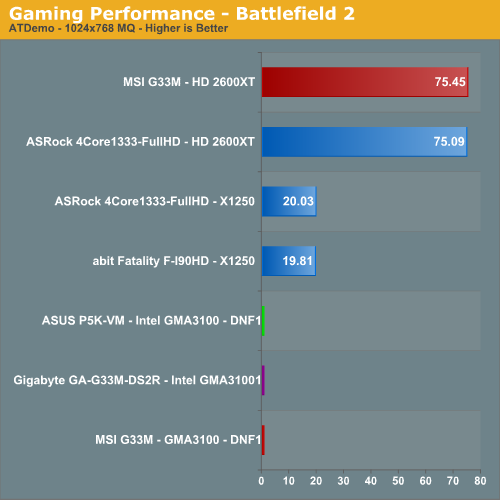 Half Life 2: Episode One

We use the built-in timedemo feature to benchmark the game. Our timedemo consists of starting at the bottom of the hill near the lake and ending in the old church. The Source engine timedemo feature is similar to the nettimedemo of Id's Doom 3 engine, in that it plays back more than just the graphics. The visual quality settings were set to high or medium where possible with HDR off. While the Source engine is notorious for giving great frame rates for almost any hardware setup, we find the game isn't as enjoyable if it isn't running at 30fps or above. 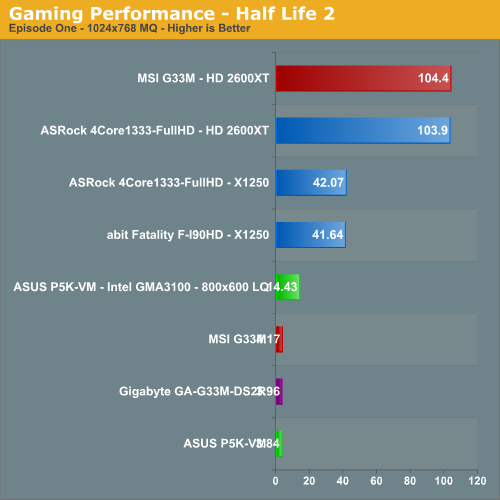 Company of Heroes is a GPU intensive game but still requires a well performing CPU at times. The game contains a built-in performance test that utilizes the game engine to generate several different action scenes. We found the performance test gives a good indication of how well your system will perform throughout the game on average. Some of the in-game action sequences are more demanding than the performance test, but we generally found the game to be enjoyable with an average performance test frame rate above 25fps. We set our quality settings to medium or low where applicable except for the first two are set to high and the sliders are set in the middle spot. 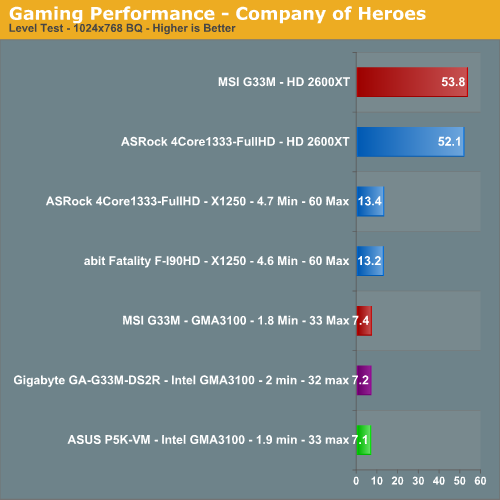 Sims 2 was released over two years ago and is constantly being updated with best selling expansion packs. In testing with the various expansion packs we did not notice any measurable differences in performance so our benchmark will be reflective of game play with the using the base game title. This particular game requires a decent CPU and very good GPU when utilizing the antialiasing, shadow, or high quality texture options.

We once again utilize FRAPS to capture the results from our replay file. Our benchmark consists of a three character scenario that takes approximately twenty minutes to setup and cycle through a series of daily events. The camera movements are varied as is the movement so we feel like this benchmark represents the typical game. We set most video options to high but disables shadows. We generally found the game to be enjoyable with an average frame rate above 30fps. 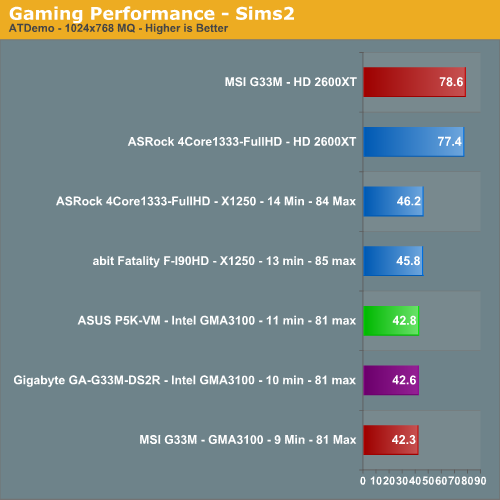 Supreme Commander is one of the favorite real time strategy games around the office as it continues to provide a great deal of replay value and the graphics are very good once the eye candy is turned on, but that will not happen today. What we especially like about the game is the fact that it can bring the best system to its knees and that fact makes it a great system benchmark. This particular game requires both a very good CPU and GPU when playing the game at anything above 1024x768 with decent settings. We utilize the game's built-in benchmark and generally find the game to be enjoyable with an average frame rate above 25fps. 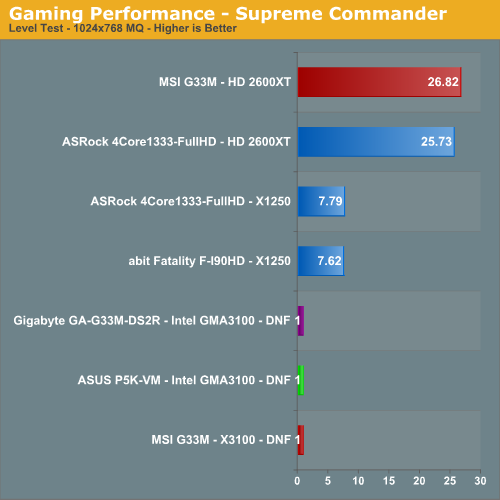 The G33 was incapable of running Battlefield 2 and Supreme Commander. Offline testing with Quake 4 and Prey resulted in an interesting slide show that allowed us to see every detail of the benchmark session in a slow, excruciating fashion. Frankly, a visit to the dentist for a root canal almost seems like a better use of time. Not all modern games completely failed to run, however.

G33 was able to generate results (for this grouping) in Company of Heroes and Sims 2. Image quality generally favors the X1250 in most games we tested. The G33 had acceptable image quality but at times we could tell certain details were not as sharp or even evident when compared to the X1250 boards. While most people will not be buying these boards for gaming purposes without an external GPU solution, we did find that reducing the resolutions to 800x600 and slightly increasing the quality settings did result in a passable experience on a temporary basis in games the chipsets would run.

The graphics capabilities of these chipsets in gaming are best left for older RTS type games or DirectX 8 based FPS/RPG titles. Most kid oriented games should also run, provided they don't explicitly check for an NVIDIA or ATI GPU.