by Gary Key on September 27, 2007 3:00 AM EST
26 Comments | Add A Comment
26 Comments
Intel is the largest provider of graphic solutions in the PC market. Repeat that three times, and then marvel at how that can be after trying to play the latest game you or your child just brought home. Or if you're trying to play that new HD-DVD or Blu-ray title that just arrived in the mail on your Intel Integrated Graphics equipped system.

Of course, Intel is the market leader by volume rather than performance. They ship more integrated graphics chipsets than anyone else in the world. Virtually every business PC sold uses an Intel IGP, along with many of the entry level home systems where the thought of playing the latest game or watching a high definition movie on a PC is but a mere twinkle in the eye of the user. After all, there are lot more important reasons for using a PC other than for entertainment and in these markets, the Intel graphics solutions are more than sufficient.

We tend to be in with the crowd that wants more than the basic features needed for getting Windows Vista Aero certification or running Office 2007 at lightning fast speeds. While we would always buy a dedicated GPU unit for gaming, we still expect enough performance out of an IGP solution to at least play the top edutainment titles or mass market favorites like Sims 2. We also expect an IGP to provide decent video acceleration of the latest video formats when Aunt Harriet wants to view the newest sensation on YouTube or watch a home movie from last Christmas. Finally, we have been known to use HTPC boxes, and the thought of spending more for a HD decode/playback capable video card than the motherboard, CPU, and potentially memory combined is silly for such a system.

The innovation in the IGP market has been lagging for some time but has picked up in recent months with the introduction of the AMD 690G, AMD Radeon X1250, and now the NVIDIA MCP73 series. All of these solutions offer native DVI/HDMI output, HD decode and playback features, and decent enough gaming performance for those just starting or in a pinch until they can afford a better solution. Intel made some headway with the G965 chipset, and they hope to keep pace with or even surpass their competitors with the upcoming G35 chipset. Until then, we are left with a mid-year release known as the G33, aka the GMA 3100. 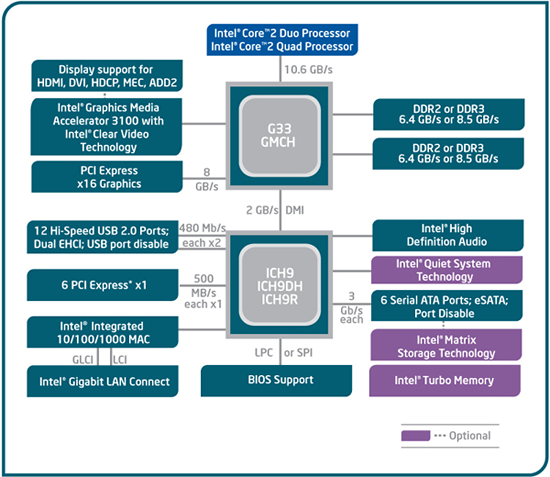 The G33 chipset is basically the P35 chipset with an integrated GMA 3100 graphics engine. As such, the chipset brings support for the 1333MHz FSB CPUs, upcoming 45nm based CPUs, and potentially DDR3. The GMA 3100 graphics engine is basically an update to the GMA 950 found in the 945G chipsets. The main highlights of the GMA 3100 are that it supports OpenGL 1.4, Shader 2.0 operations (DirectX 9.0c compliant), and Vertex Shader 2.0 is supported by software via CPU host processing. It has a 400 MHz clock, four pixel pipelines, a maximum 2048x1536 resolution, Dynamic Video Memory Technology, Clear Video processing engine, and MPEG-2 hardware decode acceleration.

Of these features, Dynamic Video Memory Technology is new and adds a twist to the UMA operations. DVMT allows the GMA 3100 to utilize anywhere from 4MB to 256MB of system memory for graphics purposes depending upon the type of application running. In 2D operation the chipset will reserve 4MB of system memory at 800x600 resolution and up to 16MB for 2048x1536 while dynamically adjusting the system memory requirements when utilizing a 3D application. HDMI, DVI, and HDCP support are provided... but only if the board manufacturer utilizes an SDVO chipset for the interface to the GMA 3100 or a separate ADD2 card is purchased. Otherwise, the user is left with the standard analog VGA output that our G33 review boards utilize today.

Even though the G33 is a "new" chipset, it still contains minimum graphics functionality and seems intent on just getting by in the market. Of course, it is not all about gaming with these platforms, but even in video playback and general application performance we see better solutions from Intel's competitors. Hopefully, this will change with the upcoming G35 chipset, but until that product actually ships we are left wanting.

Let's take a look at the G33 solutions today and see how well each board performs.