The Big Typhoon VX was outstanding at stock idle and above average among top coolers at stock load. However, as overclocks were raised, the VX was not particularly outstanding in the ability to cool the CPU under stress conditions. To be as fair as possible all overclocking tests were run with the Big Typhoon VX fan at the highest speed. 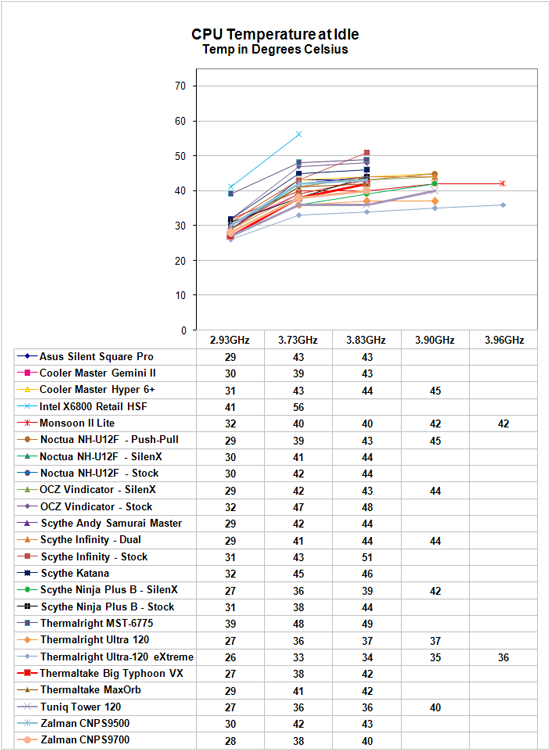 At 2.93GHz the retail HSF is running at 41C, compared to 27C with the VX. This is a delta of 14C. The delta becomes greater as the overclock increases. At 3.73GHz the idle with the retail fan is 56C compared to the VX at 38C - a delta of 18C. The cooling performance of the Big Typhoon VX is much better than the Intel retail cooler at idle, but the VX does not reach the same cooling levels measured with the Thermalright coolers (with a Scythe S-Flex SFF21F fan) or the stock Tuniq 120. The top Thermalright Ultra-120 eXtreme, for example, is at 33C at the same 3.73GHz, and it is still cooler than the VX at any speed measuring just 36C at the much higher overclock of 3.94GHz.

Cooling efficiency of the Thermalright Big Typhoon VX was also compared under load conditions to the retail HSF and other recently tested CPU coolers. Load testing can be very revealing of a cooler's efficiency. A basically flat line, particularly form 3.73GHz upward, indicates the cooler is still in its best cooling range. A line that is increasing rapidly indicates a cooler nearing the end of its ability to cool efficiently. Lines which parallel the best coolers over a range of values are showing similar efficiency slopes. 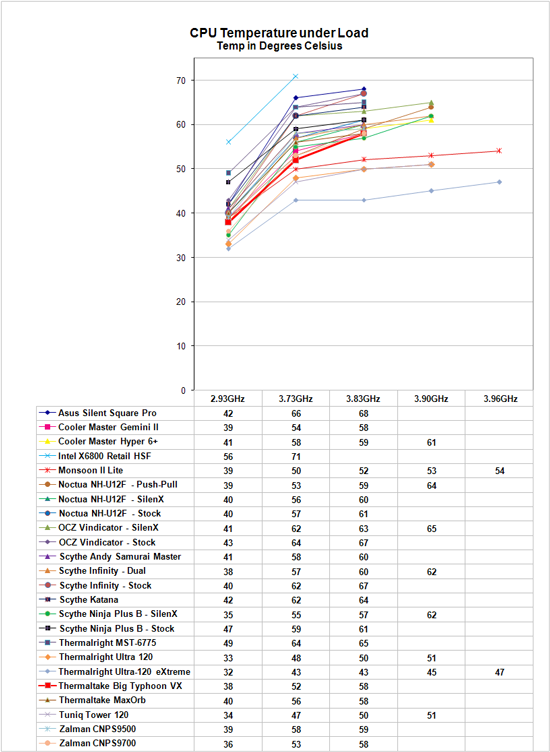 The VX is very efficient in cooling in the 2.93 GHz to 3.73 GHz overclock range. As you can see in the chart the slope of the line is similar to that of other top coolers in this range. The VX continues on to a highest overclock of 3.85GHz, which is well short of the 3.90GHz to 3.94GHz most of the top coolers in our testing have achieved. Compared with the top coolers, which have flat lines in this range, the slope of the VX in this range is steeper, indicating it is nearing the end of its area of efficient cooling.

As stated many times, the overclocking abilities of the CPU will vary at the top, depending on the CPU. This particular CPU does higher FSB speeds than any X6800 we have tested, but the 3.9GHz top speed with the Tuniq is pretty average among the X6800 processors we have tested with Tuniq cooling. A few of the other processors tested with the best air coolers reach just over 4 GHz, but the range has been 3.8 to 4.0GHz. Stock cooling generally tops out 200 to 400 MHz lower, depending on the CPU, on the processors tested in our lab.