by Wesley Fink on June 7, 2007 5:10 AM EST
34 Comments | Add A Comment
34 Comments
In our recent review of the Thermaltake MaxOrb and the Scythe Andy Samurai Master we evaluated whether the traditional down-facing fan coolers delivered the better performance and cooler computer systems their ads promise. Unfortunately, while both coolers performed better than the stock Intel cooler, neither came even close to cooling as well as the heatpipe towers with side-mounted fans that have topped our cooler performance tests in recent months.

Both also fell short in the overclocking parameter, as neither cooler could reach higher than 3.83GHz when our top air coolers were reaching 3.90 to 3.94GHz on the same CPU. We concluded that the down-facing fan designs really did not perform as promised - at least compared to the side-fan heatpipe towers cooling a Core 2 Duo processor.

Many readers requested that we test the Thermaltake Big Typhoon VX, a down-facing fan cooler with six heatpipes that has been around for a while and earned an excellent performance reputation. We really had not planned a Big Typhoon VX review since we did review the Thermaltake MaxOrb, but we are always as curious as you are whether something performs as promised. So we asked our friends at Frozen CPU for a retail Big Typhoon VX and pushed through our full suite of cooler tests.

The Big Typhoon uses a multi-speed cooling fan that is very similar to the MaxOrb just tested. This should not come as a surprise since both coolers are manufactured by Thermaltake. The specified speed range, noise, and fan output range of the VX are very similar to the embedded fan on the MaxOrb. Both have a fan speed control right on the cooler, and both also have six 6mm copper heatpipes for cooling. 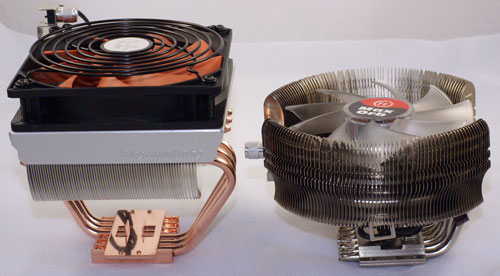 The biggest difference between the MaxOrb and Big Typhoon VX is in size and weight. As you can see in the comparison photo the VX is massive beside the MaxOrb. What you cannot see is the large weight difference, with the Big Typhoon VX tipping the scale at 827g (2 pounds) compared to the almost svelte 465g of the MaxOrb. While design components are similar, the MaxOrb is about half the weight.

The question that comes to mind is whether the larger size and greater mass will contribute to improved performance of the Big Typhoon VX? With more metal and longer heatpipes is heat better dissipated by the VX? We had also seen another roundup that placed the Big Typhoon VX at the top of the performance heap - well in front of our top-performing Thermalright Ultra-120 and Ultra-120 eXtreme. Of course that roundup did not test with the Core 2 Duo, which is the logical choice of today's overclockers. Perhaps more significant, the 86.5CFM Big Typhoon VX fan was compared to a Thermalright Ultra-120 mounting a low output (30CFM or 47CFM depending on setup) Silent fan. We were left to wonder whether more than double the airflow might have been the main contributor to the Big Typhoon victory over coolers we had found to be very capable.

Our goal was to put to rest all of these questions. Using the same test bed used for our ongoing cooler tests we set out to determine whether or not the Big Typhoon VX was really the better cooler on Core 2 Duo.