by Gary Key on November 9, 2006 8:00 PM EST
23 Comments | Add A Comment
23 Comments + Add A
Comment
At various times we will see some interesting products come through the labs and wonder why no one had thought of a certain idea before now. After spending a great amount of time with fifteen different P965 boards we were on the lookout for something what would really set one board apart from the others. We wondered if this would be possible as all of the motherboards offered the same chipset combinations and the manufacturers have the same peripheral options at their disposal. Considering the consolidation in the motherboard manufacturing sector it was going to be surprising to us if any of the boards did not follow a standard cookie cutter layout and feature list based on market segments.

It seemed to us the cookie cutter approach is exactly what happened as each series of boards fell into certain price segments with each offering almost the same feature list as you moved into ever higher price ranges. The true P965 budget boards all feature the same list of components and all overclock mildly with the only differences being in layout design - and even that is minimal at best. The mid-range sector we recently reviewed all performed nearly identically and offered the same basic features with prices being within a few dollars of each other. The high end sector boards all offer CrossFire support, unique cooling solutions, and additional features such as WiFi support or increased SATA ports. While they may appear to be different on the surface due to color schemes or minor layout changes, most offerings are basically the same except for the name on the box.

Sure we had Universal Abit trying to differentiate their product with the unusual layout design on the AB9-Pro along with a pink BIOS color scheme. While we give them full credit for at least trying to stand out from the crowd we think they ended up being out in left field with a board layout that made absolutely no ergonomic sense at all. There were other minor infractions from all of the suppliers in trying to be different but none of this usually matters if the board's performance and quality are up to standards. While we desperately wanted to see something truly interesting in our collection of boards we resigned ourselves to the fact this probably would not happen given the mass market sales and pricing targets of our test group. 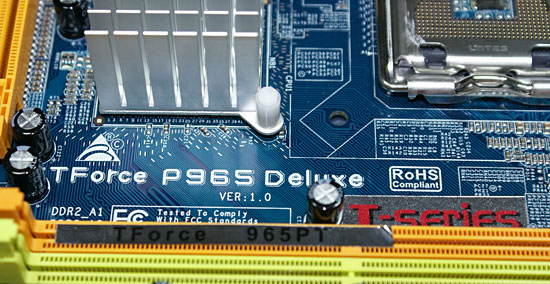 During testing it became obvious that we had two boards that stood out from the rest of the group and not because they were different. In fact, they grabbed our attention because they followed the cookie cutter process only with a twist. The first board that grabbed our attention is the Biostar TForce 965PT that is based on the Biostar TForce P965 Deluxe platform. In fact, if you peel the product label off the board you will see the P965 Deluxe silkscreen. The only difference between the two Biostar boards is the Intel ICH8 is used in place of the ICH8R found on the P965 Deluxe and a slightly different BIOS. Otherwise all of the positive aspects of the P965 Deluxe carry over to this board along with a $45 decrease in pricing. Gigabyte followed a similar path as the Gigabyte GA-965P-S3 is identical to the GA-965P-DS3 except for the type of capacitors utilized on the board and a different BIOS revision while reducing the price by $30. While not identical twins, both boards are close enough to their more expensive siblings to be considered fraternal twins in our opinion.

We originally had both of these boards in our budget category but based upon their performance and pricing right over the $100 mark we decided to separate them from our three truly budget (at least for the P965 chipset) motherboards from ECS, MSI, and Foxconn. While the stock performance between all five boards is within a couple of percent depending upon your memory choice, it was the overclocking capability of the Gigabyte and especially the Biostar board that dictated a change in our classification. In fact, the Biostar TForce 965PT board at $104.99 might just change how we look at overclocking on the Intel platform from a price/performance viewpoint. If Gigabyte can finally solve their Micron D9 issues then the GA-965P-S3 board will also fall into this new performance oriented budget category.

Let's get started and see how well our twins perform today.