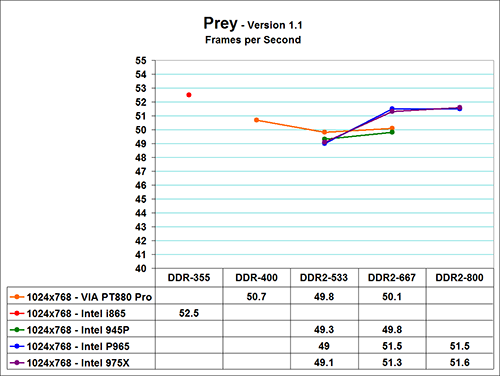 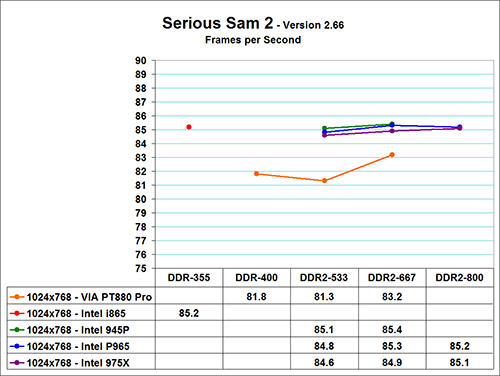 In our two games that tend to be GPU limited we see the i865 AGP/DDR solution scoring a win in Prey and coming in second in Serious Sam II where the Intel 945P pulls out a close victory at DDR2-667 settings. The VIA PT880 Pro performance trails the other solutions in SS2, similar to its Quake 4 performance. The difference is only 3-5%, though, so if the features offered (DDR and DDR2 support, AGP and PCIe support) interest you, it's still not a bad choice.

The sweet spot for gaming with this particular video card seems to be at low latency DDR2-667 settings as DDR2-800 provides negligible benefits. We are sure with lower latencies at DDR2-800 and a more powerful GPU solution that we would see further scaling increases in performance. However, for a value based system having DDR2 memory capable of 3-4-3 operation at DDR2-667 or DDR memory that does 2-2-2 at DDR400 is more than sufficient. Your money is best spent on a higher end GPU solution backed by a stable motherboard and a processor like the E6300/6400 Core 2 Duo for Intel systems or a AMD 3800+ X2 for the S939 or AM2 platforms.

Our conclusion from the first article still holds true. A user's choice of memory on our tested platforms is not going to make a huge difference considering the components and benchmarks utilized. The only difference in our expectations was just how close each chipset performed to the other during testing. We also ran our entire benchmark test suite and had the same overall results between chipsets. We came to a sudden and abrupt realization that features have increased dramatically in recent years but chipset performance has not for most users, certainly not to the degree of CPU or GPU improvements.

We did have a couple of surprises during testing and it caused us to retest the boards involved and also verify the results with different memory. One of these surprises centered on our choice for the Intel P965 and 975X chipsets. Our Biostar and DFI boards were the least expensive in their respective categories. We found out that except for the gaming performance of the Biostar board at DDR2-533, the P965 chipset is very competitive if not better performing than the 975X chipset when utilized with mid-range components. In our lab testing of overclocked boards with high end components we generally find the 975X based boards to be better performers in all areas. Unless you are matching high end components and plan on serious overclocking then a solid P965 or for that matter a 945P motherboard is sufficient for the low-end Core 2 Duo processors. In fact, we highly recommend the ASRock ConRoeXFire-eSATA2 and 775Dual-VSTA at this time for their unbeatable combination of price and performance in the budget sector for Core 2 Duo capable boards.

However, the biggest surprise was the overall performance of the ASRock 775i65G board as it was just as competitive with the other chipsets in our testing and proved to be extremely stable with every benchmark or application we threw at it. Who knew that AGP 8x and DDR would still be this competitive after a myriad of chipset, memory, CPU, and GPU enhancements over the last three years? [Ed:sarcastic reflection] While both technologies have come to their end we find it comforting to know that if you own either then you can still upgrade to the fastest processor series currently available and not worry about general system performance. That is unless you want to play the latest games at 1600x1200; in that case we will grudgingly have to advise you to go buy that PCI Express 7950 GX2 or X1900 XT along with the required components to support it. Until you reach the point where you're ready to make such an expenditure, these value based motherboards from ASRock are a wise purchase to extend the life of your current investment.