Advancing the Platform and Windows Beta 2

Bill Gates' keynote speech gives us a broad sweeping overview of the general message Microsoft wants to get out through WinHEC: the Microsoft platform is key in the development and delivery of any computing hardware. Whether you love him or hate him, Gates is absolutely correct. The heavy investment required in actually bringing consumer level computing hardware to market requires access to the largest pool of users possible, and currently Microsoft is where it's at.

In order to continue the trend, Microsoft needs to stay on top of emerging technologies. Right now, Windows XP lags woefully behind Apple's OSX in terms of interface design and productivity features. With Vista, Microsoft needs to show they can still compete with quality rather than simply quantity. In order to make it clear that Microsoft is aware of its situation, Gates spent some time going over features that next generation Microsoft products will feature, including everything from 64-bit multi-core computing and virtualization to new user interface designs and productivity enhancements. 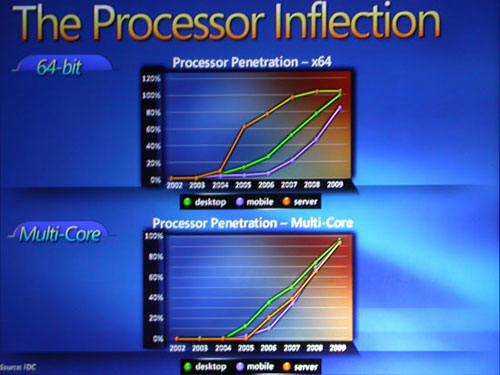 As adoption of 64-bit and multicore hardware increases, more and more benefit will come from applications and the operating system taking specific advantage of these features. One of the more interesting ways to utilize take advantage of these features is virtualization of the hardware. Microsoft is heavily pushing virtualization technology at this years WinHEC, dedicating many sessions to the topic. The basic idea is to enable multiple operating systems to run on one computer by allowing each to think it has full control of the hardware.

Microsoft showed a demo of Redhat Linux running under their new virtualization technology and explained how pervasive they want their interoperability to be. The reasoning behind this isn't altruistic by any means: Microsoft sees virtualization as one of the next big steps in computing, and they want to be the platform of choice for virtualizing hardware. The way they see it, even if a company wants to run a bunch of instances of Linux on one computer, it is a win if Microsoft can design the best platform to make it happen. From the looks of it, Microsoft is well on its way with their in house virtualization support. They demonstrated the capability to hot add devices and even virtual memory to client operating systems with no down time required.

On the user side, Gates showed off Microsoft's newly announced Beta 2 version of Vista. In addition to rehashing their recently announced newspaper interface, they showed of some of the cool features of Vista and Office. For instance, when editing a presentation, slides can be inserted from other available presentations, which will also be automatically updated if the original is altered. Widgets, like this one for the weather forecast, can sit docked and offer at a glance functionality, or pulled into the foreground and offer extended capabilities.

We will have to wait until Vista is finally released to know whether it will deliver on promises, but for now we are certainly hopeful that this will be a more significant step forward in user interface design than anything we've seen since Windows 95. Stay tuned for more coverage of WinHEC and what's going on in the hardware, driver, and Microsoft world.