Founded in 1986, MSI has a long and successful history in the computer component business. They are a top 5 motherboard manufacturer and for the last four years they have held the number one manufacturer position in discrete video card sales. MSI is also an emerging player in the consumer electronics market while also providing a broad range of products from optical drives to wireless network components.

The MSI K8N Diamond Plus motherboard we are reviewing today is the latest board in the Diamond series and offers an excellent feature set and performance level for the AMD enthusiast or gamer. You can find more information about the entire line of MSI products at their website. 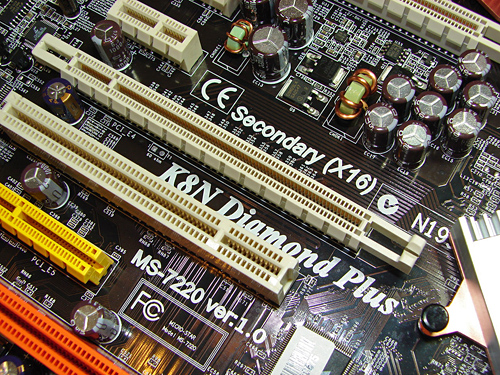 Our initial impression of the MSI K8N Diamond Plus upon opening the box is that it has an extensive feature list, cluttered yet clean layout, heat-pipe cooling system, and that the overall quality of components utilized by MSI is very good. The board retails in the US $190 range and arrives with an extensive accessory and documentation package. Besides the Asus A8N32-SLI and Abit AN8-32X, this is the only other AMD Socket 939 board to feature the NVIDIA nForce4 SLI X16 chipset configuration.

During our testing and general usage of the MSI K8N Diamond Plus we found the board's stability to be superb and it delivered class leading results in most of our synthetic and game benchmarks. Unfortunately, although the latest 3.0a BIOS release has generally improved the board's stability, overclocking options, and performance, we still incurred issues trying to get our particular sample to overclock in a similar fashion to our nForce4, ULi M1697, or ATI RD580/480 boards.

We met with limited success in the overclocking testing phase. While the board provided very competitive results when utilizing the stock multipliers, we had issues trying to POST near, at, or above a 300HTT setting. We tried numerous settings and various components over the entire test period with the board but just could not reach the 300HTT level and remain stable enough to complete our test suite. In the end, we were resigned to stay around a 285HTT level that left us disappointed as all other aspects of this board's performance are excellent. 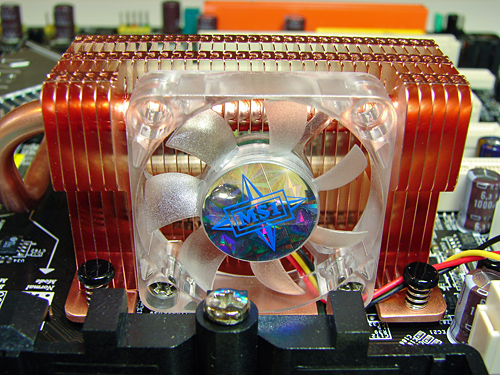 Due to the splitting of the PCI Express lanes between the Northbridge and Southbridge for the x16 graphics capability, plus the various peripheral traffic between the two bridges, and it could be argued this design will limit or hamper performance. Though this design does not consolidate all of the PCI Express lanes for graphics operations into a single chip solution such as the ATI Radeon Xpress 3200 (RD580) chipset, we did not notice any ill effects or slowdowns in our testing. In fact, with a 16-bit 1GHz HyperTransport link providing up to 8GB/s of bandwidth, the bandwidth available between the two bridge chipsets is the same as the bandwidth between the Northbridge and the Socket 939 CPU.

Now let's take a closer look at the features and performance the MSI K8N Diamond Plus offers.