Our second day at CES proved to be our most fun-filled yet, with tons of interesting technologies and much more to cover that what we're reporting here today. We will have follow-up coverage over the weekend and into next week so keep checking back.

CES 2006 Pre-Show Coverage: Before the official start of the show, ATI gave us a demonstration of their OCUR device that enables CableCard support in Windows Vista Media Center.

CES 2006 Day 1 Coverage: Our first day at the show gave us time with Dell's new 30" LCD panel as well as a preview of NVIDIA's Quad-SLI.

With that out of the way, it's time to revisit one of the more interesting items from our Day 1 coverage.

Up Close and Personal with NVIDIA's Quad-SLI

Yesterday we reported on Dell's Inspiron XPS 600 Renegade system that will be shipping with the world's first NVIDIA Quad-SLI setup. Unfortunately the system we showed you pictures of did not actually have the Quad-SLI cards installed, but today at NVIDIA's booth we were able to not only take some pictures of the actual setup but get a better understanding of how it works.

NVIDIA's Quad-SLI works on any nForce4 SLI motherboard with two PCIe x16 slots, in the case of Dell's XPS 600 Renegade the chipset of choice is a nForce4 SLI x16 Intel Edition. There is no technical reason the setup shouldn't work on an AMD nForce4 SLI x16 motherboard. 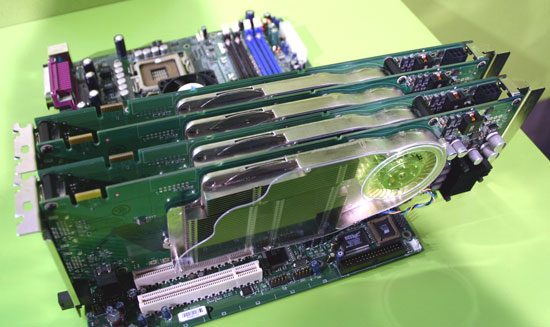 Although the picture above appears to be four independent cards, there are actually only two PCIe x16 cards plugged into the motherboard. Each pair of two PCBs features a master and a daughter GeForce 7800 GTX 512MB. There is a small connector that joins the master and daughter PCBs, but it isn't visible in the picture above. 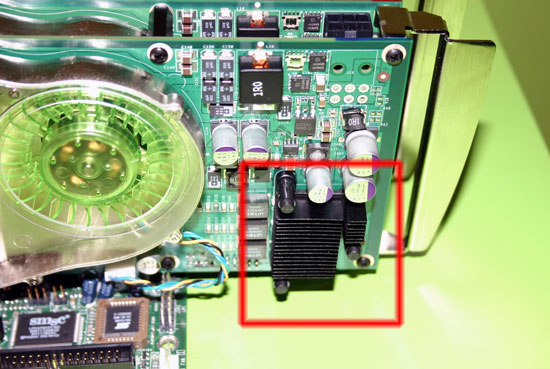 With both cards plugged into the motherboard, all that is left is to run SLI bridges connecting both master PCBs and both daughter PCBs to each other. Remember the hidden connector between the two PCBs on each card? That's what connects the master PCB to the daughter PCB on each card. 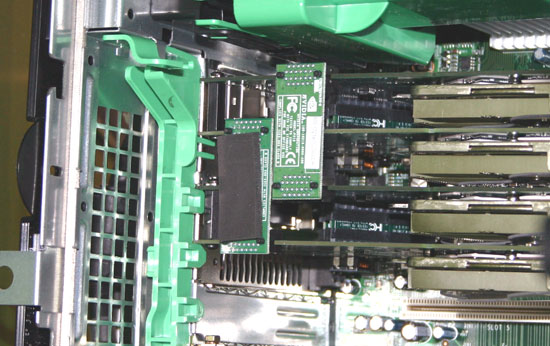 With the bridges installed, the hardware setup of NVIDIA's Quad-SLI is complete. NVIDIA had the Renegade with Quad-SLI hooked up to a Dell 3007WFP running at its native 2560 x 1600 resolution, which is pretty much where the setup is best used.