We've stated many times before how much we respect NVIDIA for getting their parts into consumers' hands on the day of their release. We've also mentioned how frustrating it is that ATI can never seem to get their gear out on the day of "release". This appears to again be the case right now for ATI's new laptop version of the X1600, the Mobility Radeon X1600. ATI's launch partner, ASUS, will be selling the part in their upcoming A7V notebook which is launching in Asia today, but the rest of the world will not be able to buy this solution just yet.

The X1600 is a mid-range graphics solution that is meant to perform at about the same level of the X800 GTO and the 6600 GT. The mobile version will probably be a good solution for laptops, as it offers good quality graphics without generating excessive heat and quickly sapping up all of your battery life.

When ATI announced the X1000 lineup two months ago, they had planned on having the desktop X1600 out on the 30th of November. Unfortunately for ATI, this day has come and gone, and there are still no X1600s to be found for sale at the time of this writing. The Mobility Radeon X1600 (MRX1600) is officially scheduled to be released today (December 5th) in Asia with a US release scheduled for mid-January, but we aren't sure when they will really be available to buy in either region. ATI assures us that ASUS has notebooks ready to sell, but availability unconfirmed as of yet.

The Mobility Radeon X1600 is essentially the same as its desktop counterpart with the exception that it is clocked slightly lower. Here are the specifications:

Compare this to the desktop version(s) of the proposed X1600 and we see much lower clocks. The X1600 XT was announced at launch to have 590MHz core and 1.38GHz memory clock speeds and 256MB of RAM. The MRX1600 is closer in implementation to the potential X1600 Pro, which might have 500MHz core and 780MHz memory clocks. The other major downgrade the mobile that mid-range part gets is in memory size to 128MB. The coolness factor comes in when you realize that ATI can pack the GPU and all of its RAM on a 46mm X 46mm square package. 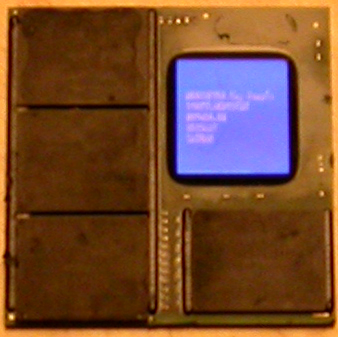 As of right now, HD quality H.264 decompression takes up too much processing power to run smoothly on a PC, but with the MRX1600, ATI is promising HD video decoding in graphics hardware. This is good news, but unfortunately, neither ATI nor NVIDIA have released a driver that supports it. We feel that it's a little premature to list something as a "feature" before it's actually supported, but hopefully, we'll see these drivers sooner rather than later.