Update: If you're looking for instructions on how to disassemble the new slim Xbox 360 read our updated guide here!

Microsoft's first try at a gaming console amounted to essentially a very affordable PC.  It used standard PC components, including a mobile Intel processor (a hybrid Pentium 3/Celeron), a desktop NVIDIA chipset, a Western Digital hard drive and relatively standard PC DVD-ROM.  The original Xbox was such a PC in fact that there were quite a few users that wanted to mod it simply to have a cheap PC, not even for gaming - including ourselves.

Before the Xbox was launched, Microsoft was very concerned with users thinking of the Xbox as nothing more than a PC branded as a gaming console, so it went to great lengths to reduce the association.  For example, the strict ban on keyboard and mouse support, despite the fact that the console implemented the standard USB interface.

With the Xbox 360, Microsoft gained some benefits of the original Xbox success.  Xbox didn't win the sales battle against Sony's PlayStation 2, but the first Xbox was strong enough to cement Microsoft's name in the world of console gaming manufacturers.  For their second time around, there is less worry of the Xbox 360 being viewed as a just a PC, so Microsoft took a bolder approach.

Honestly, with the Xbox 360, Microsoft could have put forth another PC in a black box and it probably would have done fine.  But with their second gaming console, the target was growth -- and Sony.  With an established name and fanbase, it was time to take the market seriously and start to exert some dominance and thus the Xbox went from being a clunky black box of a PC, to a stylish consumer electronics device.

The Xbox 360 is smaller than the original Xbox, and its wireless nature makes it a natural fit in the living room - marking a thankful change from standard gaming consoles of the past.  Despite looking like the offspring of an iPod and a DVD player, the Xbox 360 is still very much a PC on the inside.  As such, it's got all of the components we're used to.

With less than a week to go before the retail availability of Xbox 360 consoles, we got our hands on one to give it the usual AnandTech once-over.  And take it apart of course.

What's in the Box?

Our Xbox 360 system was the $399 unit, which comes with the following: 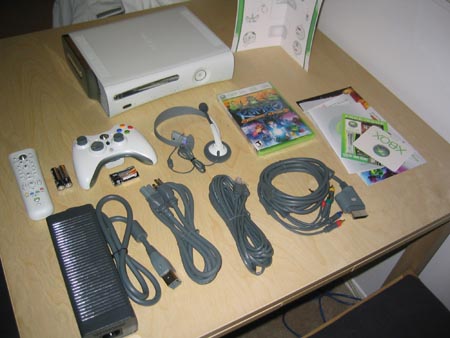 The $299 core system gives you the same console (with a white DVD tray cover), a wired controller, and standard composite AV cables; there's no hard drive, headset or remote.