by Anand Lal Shimpi on August 4, 2005 8:10 PM EST
45 Comments | Add A Comment
45 Comments + Add A
Comment
About a year ago, I put all prejudices aside, cast away all of my prior experiences with the platform, and I tried a Mac for a month.

The experiment, as I called it back then, was very much a success.  I've integrated the Mac platform into my regular computer usage, using it for a lot of my work, while also continuing to be an avid PC user.  Giving Macs a chance for the first time last year wasn't all that hard, except for one major issue on which I would not budge: the mouse.

One of the defining Mac vs. PC arguments has always been the mouse argument; more specifically, Macs had one-button mice, while PCs had two.  More recently, PCs grew a few more buttons and wheels on their mice, all the while Apple refused to move beyond the one.  There are many justifications thrown about for the use of a one-button mouse, just as there are many for the use of a multi-button mouse, but regardless of what they are, they have been here for a couple of decades now.

Back during the planning days of my Mac experiment, I knew that in order to give the platform a fair chance, I couldn't use that mouse.  I'd spent my mousing-life with two buttons and having to give one of them up would be too much to ask, if I were to be as objective as possible.  As time went on, I began to see both sides of the argument and truth be told, today, I can actually get by with a one-button mouse on a Mac just fine.  I still prefer to have a multi-button mouse, but it's not the deal breaker for me that it once was.

Of course, now that it's no longer a problem for me, Apple finally broke tradition and launched their first multi-button mouse for USB enabled Macs, and it's called the Mighty Mouse and it retails for $49.99. 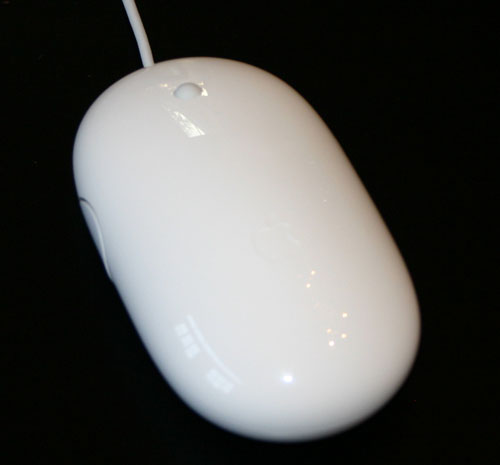 The Mighty Mouse looks a lot like Apple's previous one-button mouse, with a few visible exceptions.  The first obvious difference is that the Mighty Mouse features a scroll ball, whereas previous mice had no scrolling specific buttons/balls/wheels.  The second difference is that there are now two side buttons on the mouse (they existed on prior Apple mice, but they didn't function as buttons). Looks can be deceiving as the two side buttons of the Mighty Mouse only function as one, and only if they are both depressed at the same time. 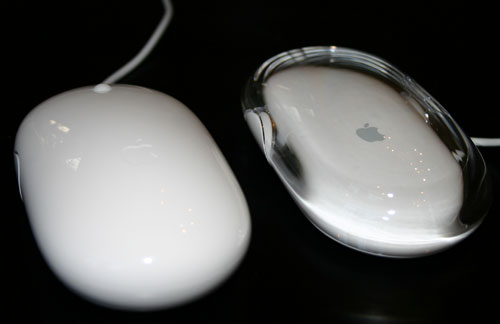 The third item worth mentioning isn't a difference at all, but rather a similarity between the Mighty Mouse and prior Apple mice - the surface of the mouse hasn't changed at all.

Apple's one button mice in the past haven't really had a button; rather, the entire surface of the mouse acts as the primary mouse button. Pushing it down makes the mouse click and acts as a left or primary click.  The Mighty Mouse works the same way, but there are now touch sensors below the left and right halves of the mouse that sense whether or not you are trying to left or right click.  So, although a left and right click mechanically trigger the same button, the sensors below the surface of the mouse determine the sort of a click that you're trying to perform. I'll get to whether or not this actually works well in a moment. 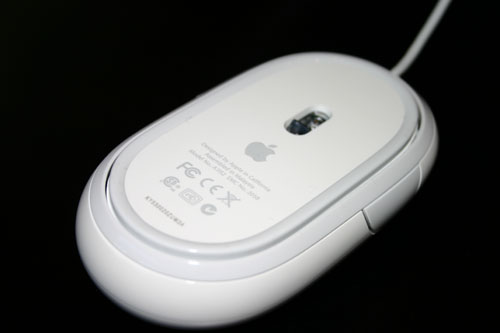 The underbelly of the Mighty Mouse

Along with the mouse comes a new mouse driver that allows you to configure the various buttons and settings for the Mighty Mouse.  The settings themselves are pretty self-explanatory, although there is one glaring absence that I will touch on a bit more later; the lack of any control for how many lines are scrolled when using the scroll ball is a major omission of the first Mighty Mouse drivers. 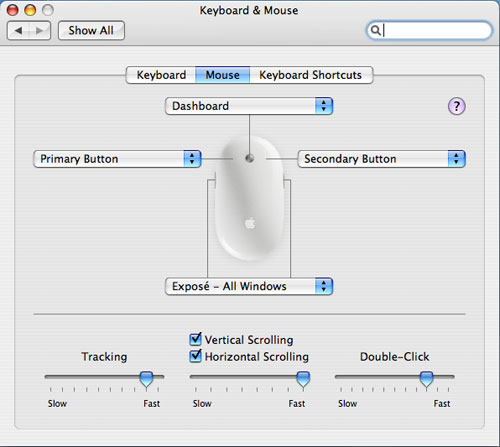 The remaining aspects of the new drivers are fairly run of the mill. You can configure any of the buttons to perform everything from performing an Exposé operation, bringing up the Dashboard or even launching another script/application.

Quite possibly the most important point about the drivers is that both the left and right mouse "buttons" are configured to left or primary click by default.  You have to go into the Mouse Preferences and assign the right mouse action to act as a secondary button before it'll work as such.  This default setting gives us much insight into Apple's intentions with the Mighty Mouse. The Mighty Mouse isn't Apple's embracing of the two-button mouse; it is Apple's way of offering the option to those who truly want it, yet still making the Mighty Mouse a primarily one-button device.

Apple has effectively built the world's first multi-button mouse that's designed to look and work primarily like a one-button mouse.  And now it's time to find out if they did a good job in doing so...