It has been a busy CES 2022 for laptop and notebook manufacturers, with many new Intel and AMD mobile processors being announced and NVIDIA's latest GeForce RTX 30 series mobile graphics cards. ASUS has updated a number of its ranges for 2022, including its TUF Gaming series. One of these is the TUF Dash 15, with a 15.6-inch screen available with either a 2560 x 1440p 165 Hz or 1920 x 1080p 300 Hz panel, the latest Intel Alder Lake mobile processor, NVIDIA's GeForce RTX 30 series graphics, and Thunderbolt 4 connectivity.

Refreshed for 2022, the ASUS TUF Dash F15 has been upgraded with new features. Users have the choice between two different designs, off black or in moonlight white. ASUS claims that the touchpad is 27% bigger than the 2021 version while boasting a new and improved cooling system. The TUF Dash F15 uses ASUS's new 84-blade Arc Flow fans that ASUS claims improve airflow by up to 13%. 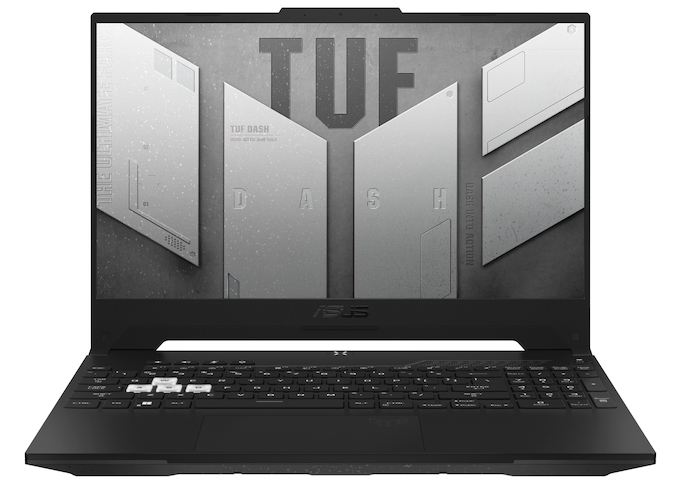 The ASUS TUF Dash F15 features a 15.6-inch display and can be had with either a 165 Hz 2560 x 1440p or fast 300 Hz 1920 x 1080p screen, with both including support for Adaptive Sync and featuring a 3 ms response time. Powering the display is an NVIDIA GeForce RTX 3070 laptop graphics card while computing power is handled by an Intel Core i7-12650H Alder Lake mobile processor.

There's also support for up to 16 GB of DDR5-4800 memory, up to and including two PCIe 4.0 x4 M.2 NVMe storage drives, and it comes with a 76 Wh battery with support for Type-C charging. ASUS also includes a Thunderbolt 4 Type-C port, but ASUS hasn't unveiled a complete list of specifications or configurations at the time of writing.

ASUS hasn't informed us when the TUF Dash F15 (2022) will be available or how much it will retail for.