What’s more interesting than ST performance, is MT performance. With 8 performance cores and 2 efficiency cores, this is now the largest iteration of Apple Silicon we’ve seen.

As a prelude into the scores, I wanted to remark some things on the previous smaller M1 chip. The 4+4 setup on the M1 actually resulted that a significant chunk of the MT performance being enabled by the E-cores, with the SPECint score in particular seeing a +33% performance boost versus just the 4 P-cores of the system. Because the new M1 Pro and Max have 2 less E-cores, just assuming linear scaling, the theoretical peak of the M1 Pro/Max should be +62% over the M1. Of course, the new chips should behave better than linear, due to the better memory subsystem.

In the detailed scores I’m showcasing the full 8+2 scores of the new chips, and later we’ll talk about the 8 P scores in context. I hadn’t run the MT scores of the new Fortran compiler set on the M1 and some numbers will be missing from the charts because of that reason. 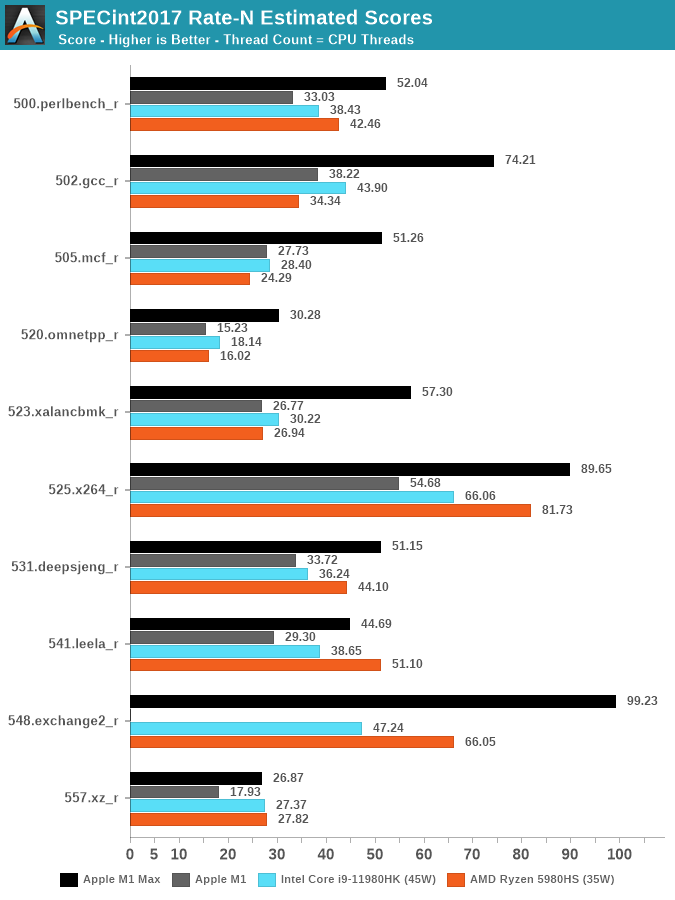 Looking at the data – there’s very evident changes to Apple’s performance positioning with the new 10-core CPU. Although, yes, Apple does have 2 additional cores versus the 8-core 11980HK or the 5980HS, the performance advantages of Apple’s silicon is far ahead of either competitor in most workloads. Again, to reiterate, we’re comparing the M1 Max against Intel’s best of the best, and also nearly AMD’s best (The 5980HX has a 45W TDP).

The one workload standing out to me the most was 502.gcc_r, where the M1 Max nearly doubles the M1 score, and lands in +69% ahead of the 11980HK. We’re seeing similar mind-boggling performance deltas in other workloads, memory bound tests such as mcf and omnetpp are evidently in Apple’s forte. A few of the workloads, mostly more core-bound or L2 resident, have less advantages, or sometimes even fall behind AMD’s CPUs. 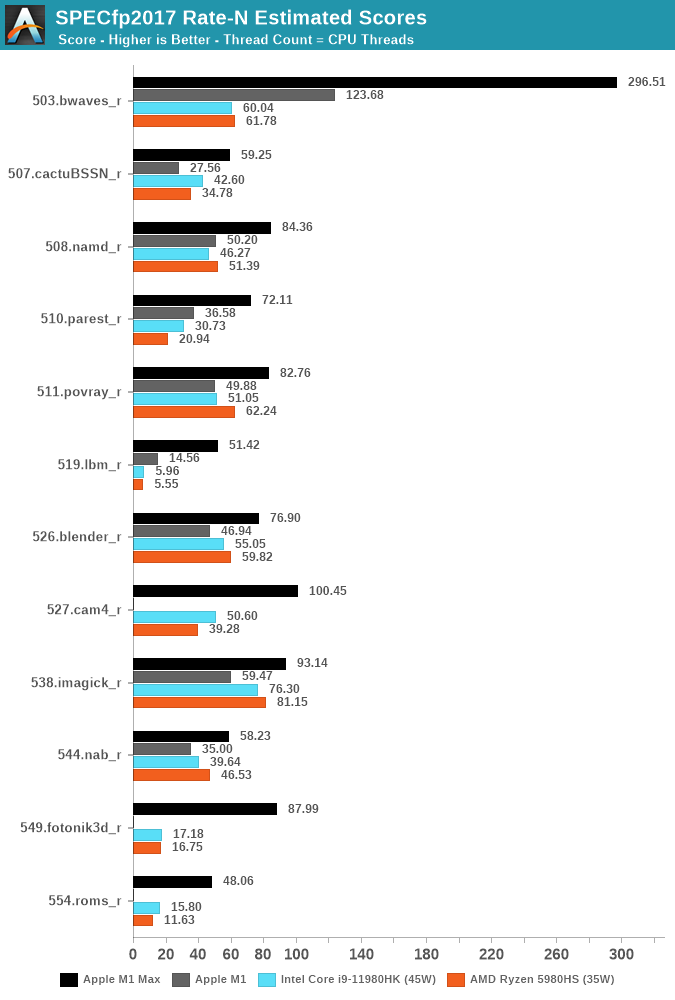 The fp2017 suite has more workloads that are more memory-bound, and it’s here where the M1 Max is absolutely absurd. The workloads that put the most memory pressure and stress the DRAM the most, such as 503.bwaves, 519.lbm, 549.fotonik3d and 554.roms, have all multiple factors of performance advantages compared to the best Intel and AMD have to offer.

The performance differences here are just insane, and really showcase just how far ahead Apple’s memory subsystem is in its ability to allow the CPUs to scale to such degree in memory-bound workloads.

Even workloads which are more execution bound, such as 511.porvray or 538.imagick, are – albeit not as dramatically, still very much clearly in favour of the M1 Max, achieving significantly better performance at drastically lower power.

We noted how the M1 Max CPUs are not able to fully take advantage of the DRAM bandwidth of the chip, and as of writing we didn’t measure the M1 Pro, but imagine that design not to score much lower than the M1 Max here. We can’t help but ask ourselves how much better the CPUs would score if the cluster and fabric would allow them to fully utilise the memory. 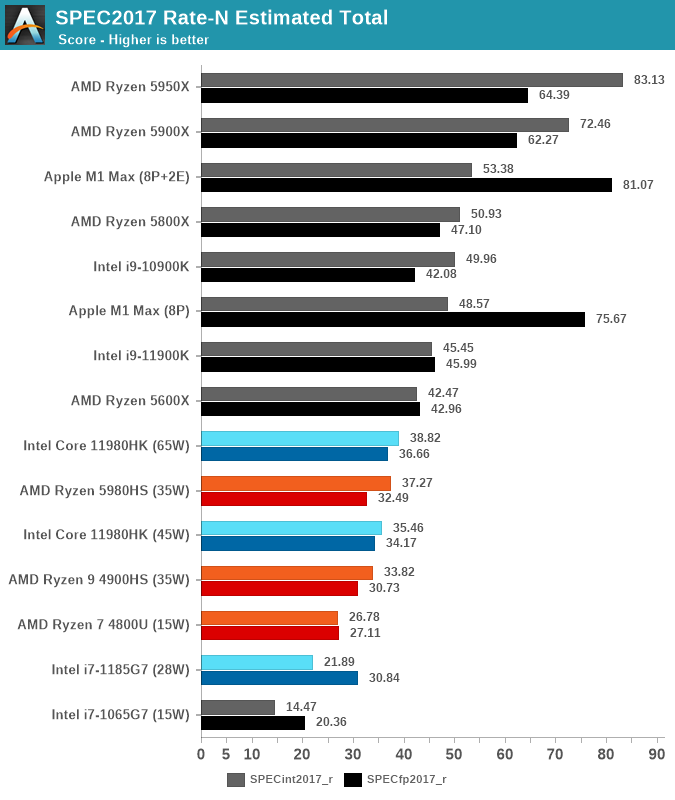 In the aggregate scores – there’s two sides. On the SPECint work suite, the M1 Max lies +37% ahead of the best competition, it’s a very clear win here and given the power levels and TDPs, the performance per watt advantages is clear. The M1 Max is also able to outperform desktop chips such as the 11900K, or AMD’s 5800X.

In the SPECfp suite, the M1 Max is in its own category of silicon with no comparison in the market. It completely demolishes any laptop contender, showcasing 2.2x performance of the second-best laptop chip. The M1 Max even manages to outperform the 16-core 5950X – a chip whose package power is at 142W, with rest of system even quite above that. It’s an absolutely absurd comparison and a situation we haven’t seen the likes of.

We also ran the chip with just the 8 performance cores active, as expected, the scores are a little lower at -7-9%, the 2 E-cores here represent a much smaller percentage of the total MT performance than on the M1.

Apple’s stark advantage in specific workloads here do make us ask the question how this translates into application and use-cases. We’ve never seen such a design before, so it’s not exactly clear where things would land, but I think Apple has been rather clear that their focus with these designs is catering to the content creation crowd, the power users who use the large productivity applications, be it in video editing, audio mastering, or code compiling. These are all areas where the microarchitectural characteristics of the M1 Pro/Max would shine and are likely vastly outperform any other system out there.