With our test setup and methodology employed, we will be splitting the results extrapolated from our testing on each of the four Z590 motherboards. We feel this is fair due to each motherboard vendor enforcing each of its own tweaks via multi-core enhancement settings and we believe this is enough to make subtle differences to performance. We've split the results into four graphs per test, so one for each Z590 model we've tested on, with both stock and overclocked results for comparison.

The Persistence of Vision Ray Tracer, or POV-Ray, is a freeware package for as the name suggests, ray tracing. It is a pure renderer, rather than modeling software, but the latest beta version contains a handy benchmark for stressing all processing threads on a platform. We have been using this test in motherboard reviews to test memory stability at various CPU speeds to good effect – if it passes the test, the IMC in the CPU is stable for a given CPU speed. As a CPU test, it runs for approximately 1-2 minutes on high-end platforms. 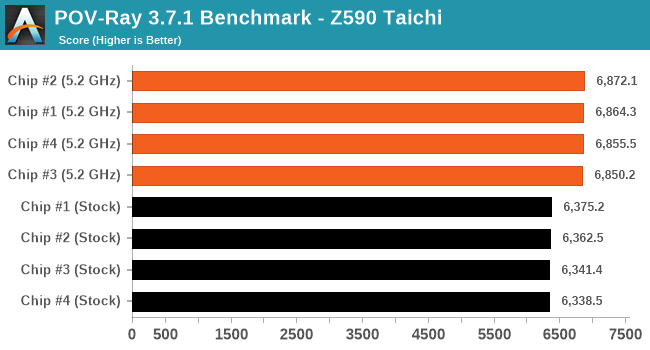 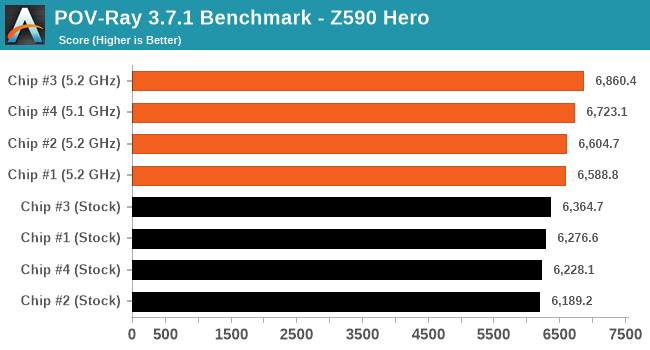 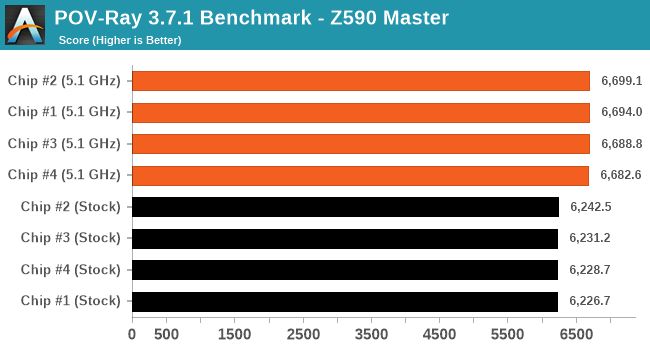 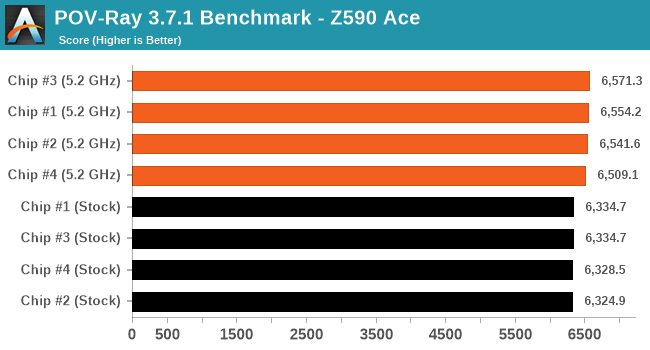 In our POV-Ray testing, all four of the processors on each board managed to beat default performance convincingly with an average increase of 6.4%.

Maxon's real-world and cross-platform Cinebench test suite has been a staple in benchmarking and rendering performance for many years. Its latest installment is the R23 version, which is based on its latest 23 code which uses updated compilers. It acts as a real-world system benchmark that incorporates common tasks and rendering workloads as opposed to less diverse benchmarks which only take measurements based on certain CPU functions. Cinebench R23 can also measure both single-threaded and multi-threaded performance. 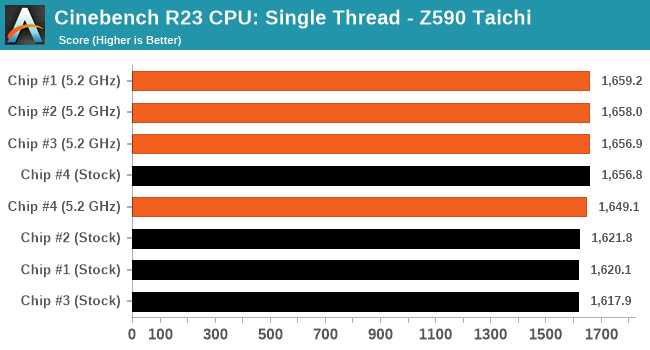 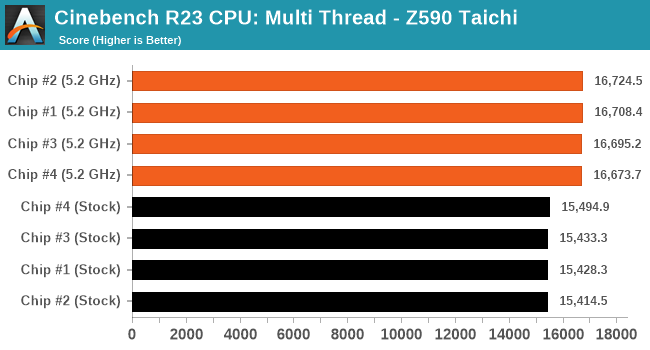 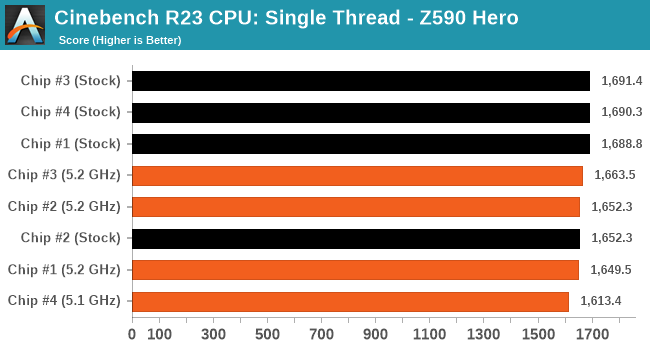 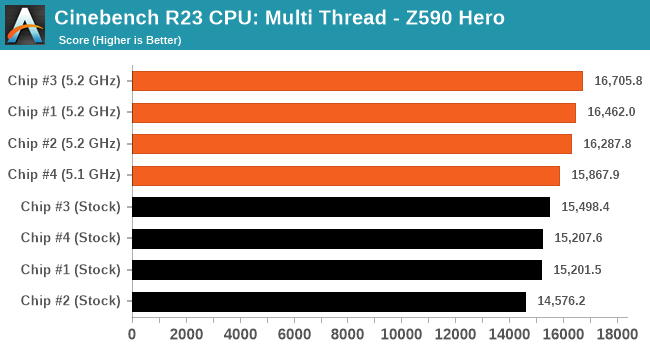 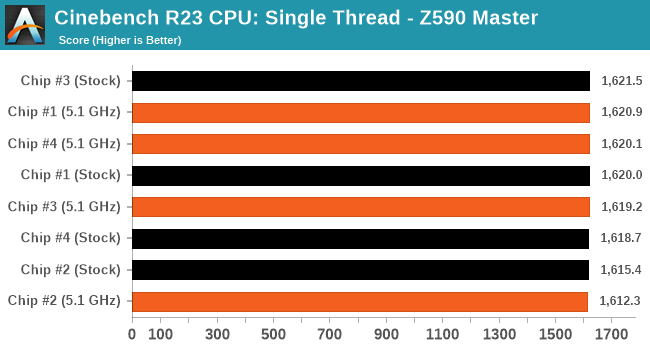 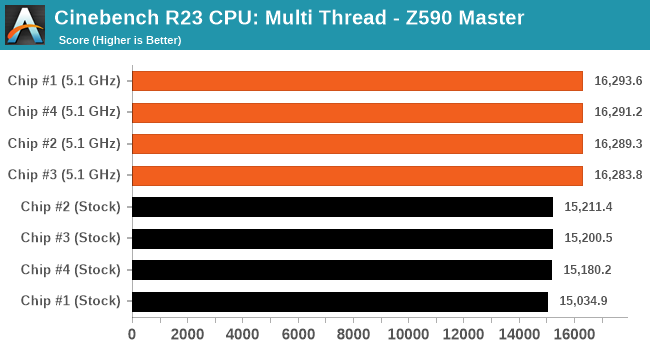 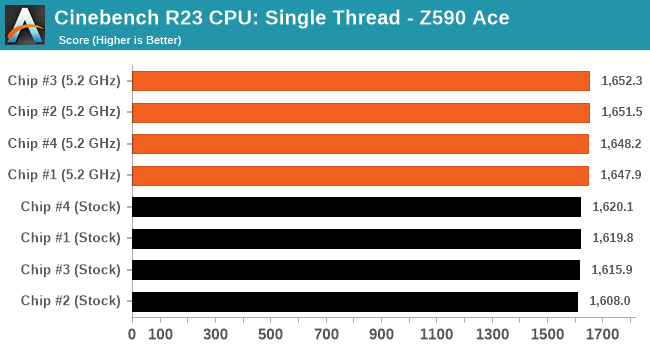 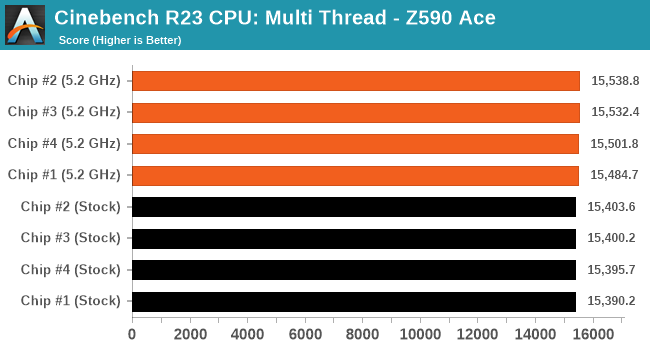 In CineBench R23, we saw a marginal uplift in performance in single-thread performance on average, but the biggest gains were in the multi-thread test with an average increase of 6% over default values. In perspective, the single-threaded performance gains in CB23 were around 0.04%. The reason why the ST values aren't popping here is because the stock CPU enables turbo with TVB to 5.3 GHz, whereas we are fixing each chip to 5.2 GHz all-core.