In my first encounter with a Mac, I ragged on Safari for being a major disappointment under OS X; the browser looked great and was very user friendly, but it was sluggish and had a handful of annoying incompatibilities.  With Tiger, Apple ships an updated version of Safari called Safari RSS.

As its name implies, Safari RSS now allows you to read RSS feeds directly within the browser.  Safari's integrated RSS reader is easy to read, well laid out, and works well within the Safari interface.  I haven't really caught the RSS bug just yet, but Safari's implementation is quite nice.  The only problem I have with it is that if a site offers more than one RSS feed, there's no way of accessing any but the first RSS feed listed in the site's code (Firefox will let you subscribe to any of multiple RSS feeds off of a single site without any problems). 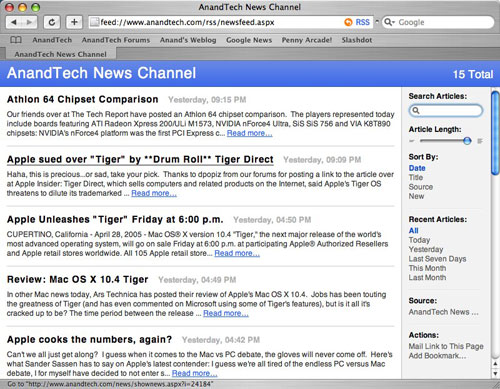 Safari RSS also adds the ability to "archive" web pages; that is, download and store locally all of the content of a single web page.  You can archive by going to save a web page as you normally would, but change the file format to Web Archive (.webarchive extension).  The end result is just what you'd expect - a completely local copy of the web page that still opens in Safari.  The archive functionality doesn't go deeper into the site that you're visiting - it only saves the current page, not anything to which it links.  I haven't found much use for the archive function, although a similar function enabled by the Firefox ScrapBook plugin helped me make some multitasking tests for our dual core reviews earlier this month. 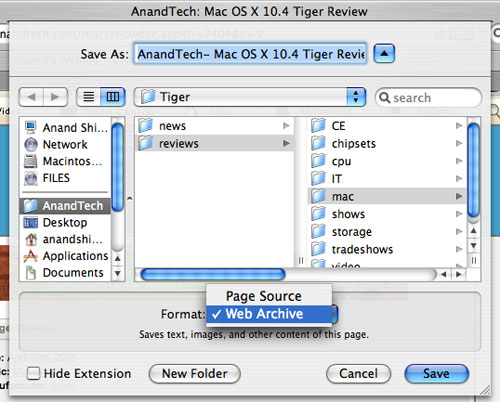 Another interesting feature of Safari is the ability to enable Private Browsing, where no pages are added to the history, your Google searches aren't remembered, downloaded files are immediately removed from the download manager and information isn't saved for AutoFill.  Private Browsing is incredibly useful when you are using a Mac shared by multiple people. I can see the feature being very beneficial in campus lab environments, but of course, I'm sure that you can think of other uses for the feature. 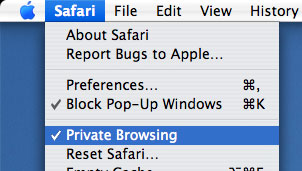 The last major feature of Safari is its support for in-browser PDF viewing.  Whenever you click on a link to a PDF file, Safari no longer downloads it and opens it in a Preview window.  Instead, the PDF is loaded directly within your browser window and from there, you have the option of opening it in Preview instead.  While I'm fine with using Safari to read through PDFs on the web, I'm sure others would like the option of having it default to opening in Preview. Currently, there is no such default option. 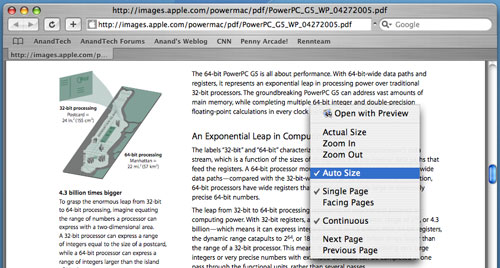 The one option that I personally wish were there is the ability to, by default, have the PDF always auto-size itself to fit in my browser window.  I tend to run a much larger browser window than most PDFs' default size, so I always have to right-click on the PDF and ask Safari to scale the document to fit my window.  Not having to do that every time I read a PDF would be helpful.  Unlike other examples of browser-integrated PDF reading, there aren't any stability issues introduced by having Safari display PDFs in a browser window - it's thankfully only a preference/convenience decision.

Shortly before Tiger's official ship date, Apple released a brand new update of Safari for Panther users - Safari 1.3.  Safari 1.3 (a part of OS X 10.3.9) offered some major improvements, mostly in the areas of performance and stability.  The latest version of Safari finally solved the vast majority of my performance complaints about the browser, and as you would expect, Safari 1.3 under Panther performs quite similarly to Safari RSS under Tiger.

There are many cases now where Safari is actually faster than Firefox, but there are still some situations where Firefox is faster.  What is most important is that Safari no longer feels like a slow browser, which greatly contributes to the subjective take on how fast modern day Macs happen to be - an area of weakness that can use any sort of improvement as is possible.

Safari's compatibility has come to bother me on a few occasions. Although, all of the sites that originally had Safari incompatibilities when I first started using the browser about a year ago have since been fixed.  There still continue to be day-to-day incompatibilities with Safari; whenever I visit a website and things don't work exactly the way that I'd assume they would, I first have to open the page in Firefox to make sure it's not Safari causing the problems.  This usually is a problem whenever I'm ordering something online or filling out any sort of form using Safari. If the submit button doesn't do anything or I get an error telling me that I didn't fill something out, yet I clearly did, then I know that I've been hit with another Safari incompatibility.  For the most part, I'd say that Safari works fine on 100% of the sites that I read on a regular basis; however, it's the random sites or the times when I'm using sites that I rarely use that I sometimes encounter incompatibilities.  They are annoying, but it's something that I've come to live with.

By far, the biggest problem with Safari that I've had is that the browser crashes, a lot, with certain web pages.  Sometimes the crashing appears to be related to Flash; other times, it appears to be Javascript related and then there are other times when I can't even begin to pinpoint why it crashes.  The problem seemed to have developed over time (possibly being made worse by subsequent OS X patches or just seeming that way by increased use of the browser), but it is definitely present on all systems.  One thing that makes it difficult to diagnose is that I often have a large number of tabs open at once, and any one of those tabs could cause the instability.  Needless to say, losing all open Safari tabs is a bit of a pain, and it's unfortunately something that hasn't been completely fixed in Safari RSS, but it does seem to have been somewhat addressed.  I've only had a couple of crashes on the final version of Safari RSS and I've been using it a lot in preparation for this review.

I've mentioned in previous articles that I've always stuck with Safari because its look, feel and behavior matched what I'd expect from all other OS X applications.  With Safari RSS, the decision to use Safari over something like Firefox or Camino (both of which I keep installed) is much less of a tradeoff.  I only wish that Apple would add support for "find as you type" to Safari - it's the one feature that I truly do miss from Firefox.