One feature that's always intrigued me about OS X is how powerful yet fairly accessible of a scripting language AppleScript happens to be.  Despite its relative ease of use, I hardly ever found myself using AppleScript to get things done.  I never seemed to have enough time to sit down and become comfortable enough with the language, regardless of how much easier it would make my life.

Tiger brings another tool to the table that can work either with or in lieu of AppleScript for those who aren't interested in learning the language, and that tool is called Automator.  One underlying theme of features like Automator and Dashboard in Tiger is to take functionality that was essentially present in Panther, and make it something that's accessible and actually used by the masses in Tiger.  With Dashboard, Apple has taken many of the features of Sherlock - a rarely used and rarely talked about tool in Panther, and re-packaged them in a much more user friendly environment that is Dashboard.  With Automator, Apple has taken many of the types of tasks that you can accomplish using AppleScript and made them infinitely more user friendly.

To the end user, Automator is basically a drag-'n-drop batch job generator that happens to be very flexible.  Automator allows you to create a workflow of actions, with each action performing specific tasks on its inputs and passing it along to the next action.  For example, one of the actions that ships with Tiger is an action to get all image URLs from a web page in Safari.  With all of the image URLs, you can then feed them into another action to download all of the images to a specific folder.  You can then feed all of those images that you've just downloaded into another action that scales all images to a certain size.  The workflow that I've just described can be even more complicated, taking the scaled images and doing pretty much whatever you'd like with them - you can even nest workflows inside of other workflows to achieve even more robust results.  What's most important about Automator is that all of this is done in an extremely simple and easy-to-use manner.

You select the category of action from the left; the actions are grouped according to what applications with which they are associated. Then, you select what action you want to perform and drag it into the right pane to add it to your workflow.  The workflow is linear and doesn't branch, so anything at the top of the workflow feeds into anything below it.  Automator handles all error checking and will warn you if your workflow is going to do something destructive to files or if you are feeding the results of one action into another that isn't compatible (e.g. sending image files into an action that is expecting a URL to be inputted).  You can also search for the action that you're looking for using the search box at the top of the Automator window. However, keep in mind that the search box doesn't search descriptions of the actions, just their titles - so searching for "resize" won't bring up anything, but searching for "scale" will bring up the scale images action (somewhat silly considering how big of a deal searching is within Tiger). 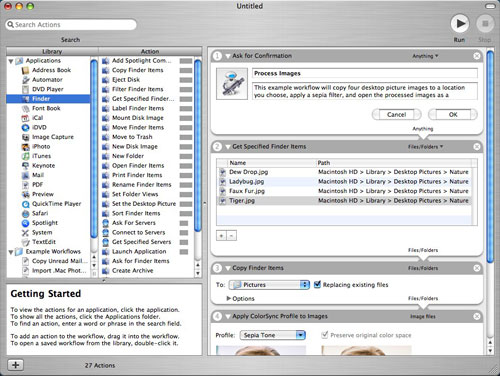 Once you've created a workflow, you can save it as a workflow to be opened with Automator or you can save it as a plug-in that can be executed without ever running the Automator application.  I would strongly caution you to test your workflows on sample data that you don't care about before actually using it on something important.  The reason behind this warning is that some of the built-in actions don't work exactly that the way you'd expect them to.  For example, I tried creating a workflow that would take a bunch of selected images, make copies of them, rename them and resize them - a similar set of tasks that I would do on a regular basis for any AnandTech article.  The images that I was using for this particular task were on the desktop and I decided to just copy the items to the desktop as well.  The Copy Finder Items action has an option to replace existing files, which I left unchecked, assuming that it meant that my original files would not be overwritten.  Apparently, my assumption was incorrect, as the action did overwrite my original files.  I figured something like this would happen, so I used a picture that I didn't care too much about, but it can be confusing - it was to me, at least.

The potential for Automator is tremendous. However, I found myself wanting many more actions than what is supplied with Tiger.  Although Apple has pretty good documentation on their developer site of how to create your own actions, doing so basically nullifies one of the major attractions to Automator, which is bringing this sort of automated functionality to the masses.  There are presently some Automator actions that are available for download from Apple's web site.  With further development and support from the community, Automator could very well become one of the most useful items in Tiger, but as it stands now, I'm not sure how much use the majority of users will get out of it.