Kingston is the world's largest independent Memory manufacturer with annual sales over $2.4 Billion. Kingston is a very well-known memory brand, and it can be found at almost any large computer dealer. Kingston has a very complete line of memory products from the cheapest Value RAM to their enthusiast HyperX products. Kingston is also a brand that you will often see on sale at the big computer chains. 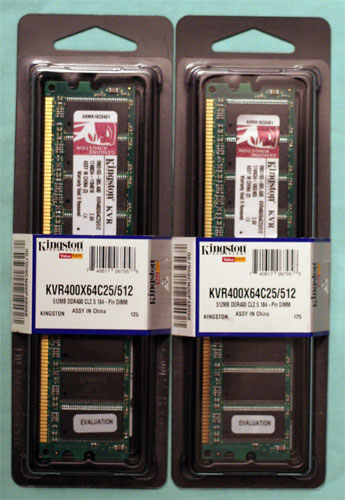 Heatspreaders are not as often seen in Value products, since manufacturers are usually doing whatever is necessary to bring in the lowest price. This means eliminating extras like heatspreaders. Memory chips on the CAS 2.5 are blanks that are labeled with the Kingston logo.

We haven't made a mistake here. As you can see, there is really no overclocking headroom at all with this Kingston 2.5 memory. While it actually outperforms specs with 2.5-3-2-6- timings at DDR400 at stock 2.6V, we could not complete our memory benchmarks above a 204 CPU setting. Super Pi and Unbuffered Memory tests worked fine to almost DDR480, but at any setting above 204 (DDR408), games would freeze or run in spurts and freezes. This points to a likely conflict with the AMD on-chip memory controller or the DFI nF4 motherboard, and in fact, the Kingston 2.5 may reach much high memory speeds on an Intel platform.

We have found Aida 32 to be very useful in examining read/write performance and memory latency. Aida 32 is now available as Everest Home Edition, a free download from www.lavalys.com.


The Memory Speed range was so limited with the Kingston CAS 2.5 that there is really little on which to comment. However, despite the problems above 204 on the Athlon 64, at stock DDR400, the Kingston KVR400X64C25/512 performed without any problems.