Picking up from the power efficiency discussion, let’s dive directly into the multi-threaded SPEC results. As usual, because these are not officially submitted scores to SPEC, we’re labelling the results as “estimates” as per the SPEC rules and license.

We compile the binaries with GCC 10.2 on their respective platforms, with simple -Ofast optimisation flags and relevant architecture and machine tuning flags (-march/-mtune=Neoverse-n1 ; -march/-mtune=skylake-avx512 ; -march/-mtune=znver2). For the new Zen3 Milan parts, as GCC 10.2 at the time didn’t have support for the new microarchitecture, we’re using the same Zen2 binaries as on Rome, as otherwise we’d have to rerun all numbers on all platforms with a newer GCC 11 baseline – something we will do in the future but out of the scope of this piece.

In terms of data-points, we’re comparing the new 7763 against a 7742, as well as the top socketed SKUs from the competition, including a Xeon 8280 (Equivalent to a Xeon 6258R), and Ampere’s Arm-based Altra Q80-33. It’s to be noted that the 7763 is a 280W part, and thus lands in higher than the other three chips, but we wanted to compare the top of the stack with the best available parts we had available for testing. 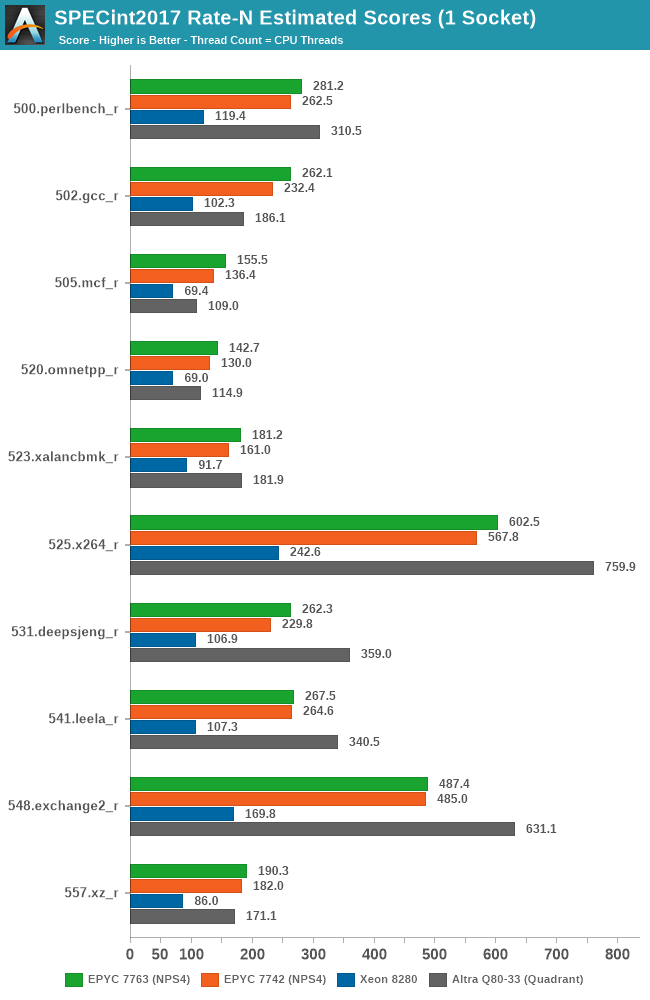 Generationally, the new 7763 does outperform the 7742 across the board, but generally the magnitude isn’t quite as large as you’d expect given the 40W higher TDP of the chip – a performance delta that gets even tighter when configuring the 7742 to a 240W cTDP.

Against the competition, AMD’s traditional adversary Intel doesn’t really stand a chance as the Milan chip is posting well over double the performance in almost all workloads.

The newer competition AMD should worry about is Ampere’s new Altra system – which currently still outperforms the top-end Milan based 7763 in several compute-heavy benchmarks by notably margins. In more memory-heavy workloads, the EPYC more easily beats the Altra due to having essentially 8x the total cache per chip at 256MB vs 32MB. 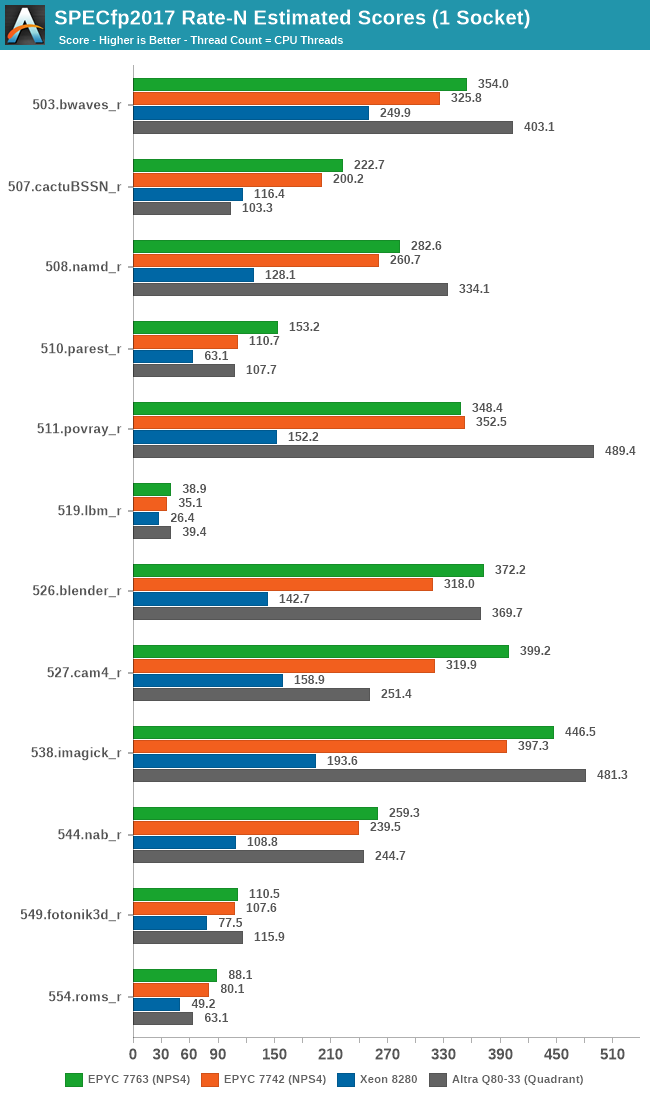 We’re seeing a similar story in SPECfp2017, more oriented towards HPC workloads. The one result that stands out here is 511.povray, in which the 7763 loses out to the previous generation 7742 due to the workload being more core-bound, and the Milan chip having a lesser effective thermal envelope available for the cores, even at the higher 280W TDP.

Intel’s 8280 again really isn’t a viable competition to AMD’s chips, with the Ampere Altra being a closer match for AMD’s EPYC, winning some, losing some. 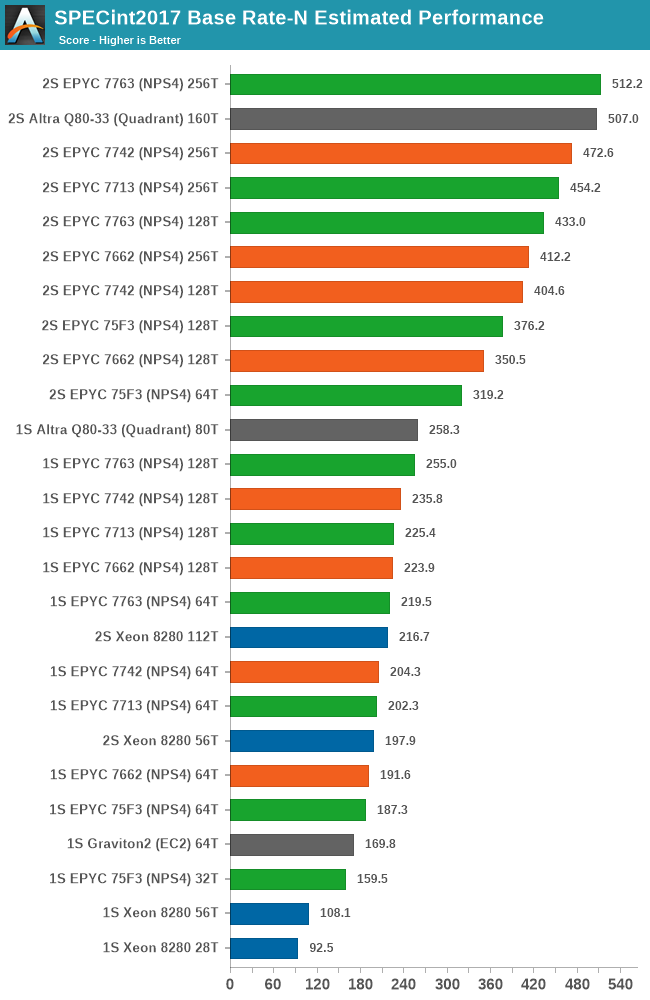 With Milan, AMD is now retaking the performance lead in SPECint2017, although by only a small margin.

Comparing the 7713 against the 7742, things aren’t looking as great, as the new Milan part sees a 4% performance regression. It’s to be noted again that AMD had claimed the 7713 is a direct successor to the 7662, where it does fare 10% better, however that is a $900 cheaper part.

Amongst the rather luke-warm results of the top-stack Milan SKUs, one result that stands out more is the 32-core frequency optimised 75F3 SKU. Featuring only half the cores, the part still manages to easily compete amongst its 64 core siblings, showcasing 82% of the performance of a 7713. This has rather large implications for per-thread performance of this part which we’ll cover in a later page. 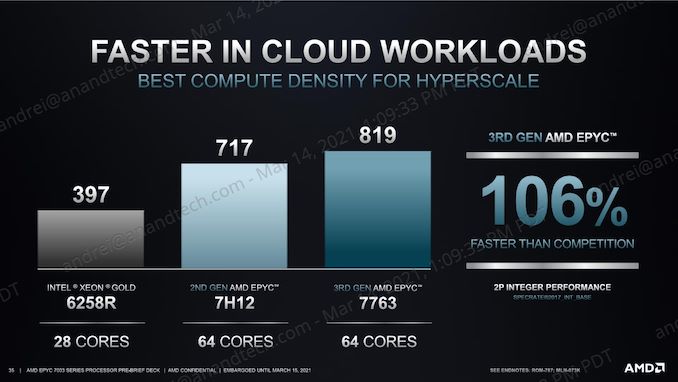 Although AMD’s presentation slides using totally different SPEC result numbers due to very different compiler and optimisation settings, the actual relative positioning we are getting in our internal results actually exceed that of what AMD is presenting, with the 7763 coming in with a +128% advantage over the Intel 8280, a part that’s performance equivalent to the 6258R. 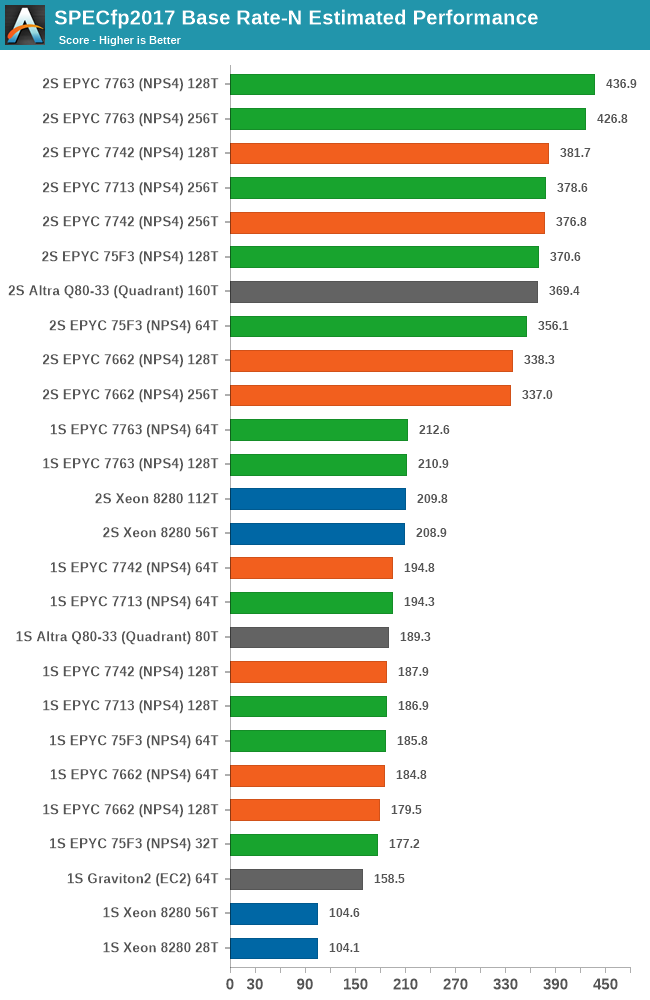 In the SPECfp2017 suite which is more representative of HPC workloads and has a focus more towards memory performance, AMD had always retained their performance leadership, and has now widened it with the new Milan generation. The 7763 performs 14.4% better than the Rome 7742, while the 7713 almost outperforms it by a margin of error. 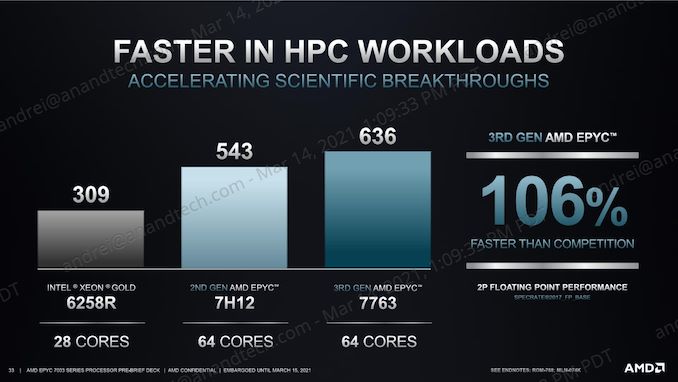 Against the competition and the figures AMD is showing, we’re measuring the 7763 outperforming the 8280 by 108% - near to the 106% the presentation material is showcasing. Intel should be able to make a larger leap with the next generation Ice Lake-SP server chips as the company moves from 6-channel to 8-channel memory, though we’ll have to see if that’s actually enough to catch up to AMD.