Just announced at CES in January, NVIDIA’s latest laptop graphics card lineup is now based on their latest generation Ampere platform, built on the 8 nm Samsung process. Razer is one of the first out of the gate to ship laptops with the new GPU.

When NVIDIA launched Pascal two generations ago, they were very happy to conclude that the laptop and desktop variants were similar enough in performance to drop the M badge (for Mobile) on the laptop-destined GPUs. Thanks to the low TDP and high efficiency of Pascal-based GPUs, performance was similar, even if the power output would be near the top of what a laptop could handle. NVIDIA also released Max-Q versions, which are the same basic GPU, binned a bit better, and run at a lower power limit. 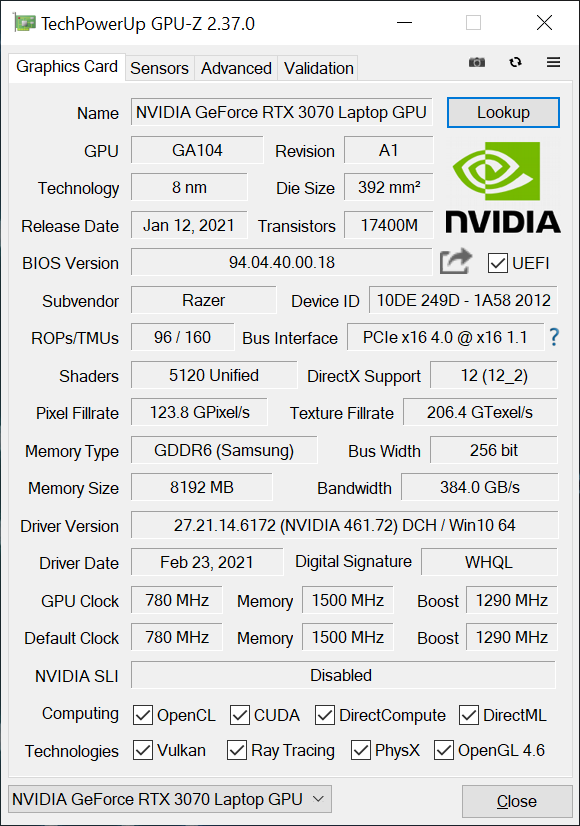 With the heat limitations of laptop chassis, matching performance of laptops and desktops is a tough proposition. With Ampere, it gets even harder, as the power limits for the higher-end parts have gone up dramatically – a RTX 3070 desktop GPU has a higher TDP than a RTX 2080, all the while laptop cooling is all but unchanged. So, for this generation, NVIDIA has gone back to explicitly designating their laptop GPUs – literally calling them "GeForce RTX 30[xx] Laptop GPU" –  indicating that the parts are destined for a thermally constrained environment. And, with less than half the TDP of the desktop cards, the performance of this generation of laptop parts is going to more widely diverge from the desktop than in past generations.

There are ways to combat this TDP discrepancy. The ridiculously parallel nature of graphics workloads means that NVIDIA would, in theory, be able to build wider GPUs, which run at a lower frequency, and don’t incur the exponential increase in power output with voltage. This is something they even did with the Pascal launch, with the RTX 1070 for laptops offering a few more CUDA cores than its desktop counterpart, but instead, the laptop GPUs offer far less CUDA cores than the desktop models.

The news is not all bad. Despite the Ampere-based laptop GPUs not being able to compete against their desktop counterparts, they are still a big upgrade over the RTX 20-series. Across the board, the new Ampere GPUs are about twice as wide as the outgoing models, and are based on the latest GPU architecture. It can easily get forgotten that while Ampere desktop parts reaped a good deal of their performance gains from increased power consumption, the laptop variants are still very much an upgrade over the outgoing RTX 20-series. 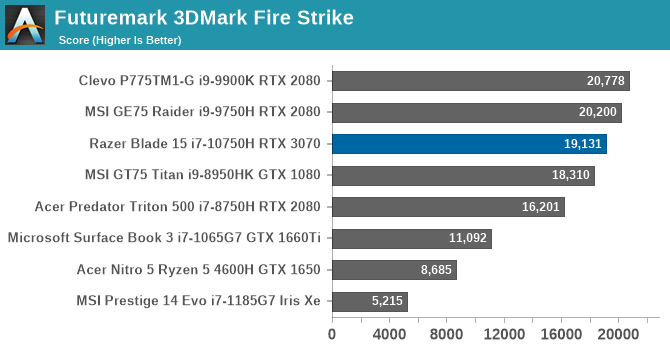 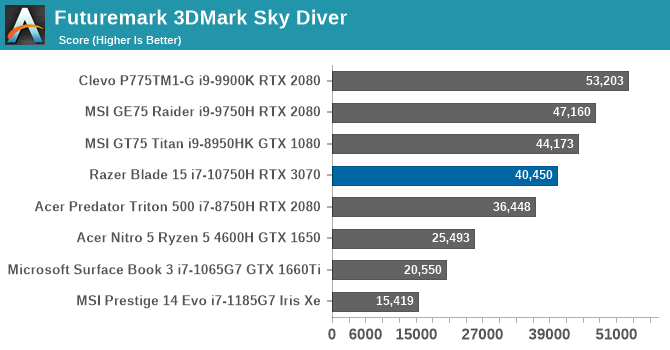 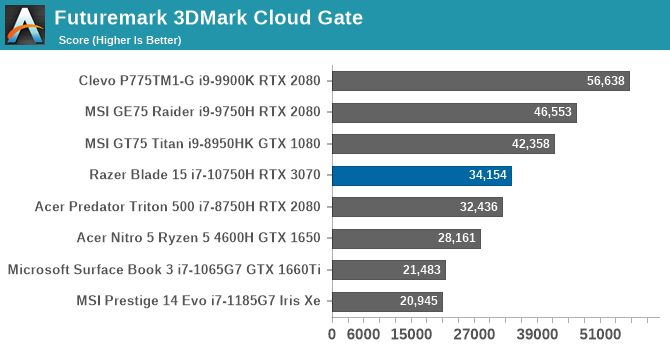 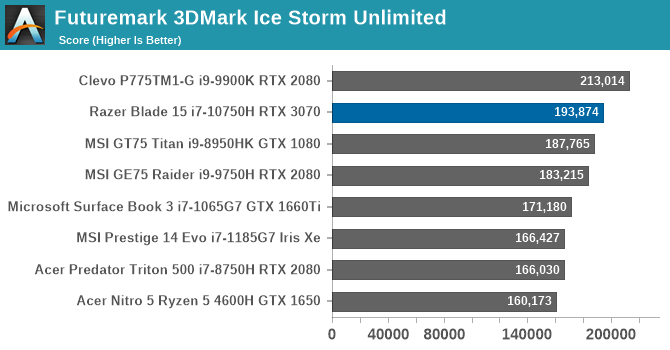 UL’s 3DMark suite offers a range of tests of varying complexity. The Razer Blade 15 with the RTX 3070 finished about mid-pack compared to some of the other gaming systems we’ve seen. Gaming systems can be thin and light designs like the Acer Predator Triton 500, and the Razer Blade series, or more of a desktop replacement such as the Clevo and MSI models shown here, which will have more headroom for thermals. The RTX 3070 paired with the Core i7-10750H seems to be able to be fairly close to the RTX 2080 models despite their higher thermal capacities. 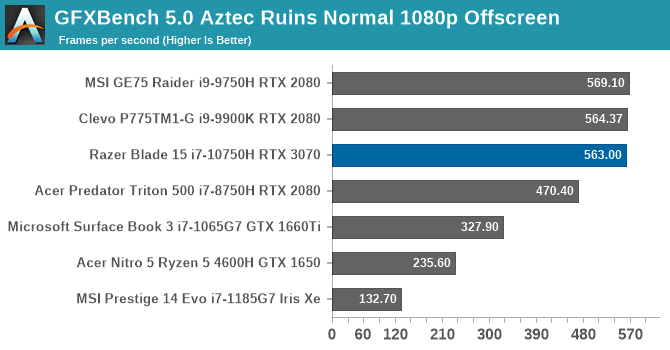 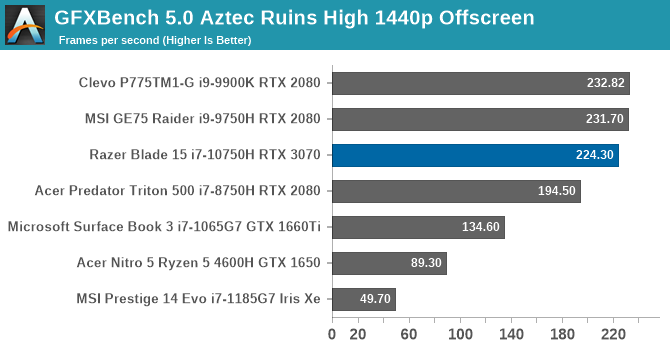 GFXBench added a DirectX 12 suite with the launch of version 5, and is cross-platform as well, although bit-wise the PC runs at 32-bit compared to 16-bit in the smartphone industry. In both tests, the RTX 3070, despite being in a thin and light design in the Razer Blade 15, was able to keep up with the RTX 2080 in much beefier laptops. 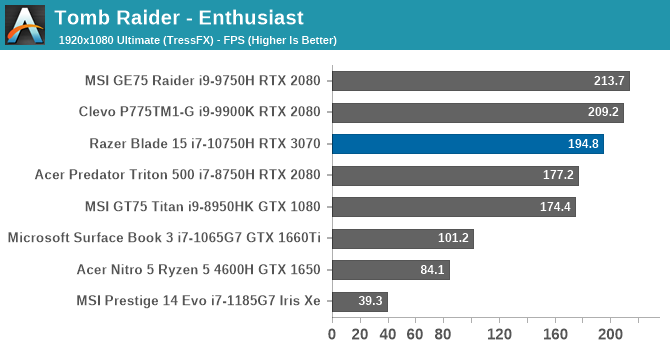 Although several years old now, the first game in the rebooted Tomb Raider franchise can still be demanding on laptops, but not with anything as powerful as this. Even at our maximum settings on 1920x1080, the laptop can easily out-pace its 165 Hz display refresh. Although we don’t normally test at 2560x1440 mostly due to most gaming laptops not supporting this resolution, the Razer Blade 15 would still hit 138 FPS average at the higher resolution. No issues here. 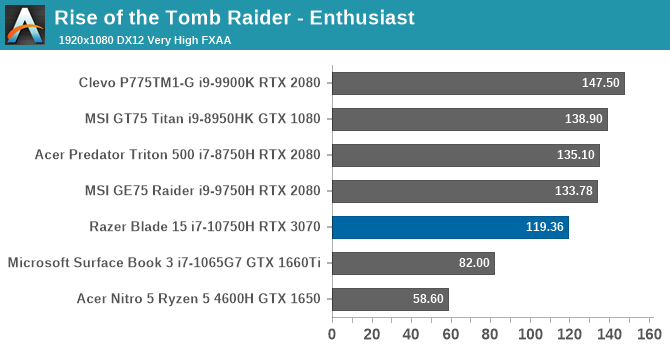 The second game in the series added DirectX 12, and was far more demanding on the graphics side. Here the Razer Blade 15 dips below all of the RTX 2080 laptops, although still can easily handle this game. At the native QHD resolution, the Razer Blade still managed 94 FPS average. 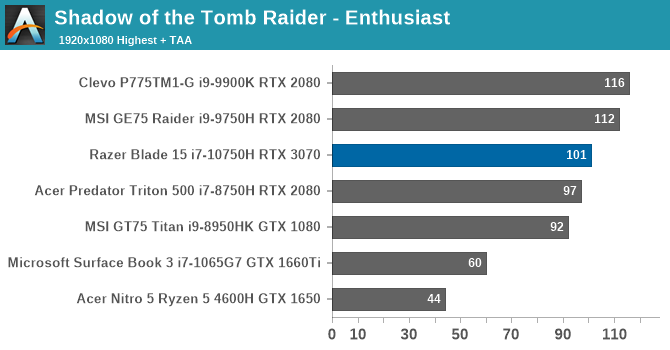 The most current game in the franchise is even more demanding, but whether due to drivers, or the new Ampere platform, the RTX 3070 is able to slot in again with the RTX 2080 slightly behind in Max-Q guise, and slightly ahead in the larger form factor gaming laptops. What is holding it back the most though is the CPU at this resolution, with the benchmark being GPU bound only 28% of the time. Bumping it up to QHD changes that to 82% GPU bound, with an average framerate of 79 FPS. 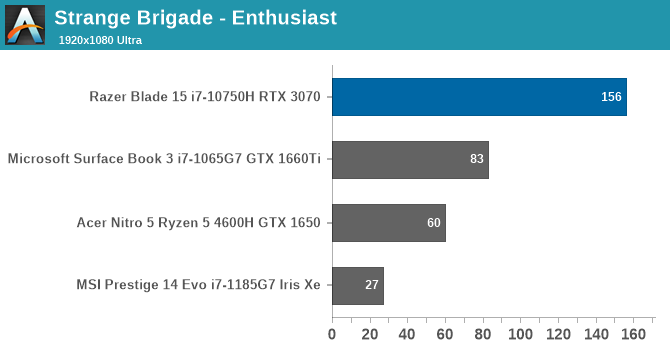 Another DirectX 12 game in the suite is Strange Brigade, set in ancient Egypt. This is one of the newest games in the suite, so we have the least amount of data for it. It is not the most demanding game, with the Razer Blade hitting 118 FPS even at QHD resolution. 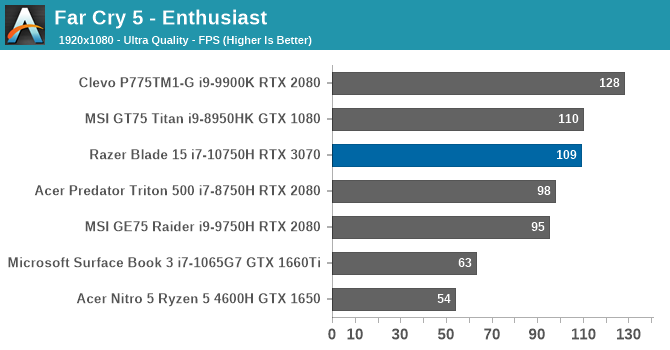 Ubisoft’s Far Cry franchise is one of their most successful, and even though there is a new Red Dawn version of this game, it is based on the same engine. Far Cry can also be somewhat CPU bound, which shows why the Clevo with its desktop processor is so far ahead, but the Razer Blade still does very well here, outperforming several RTX 2080 laptops. At QHD, the framerate only dips to 91 FPS average, showcasing again that this game is very much CPU limited. 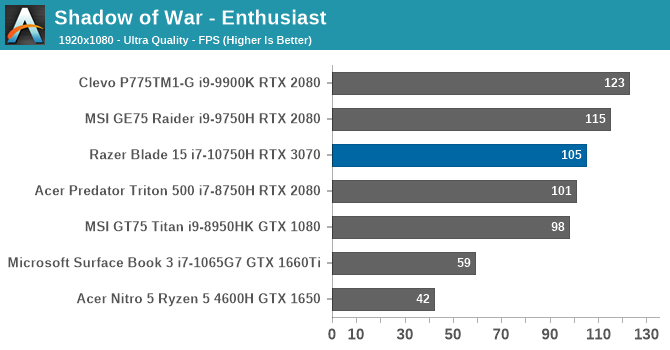 The results in Shadow of War are very familiar, with the Razer Blade 15’s RTX 3070 really in the mix with the RTX 2080 laptops from a year ago. At QHD, the framerate dropped to a very playable 78 FPS average.

Officially the NVIDIA naming scheme for the latest generation of Ampere GPUs bound for notebook computing is the RTX 30-Series Laptop GPUs. After a couple of generations of NVIDIA dropping the extra branding on their laptop GPUs, the difference in power requirements are just too large to ignore. Even with Pascal and Turing, desktop cards would always outperform their laptop brethren, but for Ampere NVIDIA has switched back to explicit laptop designations as the resulting performance is too far apart to be bundled together.

That being said, the RTX 3070 has shown itself to be very capable, mixing it up with the bigger, more expensive RTX 2080 from last generation. The Razer Blade Base model we are testing is also somewhat held back with the Core i7-10750H, as most of the time we are sampled the very top spec. It is kind of refreshing for Razer to offer the Base model, as it does highlight the differences. Although the less-expensive Razer Blade 15 Base model is a thin and light design, and although it does not offer the biggest, fastest CPU, the hex-core i7 and RTX 3070 are still a great combo, and fit the laptop very well.

Razer’s inclusion of a QHD display in the review unit seems to be the perfect fit for this combo as well, and although the Advanced model also offers a 1080p unit with an even higher refresh rate, the RTX 3070 Laptop GPU feels like it is a perfect fit with a high-refresh QHD panel. Even at the native resolution, framerates are more than acceptable.