"Threads" is a popular discussed subject. Therefore, we like to give a small introduction to those of you who are not familiar with threads. To understand threads, you first must understand processes. Any decent OS controls the memory allocation to the different programs or processes. A process gets its own private, virtual address space in memory from the OS. Thus, a process cannot communicate/exchange data with other processes without the help of the kernel, the heart of the OS that controls everything. Processes can split up in threads, parallel tasks that share the virtual address space, which can exchange data very quickly without intervention of the OS (global, static, and instance fields, etc.).

The thread is the entity to which the modern operating system (Windows NT based, Solaris, Linux) assigns CPU time. While you could split a CPU intensive program in processes (modern OS sees it as 1 process consisting of one thread), threads of the same process have much less overhead and synchronize data much quicker. The operating system assigns CPU time to running threads based on their priority. Performance gains of multi-CPU or multi-core CPU configurations are only high if: You have more than one CPU intensive thread; The threads are balanced - there is not one very intensive and a few others that are hardly CPU intensive; Synchronization between threads (shared data) either happens quickly, thanks to fast interconnects, or little synchronization is necessary; The OS provides well-tuned load-balanced scheduling; The threads are cache friendly (memory latency!) and do not push the memory bandwidth to the limits. In that case, you may typically expect a 70% to 99% performance speed-up, thanks to the second core. Be warned that Intel was already showing performance increases, which are not realistic "up to 124%". [1] 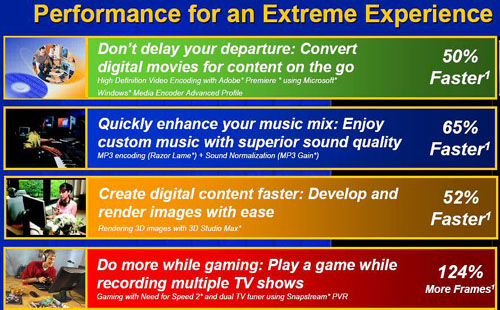 The benchmarks compare a Pentium 4 EE 840, a Dual Core Pentium 4 3.2 GHz (1 MB L2), to a 3.73 GHz Pentium 4 EE with 2 MB L2. Especially in the last benchmark, a game running in foreground with two PVR (Personal Video Recorders), and tuners running in the background gives a very weird result. How can a slower Dual core be more than 100% faster than a single core with a higher clock speed, bigger caches and a faster FSB? When we first asked Intel, they pointed to the platform (newer chipset, etc.), but no new chipset can make up for a 33 % slower FSB.

We suspected that different thread priorities (giving the game thread a higher priority) might have been the explanation, but Intel's engineers had another interesting explanation. They pointed out that the Windows scheduler can sometimes be inefficient when running many heavy tasks on a single CPU and might have given the game less CPU time than normal. The Windows scheduler didn't have that problem when two CPUs were present: less context switching between threads, and no reason to give the game not enough CPU time. Prepare for a load of hard-to-interprete benchmarks on the Internet...

Programming in Threads brings many advantages, especially on dual-cores. Threads with long running CPU intensive processing are not able to the give the system a sluggish unresponsive feeling when you want you do something else at the same time. The OS scheduler should take care of that as long as the CPU is fast enough, but the Intel benchmarks above show you that that is only true in theory. Dual and multi-core can definitely help here. Threads make a system more responsive and offer a very nice performance boost on multi-CPU systems. But the other side of the medal is complexity. Running separate tasks in separate threads that do not need to share data is the easiest part of making a program more suitable to multi-core CPUs. But that has been done a long time ago, and the real challenge is to handle threads that have to share data. The programmer also has to watch over the fact that high amounts of threads introduce overhead in the form of (unnecessary) context switches even on dual core CPUs.

A nasty problem that might pop-up is a "deadlock", when two threads are each waiting for the other to complete, resulting in neither thread ever completing. A race between two threads might sound speedier, but it means that the result of a program's operation depends on which of two or more threads completes first. The problem becomes exponentionally worse if more and more threads are able to run into these problems. Both the Java and .Net ("Threadpool") platform provide classes and tools to deal with thread management - programmers are not left on their own. The problem is not creating threads, but debugging the multithreaded programs. The result is that multithreading has been used sparingly and with as few threads as possible to keep complexity down. But the right tools are coming, right?

Intel does provide a few interesting tools for multithreading.

OpenMP is the industry standard for "portable" multi-threaded application development, and can do fine grain (loop level) and large grain (function level) threading.

The newest Intel compilers are even capable of Auto-Parallelization. That sounds fantastic - would multithreading be as easy as using the right compiler? After all, Intel's compiler is able to vectorize existing FP code too. Just recompile your FP intensive code with the right compiler flags and you get speed-ups of 100% and more as the Intel compiler is able to replace x87 instructions by faster SSE-2 alternatives.

Let us see what Intel says about auto-parallelization:


"Improve application performance on multiprocessor systems using auto-parallelization for automatic threading of loops. This option detects parallel loops capable of being executed safely in parallel and automatically generates multi-threaded code. Automatic parallelization relieves the user from having to deal with the low-level details of iteration partitioning, data sharing, thread scheduling and synchronizations. It also provides the benefit of the performance available from multiprocessor systems and systems that support Hyper-Threading Technology."