One of the major highlights that AMD is promoting with the new Zen 3 core and Ryzen 5000 processors how the company has kept the same power and yet delivered both more frequency, more performance per MHz, and ultimately more performance, despite using the same TSMC N7 manufacturing process node. The updated efficiency of the core, assuming the design can scale in frequency and voltage, can naturally lead to those higher frequency numbers. One of AMD’s humps in competing against Intel of late has been, despite any IPC difference, the higher frequency of Intel’s 14nm process. With Zen 3, we are seeing AMD drive those higher numbers – and some numbers higher than on the box.

When AMD announced the top 16-core processor, the Ryzen 9 5950X, it gave a base frequency of 3400 MHz and a turbo frequency of 4900 MHz. This turbo value was so close to the ‘magic’ number of 5000 MHz, and would yield an additional angle for AMD in its marketing strategy and promotional toolkit. Ultimately scoring a 5000 MHz version comes down to binning – AMD would have detailed analysis of the chiplets it makes at TSMC, and it would see how many chiplets could hit this mark. The question then becomes if there would be enough to satisfy demand, or if those chiplets were better suited in higher efficiency future EPYC products where the margins are higher.

We have seen what happens when you launch a processor that can’t be built in the numbers required: Intel’s Core i9-10900K, at 5.3 GHz turbo, was a super high frequency but couldn’t be built enough to meet demand, and Intel launched the Core i9-10850K – an identical chip except now down to 5.1 GHz, which was an easier target to meet.

If you’ve read through this far in the review, you have already seen that we’re here quoting going above 5.0 GHz for the Ryzen 9 5950X. Despite having an official single core turbo of 4.9 GHz, the processor has an internal metric of ‘peak’ frequency assuming there is sufficient thermal and power headroom of 5025 MHz. This in effect should be its official turbo value. In combination with the default precision boost behavior, we saw a very regular and sustained 5050 MHz. 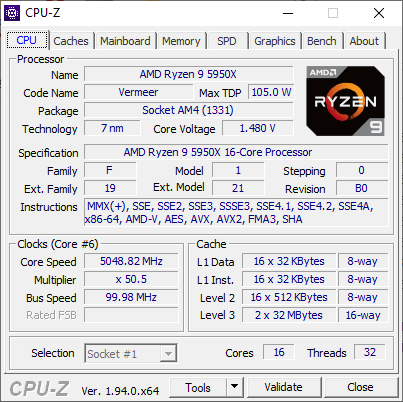 We quizzed AMD on this. We were told that the 4.9 GHz value for single core turbo should cover all situations, based on BIOS version, motherboard used, and the quality of the silicon inside. The company is happy to let the base precision boost algorithms (or what eXtreme Frequency Range/XFR was rolled into) enable something higher than 4.9 GHz if it can, and they confirmed that with a standard high-end AM4 built and this processor, 5025/5050 MHz should be easily achievable with a large proportion of 5950X retail hardware.

From the standpoint of ‘I’ve dealt with press relations from these companies for over 10 years’, I suspect the real answer for AMD not promoting 5.0 GHz is more about sculpting the holistic view of Zen 3 and Ryzen 5000.

If the company were to promote/place the Ryzen 9 5950X as AMD’s second ever processor to go above 5.0 GHz (the first was the FX-9590 back in 2013), or reaching 5.0 GHz on 7nm, then this achievement would necessarily overshadow all of AMD’s other achievements on Zen 3. Rather than pointing to the new core, the increased IPC, or the efficiency of the new processor, everyone would be pointing to the 5.0 GHz frequency instead. Achieving that value and promoting it as such effectively masks the ability for AMD (and the press) to be able to discuss some of the other major wins – that 5.0 GHz win would come off as a poisoned chalice. Not only this, but it might spur users to purchase them at a higher rate; you might consider this a win from both a revenue and gross margins perspective, but it does tie in to AMD’s ability to produce the chiplets at this frequency or if they want to use them for other higher margin products.

Of course, some of this is vanity. AMD would rather speak to its engineering expertise and successes, its teams of engineers, and dive into the specific performance wins, especially for a product where the claims about absolute performance leadership are in-of-themselves a strong statement. Users might conflate the fact that AMD reaching 5.0 GHz was the only reason for performance leadership, and that’s ultimately not the narrative that AMD wants to cultivate.

It also leaves the door open to a future product that will certainly say 5.0 GHz on the box. When AMD has extracted the marketing performance of its increased IPC and efficiency, it can open that window and reap another focused review cycle.

In short: effective marketing is a skill, especially when there are multiple angles that can be leveraged for promotional tools. Identifying how you layer those communications could drastically affect, multiply, or amplify product perception. In what order you execute those multiples and amplifications can make or break a product cycle.

From a member of the press’ perspective, the more I interact with communications teams, the more I understand how they think.

With all that being said we need an updated table showing our measured peak and all-core turbo frequencies for the Ryzen 5000 series. Going through each of the four processors, as part of our power testing we hoover up all the data for per-core power and per-core frequencies as we scale from idle to full-CPU load. Part of that data shows:

The main takeaway from this data, aside from those measured turbo values, is that one of AMD’s new Zen 3 cores can hit 4000 MHz in around 7 W, as indicated by the per core values on the 5950X and 5900X. For the future AMD Milan EPYC enterprise processors, this is vital information to see where exactly some of those processors will end up within any given power budget (such as 225 W or 280 W).

Also of note are the last two processors – both processors are reporting 4450 MHz all-core turbo frequency, however the 5800X is doing it with 14.55 W per core, but the 5600X can do it with only 10.20 W per core. In this instance, this seems that the voltage of the 5800X is a lot higher than the other processors, and this is forcing higher thermals – we were measuring 90ºC at full load after 30 seconds (compared to 73ºC on the 5600X or 64ºC on the 5950X), which might be stunting the frequency here. The motherboard might be over-egging the voltage a little here, going way above what is actually required for the core.

Moving back to the halo chip, we can compare the loaded Core Frequency scaling of the new Ryzen 9 5950X with Zen 3 cores against the previous generation Ryzen 9 3950X with Zen 2 cores. It looks a little something like this.

Note that the 3950X numbers are updated from our original 3950X review, given that there have been a wide variety of BIOS updates since. Both CPUs exhibit a quick drop off from single core loading, and between 3-8 core load it remains steady, with the new processor anywhere from 400-450 MHz higher. As we scale up beyond eight cores, the two parts actually converge at 14-core load, and when we sit at a full CPU, our Ryzen 9 5950X is 125 MHz lower than the 3950X.

Should we look much into this? The listed base frequency of the Ryzen 9 5950X is 100 MHz lower than the Ryzen 9 3950X (3400 MHz vs 3500 MHz), and we’re seeing a 125 MHz all-core difference. This has the potential to indicate that Zen3 has a higher current density when all the cores are active, and due to the characteristics of the silicon and the core design (such as the wider core and faster load/store), there has to be this frequency difference to maintain the power when all cores are loaded. Naturally the benefit of Zen 3 is that higher performance per core, which should easily go beyond the 125 MHz difference. The benchmarks over the next dozen pages will showcase this.