When it comes to instruction improvements, moving to a brand new ground-up core enables a lot more flexibility in how instructions are processed compared to just a core update. Aside from adding new security functionality, being able to rearchitect the decoder/micro-op cache, the execution units, and the number of execution units allows for a variety of new features and hopefully faster throughput.

As part of the microarchitecture deep-dive disclosures from AMD, we naturally get AMD’s messaging on the improvements in this area – we were told of the highlights, such as the improved FMAC and new AVX2/AVX256 expansions. There’s also Control-Flow Enforcement Technology (CET) which enables a shadow stack to protect against ret/ROP attacks. However after getting our hands on the chip, there’s a trove of improvements to dive through. 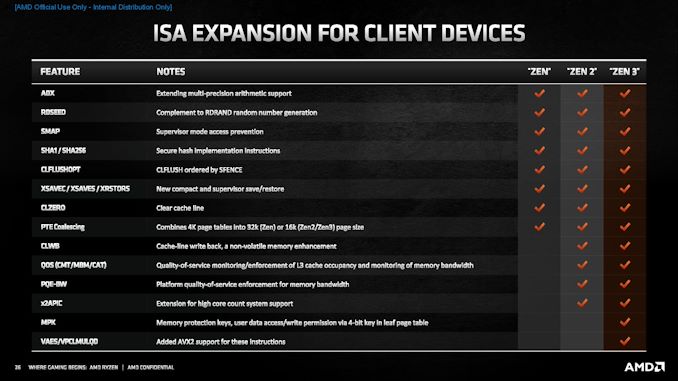 The top cover item is the improved Fused Multiply-Accumulate (FMA), which is a frequently used operation in a number of high-performance compute workloads as well as machine learning, neural networks, scientific compute and enterprise workloads.

This means that AMD’s FMAs are now on parity with Intel, however this update is going to be most used in AMD’s EPYC processors. As we scale up this improvement to the 64 cores of the current generation EPYC Rome, any compute-limited workload on Rome should be freed in Naples. Combine that with the larger L3 cache and improved load/store, some workloads should expect some good speed ups.

The other main update is with cryptography and cyphers. In Zen 2, vector-based AES and PCLMULQDQ operations were limited to AVX / 128-bit execution, whereas in Zen 3 they are upgraded to AVX2 / 256-bit execution.

AMD also mentioned to a certain extent that it has increased its ability to process repeated MOV instructions on short strings – what used to not be so good for short copies is now good for both small and large copies. We detected that the new core performs better REP MOV instruction elimination at the decode stage, leveraging the micro-op cache better.

Now here’s the stuff that AMD didn’t talk about.

Sticking with instruction elimination, a lot of instructions and zeroing idioms that Zen 2 used to decode but then skip execution are now detected and eliminated at the decode stage.

As for direct performance adjustments, we detected the following:

It’s worth highlighting those last two commands. Software that helps the prefetchers, due to how AMD has arranged the branch predictors, can now process three prefetch commands per cycle. The other element is the introduction of a hardware accelerator with parallel bits: latency is reduced 99% and throughput is up 250x. If anyone asks why we ever need extra transistors for modern CPUs, it’s for things like this.

There are also some regressions

As always, there are trade offs.

For anyone using older mathematics software, it might be riddled with a lot of x87 code. x87 was originally meant to be an extension of x86 for floating point operations, but based on other improvements to the instruction set, x87 is somewhat deprecated, and we often see regressed performance generation on generation.

But not on Zen 3. Among the regressions, we’re also seeing some improvements. Some.

The FADD and FMUL improvements mean the most here, but as stated, using x87 is not recommended. So why is it even mentioned here? The answer lies in older software. Software stacks built upon decades old Fortran still use these instructions, and more often than not in high performance math codes. Increasing throughput for the FADD/FMUL should provide a good speed up there.

There are a few others not FP specific.

These last three are important for SHA cryptography. AMD, unlike Intel, does accelerated SHA so being able to reduce multiple instructions to a single instruction to help increase throughput and utilization should push them even further ahead. Rather than going for hardware accelerated SHA256, Intel instead prefers to use its AVX-512 unit, which unfortunately is a lot more power hungry and less efficient.

We’ve already covered the improvements to the FMA latency, but there are also other improvements.

Along with these, store-to-load latencies have increased by a clock. AMD is promoting that it has improved store-to-load bandwidth with the new core, but that comes at additional latency.

Compared to some of the recent CPU launches, this is a lot of changes!