What has been true for a number of modern day microprocessors is that the vast majority of the CPU is made up of cache, take a look at the Athlon 64 FX with its 1MB L2 cache: 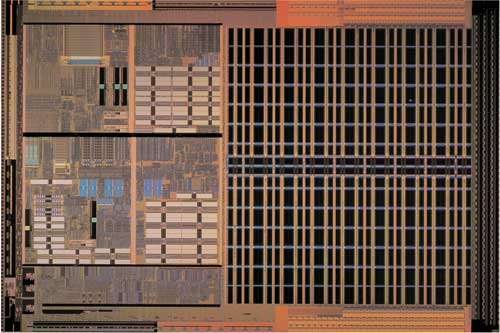 Over half of the die is L2 cache.

But when looking at the new Prescott 2M core the same can't be said: 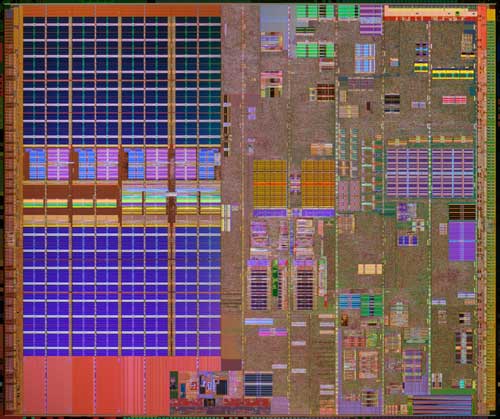 The split between logic and cache is almost 50/50, looking back at the original Prescott we see that the Prescott core itself actually occupied more die area than the cache: 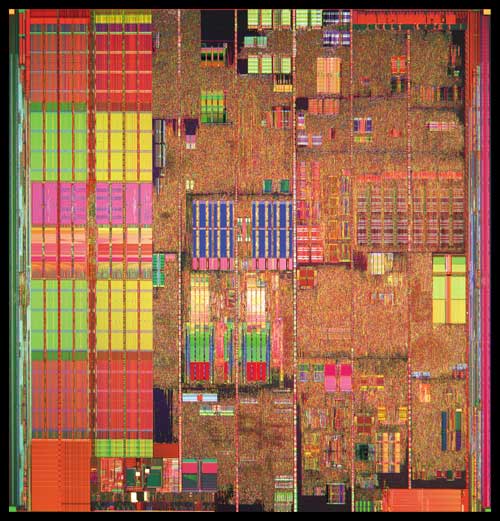 There are two explanations for the phenomenon, first with Prescott Intel introduced their highest density cache ever produced; at present day it holds the record for largest cache with the smallest area on a modern desktop microprocessor.  Secondly, is the fact that Prescott, with its 31 pipeline stages, 64-bit execution units and highly accurate branch predictors with massive branch history tables, is simply a big, complex core.  Also remember that the Athlon 64 is basically a reworked K7 core, with wider execution units and datapaths, as well as an on-die memory controller, so it is understandably simpler.

Let's compare that to the Pentium M: 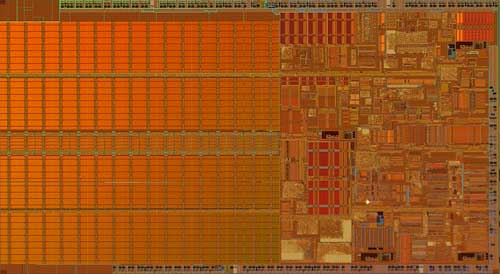 The PowerPC 970 (used in Apple's G5 systems) looks a bit more Prescott like, but remember we're only dealing with a 512KB L2 cache here: 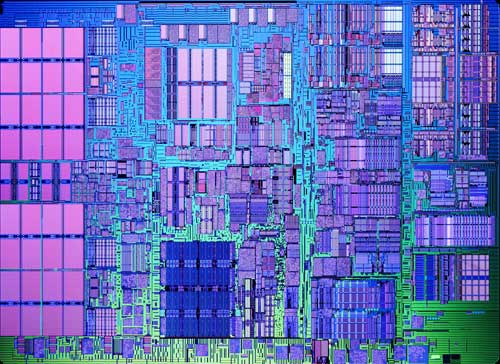 Or, even more interestingly, compare it to the newly announced Cell processor: 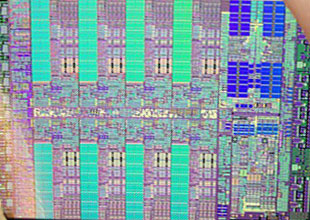 IBM/Sony/Toshiba Cell microprocessor (we apologize for the quality of the die shot, it's the best we could find)

Looking at Cell is quite interesting because it appears to be just as complex as Prescott, but remember that with Cell we're looking at 9 individual processors.  But more on that next week...

Extreme Edition - Not so "Extreme" Anymore

We looked at the impact of the 1066MHz FSB in the past and quickly found that it didn't do much for the EE.  Although we're now running at 3.73GHz for the Pentium 4 Extreme Edition, the benefit from the 1066MHz FSB is still pretty limited.

But the price?  The 3.73 EE will retail for $999, the Pentium 4 660: $605.  The Extreme Edition was never a good value, but in the case of the new chip, it's basically throwing money away.  Let the benchmarks speak for themselves, but your best bet is to wait for the next generation of Extreme Edition CPUs, either with a 4MB L2 cache or the dual core offerings.