Battery life of the new iPhone 12 series has been quite controversial. This is due to a couple of reasons, but primarily due to the fact that Apple has reduced the actual capacities of the batteries this generation. The new iPhone 12 and 12 Pro come with a very conservative 2815mAh unit, which is less than the 11 Pro’s 3046mAh or the 11’s 3110mAh capacity. It’s extremely unusual to see battery capacities regress like this, particularly in a time where the Android competition routinely use +4000mAh batteries. Apple does have a huge SoC efficiency advantage, but that only goes so far to bridge the battery capacity deficiency for the new iPhones.

Another controversial aspect is the 5G connectivity of the new devices. This generation, Apple made the move back to using Qualcomm modems as Intel seemingly wasn’t able to supply them with a satisfactory 5G option. Last year, Apple had purchased Intel’s modem division for $1B, but it’s likely we’ll have to wait a bit more to see the vertical integration of that acquisition.

iPhones in the US are the only models which also feature mmWave connectivity, as the rest of the world “only” gets sub-6GHz variants. Unfortunately the models I have for review here are European and mmWave isn’t an option, and I also don’t yet have any sub-6GHz 5G coverage in my area yet, and as such, I can’t really comment much on the cellular battery life of the new phones. 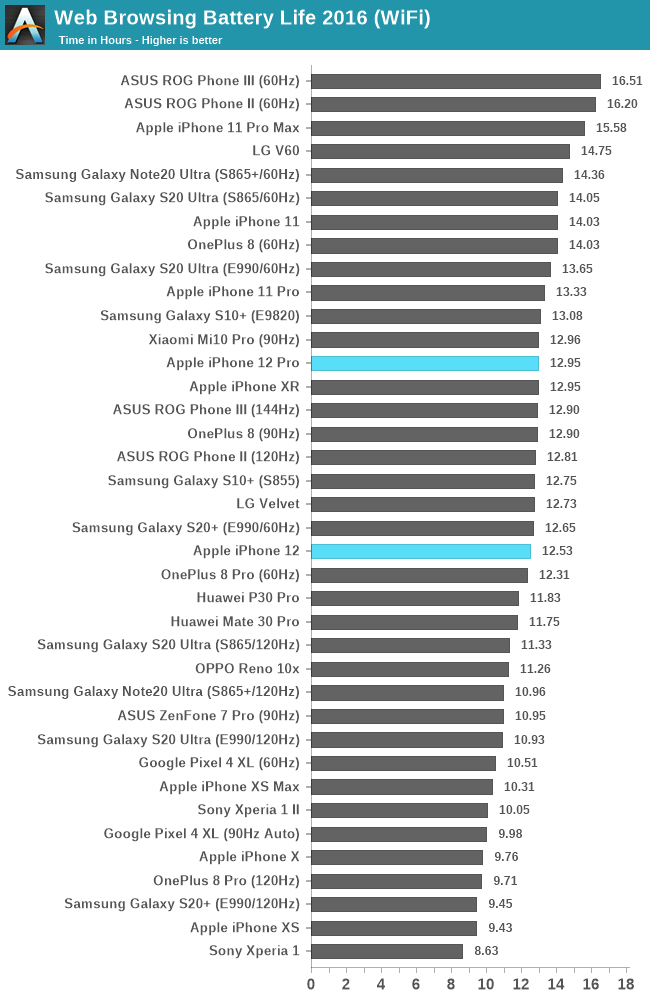 That being said, in our regular Wi-Fi web browser test, we’re seeing very good results for both the iPhone 12 and 12 Pro. Although the 12 Pro has a 7.5% smaller battery and a larger screen than the 11 Pro, it lasted only 3% less than its predecessor, meaning that the SoC and display power efficiency gains this generations were enough to mostly counteract the smaller battery.

The iPhone 12 lasted 11% less than the iPhone 11, but that was quite expected given the 10% smaller battery and also the move from a low-resolution LCD to a higher resolution OLED panel. At 12.53h it’s still an absolute excellent result.

Apple’s decision to stick with 60Hz panels this generation, while not great in terms of fluidity of animations compared to other competitor devices, at least made a lot of sense for the battery life of the phones. 120Hz really only makes sense on the newer Note20 Ultra with its new “HOP” panel, but even that has some quirks here and there. I expect the iPhone 13 generation to finally embrace higher refresh-rate displays, once all the power efficiency concerns have been fully resolved.

Overall, the new iPhone 12’s battery longevity looks to be in line with last generation’s devices, especially comparing 11 Pro vs the new 12 Pro. While 5G remains a wildcard, especially for US users which are on mmWave carriers, it’s always something you can disable, even though that’s a suboptimal option to resort to.