The Sabrent Rocket Q claims support for the full range of NVMe power and thermal management features. However, the table of power states includes frighteningly high maximum power draw numbers for the active power states—over 17 W is really pushing it for a M.2 drive. Fortunately, we never measured consumption getting that high. The idle power states look typical, including the promise of quick transitions in and out of idle.

We report three idle power measurements. Active idle is representative of a typical desktop, where none of the advanced PCIe link power saving features are enabled and the drive is immediately ready to process new commands. Our Desktop Idle number represents what can usually be expected from a desktop system that is configured to enable SATA link power management, PCIe ASPM and NVMe APST, but where the lowest PCIe L1.2 link power states are not available. The Laptop Idle number represents the maximum power savings possible with all the NVMe and PCIe power management features in use—usually the default for a battery-powered system but not always achievable on a desktop even after changing BIOS and OS settings. Since we don't have a way to enable SATA DevSleep on any of our testbeds, SATA drives are omitted from the Laptop Idle charts.

Note: Last year we upgraded our power measurement equipment and switched to measuring idle power on our Coffee Lake desktop, our first SSD testbed to have fully-functional PCIe power management. The below measurements are not a perfect match for the older measurements in our reviews from before that switch.

The Samsung 870 QVO SSDs have lower active idle power consumption than the NVMe competition, though our measurements of the 4TB model did catch it while it was still doing some background work. With SATA link power management enabled the 8TB 870 QVO draws more power than the smaller models, but is still very reasonable.

The Sabrent Rocket Q's idle power numbers are all decent but not surprising. The desktop idle power draw is significantly higher than the 49mW the drive claims for power state 3, but it's still only at 87mW which is not a problem. 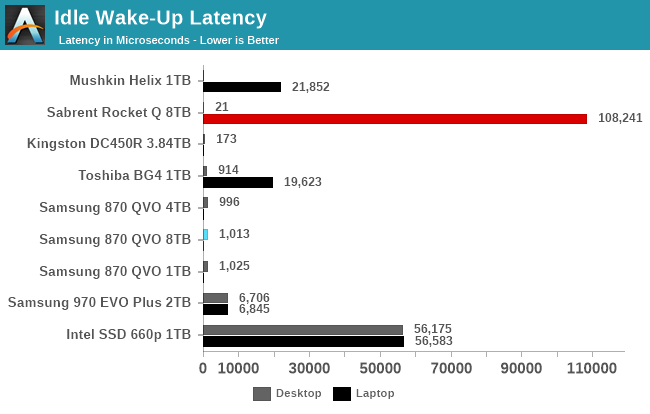 The Samsung 870 QVO takes 1ms to wake up from sleep. The Sabrent Rocket Q has almost no measurable wake-up latency from the intermediate desktop idle state, but takes a remarkably long 108ms to wake up from the deepest sleep state. This is one of the slowest wake-up times we've measured from a NVMe drive and considerably worse than the 25ms latency the drive itself promises to the OS.