For this segment, we’re covering two motherboards: the ASRock B550 Phantom Gaming 4, and the ASRock B550 Phantom Gaming 4ac. The difference between the two, you would think given the name, is that the AC model has Wi-Fi 5 installed. There is another subtle difference, in that the standard PG4 has six SATA ports, whereas the PG4ac model only has four. This is despite both models still having the same PCIe layout, so we’re unsure why there is a difference. Nonetheless the rest of the boards are the same.

As we move to the cheaper end of the B550 range, we move to the motherboards that do not have rear-IO covers, and more limited power delivery and chipset cooling. Despite the PG4 box being red, the board itself is a lot more silver, playing into the Phantom Gaming theme, but with fewer heatsinks there is less to actually cover. For the power delivery here, for example, there is a single heatsink on the left hand side where all six phases for the CPU are. The chipset heatsink is a lot smaller, and neither of the M.2 slots have heatsinks either. 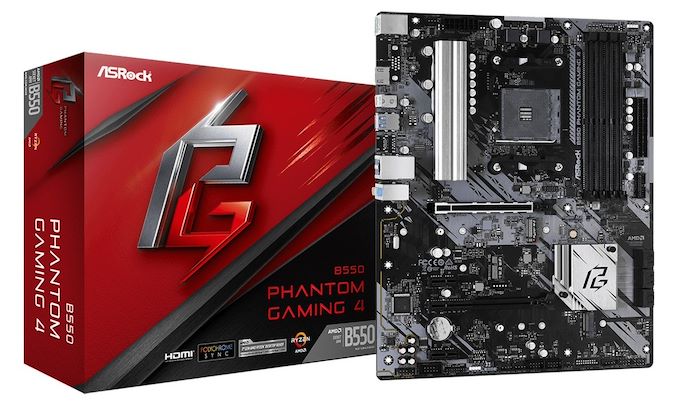 The CPU is powered by an 8-pin and a 4-pin, and the socket area has easy access to three 4-pin fan headers as needed. The motherboard still has a full complement of DDR4 slots, and these are single sided latch variants.

On the right hand side of the motherboard there is a USB 3.0 header, SATA ports, but no power/reset buttons. On the bottom there is an audio header, a COM header, a TPM header, RGB LED headers, three more 4-pin fan headers, two USB 2.0 headers, and a front panel header. 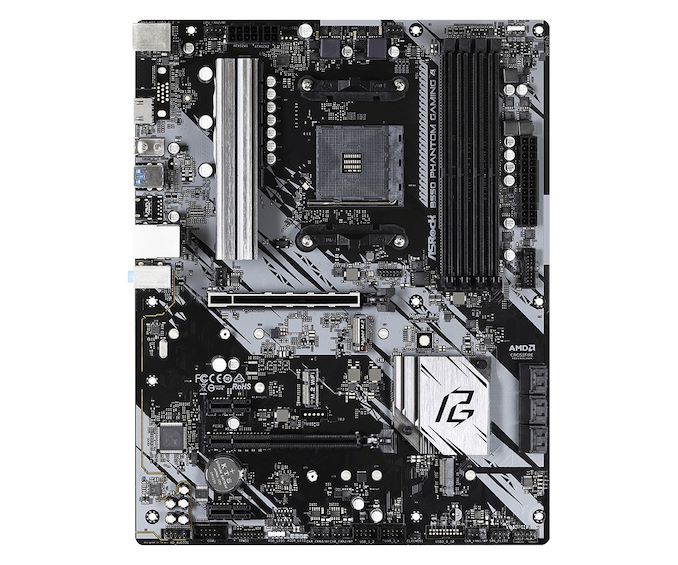 The PCIe layout puts a full PCIe 4.0 x16 slot at the top with additional reinforcement, directly above the PCIe 4.0 x4 M.2 slot for storage. There is an M.2 Wi-Fi slot underneath this, which with the PG4ac is filled with an Intel AC3168 1x1 solution, one of the cheapest 802.11ac modules you can get. There is a full length PCIe 3.0 x4 slot from the chipset, and underneath this is another M.2 slot, this time PCIe 3.0 x2 from the chipset.

The audio section on the right hand side is using an upgraded ALC1200 audio codec, with PCB separation and filter caps. Unlike the other ALC1200 variants we’ve seen from ASRock, this board only has three audio outputs.

On the rear panel we have a combination PS/2 port, six USB 3.2 Gen 1 ports, a HDMI output, and a single Realtek RTL8111H gigabit Ethernet port. There are no USB 3.2 Gen 2 ports on this motherboard.