In regards to product stack size, MSI has quite a varied range of B550 models set for launch, with many of its series making a reappearance. This includes the Gaming Carbon with a premium controller set for a budget-focused chipset, and the Unify series known for its sleek all-black aesthetic makes its B series debut. Quite a few of MSI's models include 2.5 GbE Ethernet controllers, more so than it did with its X570 models, and makes it for a competitive selection for users to choose from.

Focusing on its premium B550 model, the MSI MPG B550 Gaming Carbon Wifi, it's very similar in design to the X570 Gaming Pro Carbon. Underneath the carbon inspired heatsinks is an advertised 12+2 power delivery, with dual 12 V ATX CPU power inputs including an 8-pin and 4-pin pairing. The most notable features include support for DDR4-5100 memory, dual M.2 slots, a Realtek ALC1200 HD audio codec and a Realtek 2.5 GbE Ethernet controller. 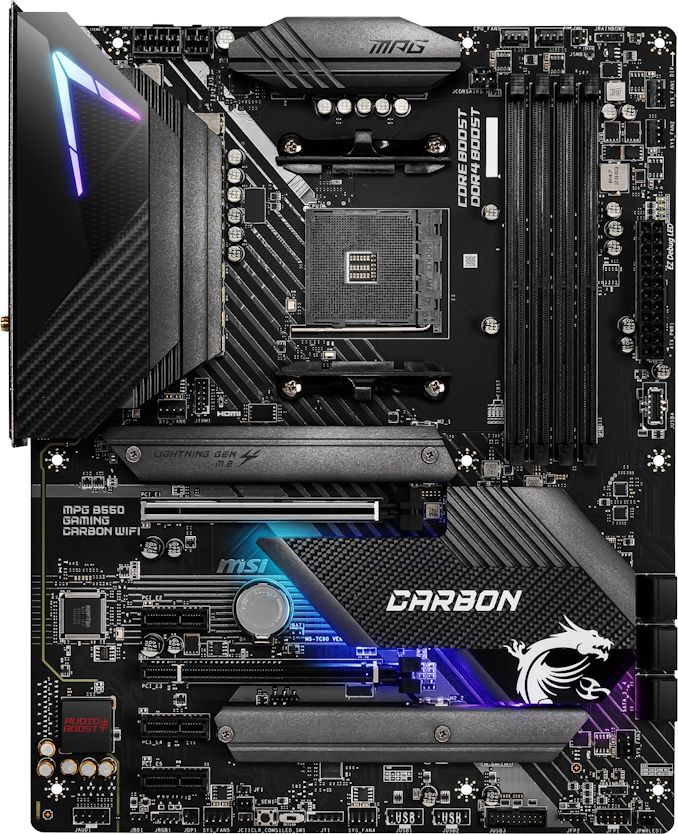 Looking at PCIe support, the B550 Gaming Carbon Wifi includes two full-length slots including a PCIe 4.0 x16 and PCIe 3.0 x4 slot, with three additional PCIe 3.0 x1 slots. MSI includes four memory slots with support for up to DDR4-5100, with a combined total of up to 128 GB. For storage, there are two M.2 slots with the top slot supporting up to PCIe 4.0 x4 drives, while the second slot which is driven by the chipset and as a consequence, is limited to PCIe 3.0 x4. This is in additional six SATA ports with support for RAID 0, 1, and 10 arrays. MSI has included support for up to DDR4-5100 memory, with a combined total of up to 128 GB across four memory slots.

On the rear panel is a whole host of connectivity real estate which includes a single USB 3.2 G2 Type-C, one USB 3.2 G2 Type-A, two USB 3.2 G1 Type-A, and four USB 2.0 ports. A pair of video outputs including a DisplayPort and HDMI output, although MSI doesn't go into detail on the specifications. In regards to networking, the board is equipped with a Realtek RTL8125B 2.5 GbE Ethernet controller and an Intel AX200 Wi-Fi 6 interface which also includes support for BT 5.0 devices. Also on the rear panel is a handily located BIOS Flashback button, with the board five 3.5 mm audio jacks and S/PDIF optical output which are controlled by a Realtek ALC1200 HD audio codec.

The MSI MPG B550 Gaming Carbon Wifi directly replaces the previous B450 Gaming Carbon Max Wifi and has an MSRP of $220. This makes it the most expensive of MSI's B550 models and it looks to come with a solid design, 2.5 GbE Ethernet and Wi-Fi wireless networking. MSI has stuck to a design it knows and implements it all on a solid looking board if RGB enabled carbon inspired styling is the desired theme.