Sitting at the bottom of GIGABYTE's B550 product stack is the B550M DS3H, which is one of just a handful of micro-ATX sized models to choose from. Aimed specifically at the sub $100 market, the B550M DS3H includes support for DDR4-4733 memory, dual M.2 slots and a Realtek Ethernet and audio codec pairing. 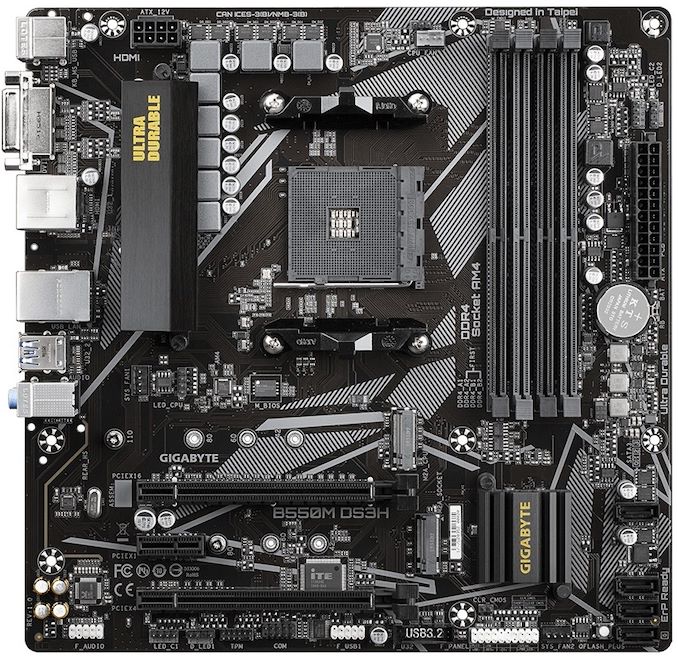 The GIGABYTE B550M DS3H has perhaps one of the funkiest black and grey patterned PCBs from GIGABYTE, with small black heatsinks that feature gold text for contrast. Included is a full-length PCIe 4.0 x16 slot, with another full-length PCIe 3.0 x4 slot, and a single PCIe 3.0 x1 slot. There are four memory slots with support for up to DDR4-4733, and up to a maximum capacity of 128 GB across four available memory slots. For storage is a pair of PCIe M.2 slots, one PCIe 4.0 x4 and the other PCIe 3.0 x4, with four SATA ports with support for RAID 0, 1, and 10 arrays.

Included on the rear panel is the bare necessities to what an entry-level board should include, with four USB 3.2 G1 Type-A, and four USB 2.0 ports. For users looking to utilize an AMD Ryzen APU, GIGABYTE has included a pair of video outputs consisting of a DVI-D port, as well as an HDMI output, with a PS/2 keyboard and mouse combo port for legacy devices. A single Realtek Gigabit Ethernet controller powers the RJ45 port, while a Realtek ALC887 HD audio codec drives the board's three 3.5 mm audio jacks.

The B550M DS3H has an MSRP of $94 which sets it as the cheapest GIGABYTE B550 model at launch. With its budget controller set including a Realtek Gigabit Ethernet controller and Realtek ALC887, it has all the basics needed for a low-end and entry-level system. It has no Type-C or USB 3.2 G2 connectivity, but that's acceptable for a board in the sub $100 market space.