One of the trends that motherboard makers are going to have to get in the mood for is putting which brand of Wi-Fi is being used on their Wi-Fi enabled boards. Some vendors still call their hardware AC or AX, which is an easy identification, but because we are in a situation where there’s a mix of Wi-Fi 5 and Wi-Fi 6 modules out there, we should be asking for clarity within the product name. For the ASUS Prime B550M-A Wi-Fi, the added cost of the Wi-Fi 6 module comes to +$15 over the base version, and aside from the Wi-Fi model only supporting HDMI 2.0 rather than 2.1 on the non-Wi-Fi model, the two are identical. 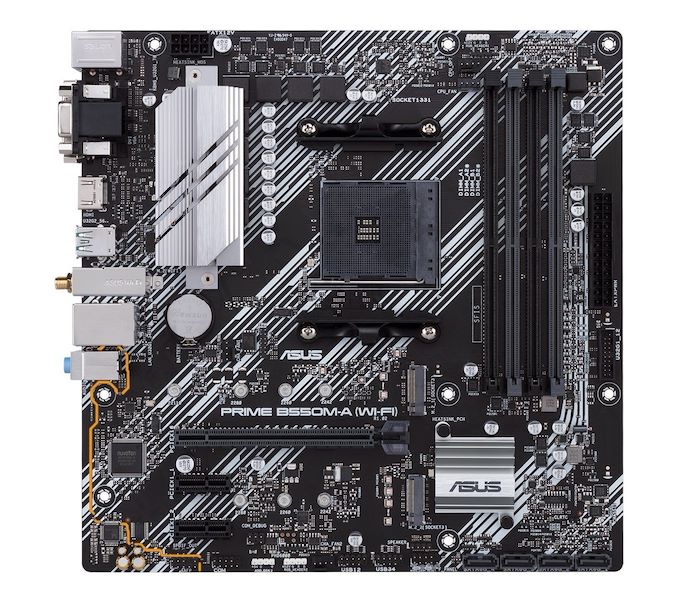 The board uses the similar white stripes as the Prime B550-Plus, although this is a smaller cost down model, so we get smaller heatsinks and a few different design features here. The CPU has an 8-pin power connector to the top left, and the socket has access to three 4-pin fan headers within easy reach. Above the two fan headers above the socket is an RGB header. On the right hand side of the motherboard there are four memory slots, with single side latches, along with a 24-pin ATX connector and a USB 3.0 header. Like the Prime B550-Plus, the SATA ports are located on the bottom of the board.

On the far left, the audio subsystem is a slightly upgraded ALC887 arrangement, and along the bottom of the board we have a COM header, more RGB LED headers, another 4-pin fan header, two USB headers, and the SATA ports. 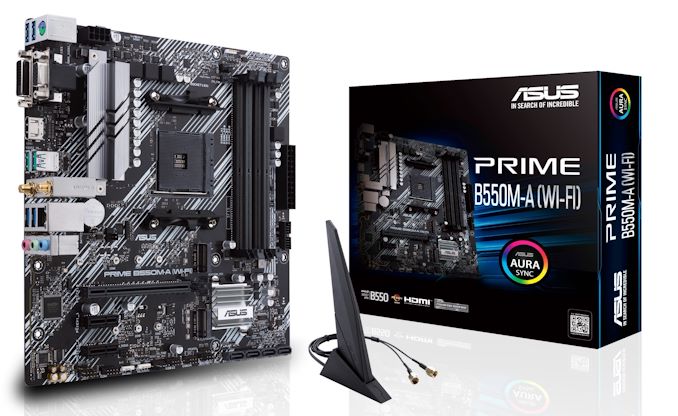