The B550-F Gaming is a cheaper variant of the B550-E Gaming – significantly cheaper in fact, almost $90 if we consider the non-Wi-Fi version of the B550-F ($190). For that cost difference, the PCIe configuration is a simple PCIe 4.0 x16 rather than a bifurcated design, we lose a USB 3.2 Gen 2 port on the rear panel, and it uses 12 phases for the CPU rather than 14. There’s still the same 2.5 gigabit Ethernet, still the same SupremeFX audio with dual amps. It just goes to show how much adding bifurcation to the B550-E ($280) ends up on the final cost of the board. 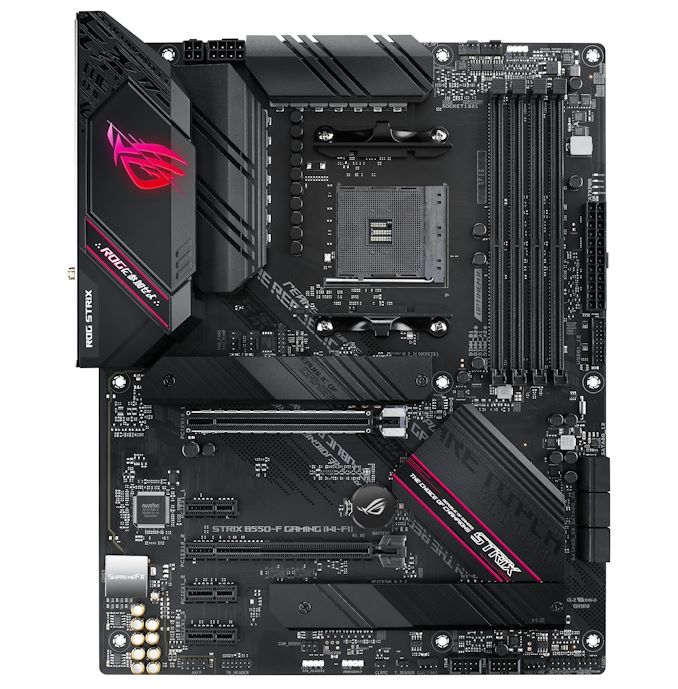 As mentioned, this board has a 12+2 phase design, with the power delivery heatsinks coming in two parts without a connecting heatpipe. The heatsink on the left is part of the rear panel cover, which has additional LEDs inside. The CPU is powered through an 8-pin and 4-pin, and the socket has four 4-pin fan headers within easy reach.

The board uses single sided latch memory slots, and to the right of these we get the 24-pin ATX power connector and the USB 3.0 header. Below this is a set of 6 SATA ports.

The audio on the board is ASUS’ custom S1200A audio codec, with SupremeFX trimmings and dual amps. Along the bottom of the board we have a Thunderbolt header, two RGB LED headers, a Clear CMOS header, a thermocouple header, two 4-pin fan headers, and two USB 2.0 headers.