Out of ASUS’ three main sub-brands for B550, the Strix is aimed at the higher end, and we get a range of options to play with. The B550-E Gaming is the more expensive of the bunch, at $280, although it is one of the few boards to offer x8/x8 functionality with its PCIe slots. The use of this configuration isn’t so much for gaming (despite the name), due to lack of SLI support, but it does enable a good setup for a machine based around GPU compute or add-in cards, like RAID cards, or additional PCIe x4 NVMe drives. 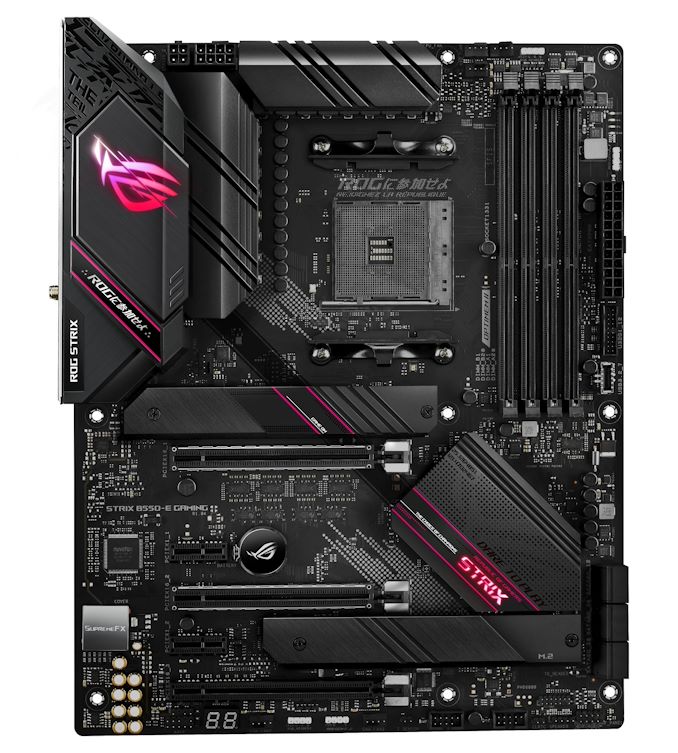 ASUS’ design philosophy this time around involves a similar corner to corner 45-degree line scheme to a lot of other different brands, however in parts ASUS pushes this to a more dot-matrix style design. We still get that ROG font on all the words though.

For features, the B550-E Gaming has a large rear panel cover that covers only the rear panel rather than the full audio section, and this covers over the heatsink for the power delivery. There are two heatsinks here, like most boards with high-end power delivery, but there does not seem to be a heatpipe between them for this board. 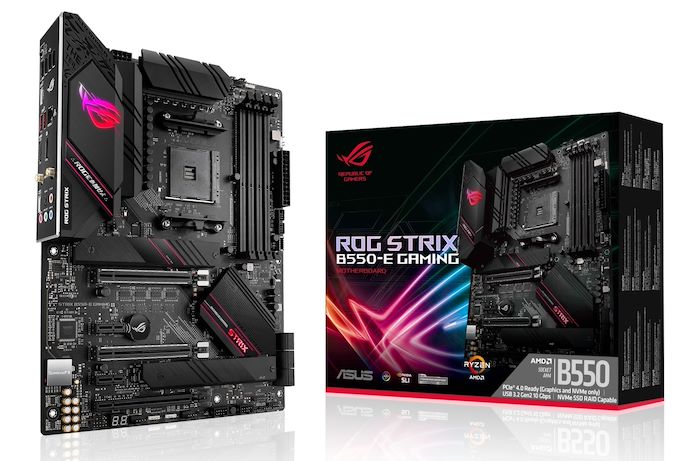 The socket area has access to four 4-pin fan headers within easy reach, three of which are just above and to the right of the socket. The CPU is powered by an 8-pin and a 4-pin, and the board has four memory slots with single sided latch arrangements. Down the right hand side of the board is a 4-pin LED header, a 24-pin ATX power connector, a USB 3.0 header, a Type-C header, and six SATA ports.

For the PCIe area, as mentioned the two main PCIe slots both come from the CPU, with x16 or x8/x8 connectivity at PCIe 4.0 bandwidth, due to the use of PCIe switches. Both of the main PCIe slots have extra reinforcement, and above the first PCIe slot is a PCIe 4.0 x4 M.2 slot, with its own heatsink. This isn’t connected directly to the chipset heatsink, however the second M.2 slot (a PCIe 3.0 x4 from the chipset) is connected. The final full-length PCIe slot is a PCIe 3.0 x4 from the chipset as well.

Along the bottom of the board is a 2-digit debug, two 4-pin fan headers, two RGB LED headers, two USB 2.0 headers, and the front panel headers. The audio codec on the left, ASUS’ custom S1200A codec, gets the SupremeFX treatment.