Even though there is a mATX version of the Pro4, the two boards are not variants of each other. The B550M Pro4 has a different layout of where the boards are by comparison, as well as a different arrangement on the rear panel. 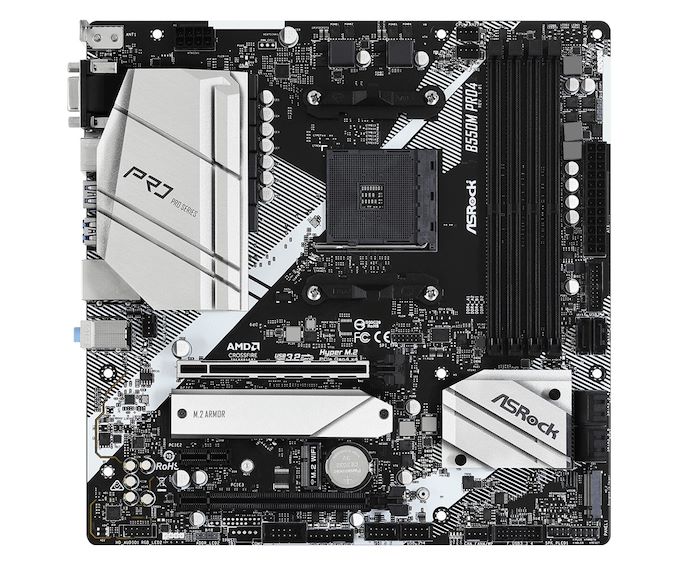 There is still the 75% rear panel cover over the top of the controllers from the back panel, also covering the power delivery (6-phase) this time, and the chipset heatsink / M.2 heatsinks are not connected either. The CPU takes power from a single 8-pin, and the socket has access to three 4-pin fan headers within reasonable distance.

To the right of the socket are four memory slots, all using single side latches as to not interfere when large bulky graphics cards are used.  On the right hand side of the board, at the top we have an RGB header, then a 24-pin ATX connector, then a USB 3.0 header, two vertical SATA ports, four regular SATA ports, and then a chipset based PCIe 3.0 x2 M.2 slot. 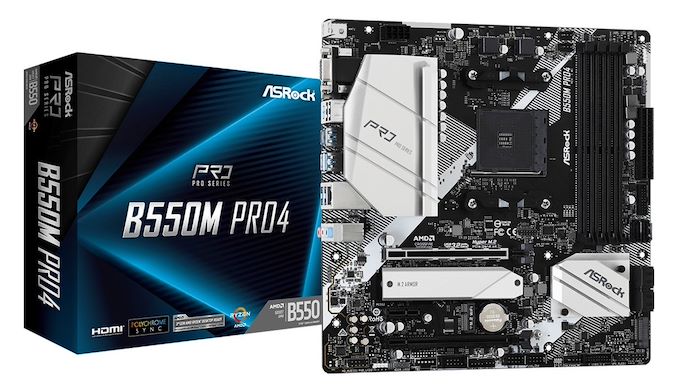 For the PCIe area, the top slot is a PCIe 4.0 x16 slot with additional reinforcement, and that sits just above the PCIe 4.0 x4 M.2 slot for storage, which has its own heatsink (but isn’t connected to the chipset heatsink). The board also has a PCIe 3.0 x4 full-length slot at the bottom, between which is a M.2 Wi-Fi connector for anyone to add in their own Wi-Fi card.

Along the bottom of the motherboard is the video output header, two RGB LED headers, a COM port header, three more 4-pin fan headers, two USB 2.0 headers, another USB 3.0 header, and the front panel outputs. On the far left is the audio solution, which uses an ALC1200 with PCB separation and some filter caps.