Starting off with the PC side of things, Intel was far more present at CES than AMD, which is what we expected given the higher level of involvement from Intel on the CE front.

During Craig Barrett's keynote on the first day of CES, one of the demos involved a media center PC (not MCE) showcasing an interesting method of navigating video content on the PC: using hand gestures. 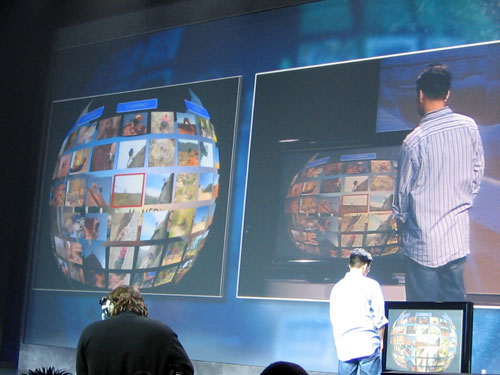 The spherical image on the left was basically your channel listing, with each one of those little windows displaying a full frame rate video stream, the sum of which was all of the channels you could possibly watch. You could rotate the channels left or right by moving your hands in the appropriate direction, and you could select which channel you wanted to watch by pointing at it. The demo wasn't flawless but Barrett promised that the technology being demoed was something that would be available 12 months from now.

Whether he was talking about every aspect of that particular PC or just its dual core Smithfield based processor is up to anyone's speculation. Unfortunately Barrett didn't disclose too much about the CPU specs of the system other than it was a dual core unit.

Luckily at Intel's booth we were able to get a glimpse of said system and found out it was a fully functional 90nm Smithfield running at 3.0GHz. It's about time Intel had a running dual core demo, it was beginning to look like only AMD would be able to pull off dual core. 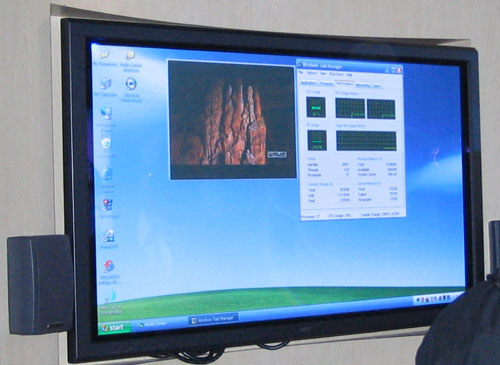 Task Manager shows the two cores in action, note that there is no Hyper Threading on Dual Core CPUs so there are only two physical CPUs listed

Bring up of Intel's dual core seems to be pretty strong and everything is on track for a release at the end of 2005. We did get confirmation that the dual core CPUs would not work on existing 925X and 915 based motherboards, not without changes to their design. While we would normally be disappointed, the fact of the matter is that very few people bought 925X and 915 based motherboards so it's not too big of a deal.

We also asked Intel if they had any tricks up their sleeve for regaining the definitive performance crown this year - unfortunately their answer was no. It appears that a lot of upper management at Intel is a bit astounded by the success of Centrino, noting that it is a full blown success achieved on features and a full platform and not purely performance. There's also this idea that performance right now is good enough for most desktop users, and fighting over a handful of percentage points that won't be appreciated is a silly battle to win. So for the near future at least, it seems like what we've published in previous Intel roadmaps is all we're going to see from them. What remains to be seen is if AMD will be able to continue to convert Intel's lack of focus on absolute performance leadership into marketshare for AMD.

Intel also seems confident that dual core will bring noticeable performance gains to the desktop user, citing that while application support may not be there that the OS and multitasking experiences will be greatly improved to the point that once you've used dual core you'll never go back. Having personally used multiprocessor systems as my main workstations for years now I can attest to the benefits of multiprocessors, however more than anything we're going to need a good way of quantifying the performance benefits with something else than an Intel script that runs an antivirus scan while you defragment your hard drive.